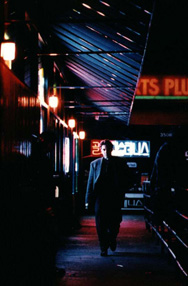 Michael Mann has emerged as the quintessential cinematic poet of the postmodern urban world. His films transcribe into narrative fiction film some of the more thoughtful observations about postmodern society offered by scholars such as Fredric Jameson and Mike Davis (1). But while Mann is obviously an erudite artist versed in literature and the fine arts who happens to work in the popular genres, his concern is not to make accessible academic theory, but to offer the American cinema’s most cogent observations about the fractured world in which we live. The city of Los Angeles, in particular, is a site of this exploration as it serves as the backdrop for several of Mann’s most important achievements (especially Heat, which appears to be his masterpiece at the time of writing).

Taken from a teleplay previously filmed by Mann (L.A. Takedown, 1989), and initially billed as “A Los Angeles Crime Saga”, Heat, contra its antagonists, isn’t a puffed-up, generic cops-and-robbers story replete with tired conventions (though these conventions are there – the overworked, too-dedicated cop and his neglected family life; the relentless, noir-like pursuit of a nemesis) but an authentic epic about social disintegration. We are shown Los Angeles as an archetypal postmodern city, replete with a gentrified, hi-tech downtown corporate citadel filled with skyscrapers wrapped in two-way mirror glass, and designed to project the notion that “we can see you, but you can neither see nor have contact with us”. This downtown is surrounded by miles of dying slums, the “multicultural” aspect of which would seem to be bourgeois society’s attempt, in its last gasp, to give validity to the fading notion of the melting pot. Mann’s L.A. is littered with the detritus (a word used by the wife of one of the central characters, Lt. Hanna) of post-industrial society: TV sets on rubble-strewn vacant lots occupied by the homeless; dead birds in sickly-green motel pools; near-abandoned communities festooned with satellite dishes; and, most alarmingly, human beings reduced to debris – a murdered teen hooker thrown nude into a garbage can.

Heat does indeed derive from older crime fiction, and from various conventions of the male-oriented action genres, especially the Western, but the film’s inflections of these conventions are both subtle and remarkable. Lt. Vincent Hanna (Al Pacino) is in obsessive pursuit of hoodlum Neil McCauley (Robert De Niro) and his “crew” of high-line professional bank robbers and hijackers. Crucial to this pursuit is the film’s erosion of the line between self and other, normal and abnormal worlds, a project also undertaken by the 70s horror film (e.g. certain works of George Romero and Tobe Hooper) and the best Westerns of the 50s and 60s (e.g. specific films of Anthony Mann and Sam Peckinpah). The self/other dichotomy is fused to an exploration of the male group, with the narrative exploring its homosocial/homoerotic dimensions, most famously observable in the remarkable pieta that concludes the film (featuring Vincent grasping the hand of Neil, who he has just mortally wounded). Hanna’s interest in McCauley is first highlighted early in the film, when underworld fence Nate (Jon Voight) tells Neil, “he [Hanna] likes you”, after Nate procures Hanna’s LAPD personnel file. Such affection shared between men appears throughout the film. Neil is concerned with the welfare of his young, blond sidekick Chris Shiherlis (Val Kilmer); he intervenes in Chris’ failing marriage to Charlene (Ashley Judd) less to save the marriage and protect his crew from Charlene’s indiscrete behaviour than to retain his relationship with Chris. Chris, in turn, gravitates to Neil (he camps out on the floor of Neil’s desolate seaside house); Neil rescues Chris from certain annihilation during the catastrophic downtown shootout after the aborted bank robbery.

The homosocial world that has for the most part defined the action-adventure genres stands rather nakedly exposed in Heat. The crucial emotional moments of the film concern men – most particularly the famous coffee shop meeting between Vincent and Neil – not men and women. Eady (Amy Brenneman) represents temporary solace and a sense of place to Neil (nostalgic talk of family and the past is central to their relationship). Vincent’s marriage to Justine (Diane Venora) is, in his own words, “a disaster”. Both Vincent and Neil preside over loosely-formed clans made up of the men in their lives (Neil’s crooks, Vincent’s cops) and their girlfriends/wives. The women are clearly peripheral, and unrelated to the fun/compulsions to which the men are repeatedly drawn.

The domestic scene, represented by the home Vincent and Justine share (Justine’s from her previous marriage), is portrayed as suffocating and filled with the ills of the postmodern world: Justine needs Valium to begin the day; Vincent’s prime solace is cable TV (which he finally rips from the wall and destroys when he learns of Justine’s affair, as if to destroy domesticity itself). As their marriage collapses, Vincent rants about the “dead-tech postmodern bullshit house” they occupy.

Eady’s presence almost prevents Neil from taking revenge on the psychotic, traitorous Waingro (Kevin Gage), but he finally chooses murdering Waingro over a life with Eady. Even Breedan (Dennis Haysbert), perhaps the narrative’s most desperate character, leaves behind his girlfriend and the prospect (a very corrupt, dubious one) of a new, “normal” life to join Neil’s crew.

Although Mann observes (on the DVD commentary track) that Neil is a “stone sociopath”, while claiming that Vincent is capable of empathy, the line between the two men, in particular regarding the codes of masculinity they represent, seems very thin. Both Neil and Vincent are brutal men: the initial attempt by Neil and his crew to kill Waingro correlates to the attack by Vincent and Lt. Casals (Wes Studi) on Van Zandt’s informant (Henry Rollins). Both men are governed, marginally, by the codes of conduct informing their respective social groups. These codes, like the organisations generating them, seem on the verge of collapse. At the end, both Neil and Vincent are alone, less, I think, to showcase the “final showdown” to which the drama has been moving than to emphasise their alienation from domesticity and forms of male organisation alike. While Heat is very much a work about men without women, or rather men who prefer the company of other men to that of women, it is also concerned with a male group at the end of its road. Mann makes considerable use of the convention of the Last Stand, a basic Western trope that was given a new turn by Peckinpah. Neil’s gang knows it is under surveillance, yet robs the bank anyway, resulting in the hyperreal shootout in downtown L.A. that decimates it. Cheritto (Tom Sizemore) is killed, and Chris, who is badly wounded, eventually drifts into the night alone, his wife Charlene in police custody. One could say that the film is confused in its feelings about the death of the male group> This is unless one sees a heartfelt despair for the homosocial world, the violence that always replaces eroticism, and the inability of men to see the collapse of the patriarchal-capitalist project within the narrative. The final shootout, which seems so out of place in a major city, can be read as both the culmination of male assumptions and a glimpse of what still awaits humanity. Mann’s portrayal of gun violence in this operatic scene has some affinities with the work of Peckinpah. While The Wild Bunch (1969) comments on the conventions of violence throughout the history of the Western, Heat observes the culture of “reality TV” and news shows that spectacularise urban violence.

The element of despair gives Heat, and other Mann films, a peculiar angoisse, emphasised in part by Mann’s striking compositions and their extraordinary wash of cold blue/grey tones. Lonely men against empty backdrops are a feature of Mann’s work. In Heat, a shot featuring Neil standing alone by a large bay window, a handgun on the table in the close foreground, is a signature image of Mann’s work. Such images recall postmodern paintings by Eric Fischl and Robert Longo, suggesting the emotional bankruptcy of bourgeois life in the post-industrial moment (2). Mann’s meticulous selection of music is also basic to the anguish that suffuses Heat. The work of Lisa Gerrard, Moby, Kronos Quartet, Einstürzende Neubauten, Brian Eno, and Mann’s composer, Elliot Goldenthal, produce the effect both of hysteria (associated, it seems, with male disempowerment) and a requiem. Requiem may indeed be the dominant form of Mann’s work, most appropriate for the civilisation he surveys.