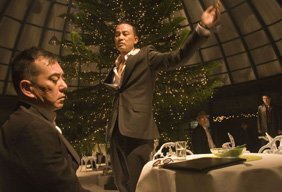 [Exiled] has a kind of romanticism about it, and it’s all about the rhythm and music of the action scenes. (1)

The prolific output of Johnnie To often brings to mind the similarly productive Claude Chabrol. Both men remain committed to popular narrative genres as an endlessly exploitable medium, and release films with a frequency that leaves one breathless, for as soon as one feels one has caught up, another title by one or the other of them emerges. Both men have also inhabited the separate precincts of the art-house and the habitat of the hoi polloi, although To has only more recently become familiar fodder on festival schedules. Last, their work commonly seems to go through cycles of excellence and exhaustion, although they currently share in a period of almost uninterrupted success.

To’s recent work has explored with a virtually anthropological attention to detail the inner workings of both the police and the triad gangs. PTU (2003), Election (2005) and Election 2 (2006) exhibited his skills as deftly as any work in his resume. The latter set of pictures also kick-started his visibility in the West to a new level virtually overnight, as distributors caught on to his portfolio. Whereas once an avid fan had to satiate his or her needs with import DVDs purchased through an Asian importer, now To is available from established commercial outlets. Admittedly, those companies have not mined the extensive back catalogue of To’s Milkyway Image production company, and seem likely, if they choose to do so, to favour the crime narratives over the comedies or the period films or the transgressive landmarks of the late 1990s, like Expect the Unexpected or The Longest Nite (both Patrick Yau, 1998).

Exiled provides all the requisite elements of what both the critics and the distributors admire about To’s work. Advance news about the picture boasted of how it reunited To with the lead actors of his groundbreaking masterpiece, The Mission (1999): Anthony Wong, Francis Ng, Simon Yam, Roy Cheung and Lam Suet. Superficially, this comparison holds water, but the two films remain remarkably different in tone, visual style and theme. The Mission remains an exercise in maximum sangfroid, dispensing only as much information as its anecdotal plot requires. Like other operators in the crime story domain – Jean-Pierre Melville and Walter Hill come to mind – To dispenses with any semblance of backstory and ruthlessly excises any disposable flourish that might make his protagonists something other than the sum of their actions. His characters convey their personalities gesturally, as in the sequence where the manner in which each man bats about a crumpled piece of paper like a homemade soccer ball, defines their essence. Also, as many critics have remarked, To rejected in this film the bravura display of action common to the work of John Woo and Tsui Hark and replaced it with a more pared-down visual palette. To’s bodyguards stood their ground, as did his camera, while the assassins they pursued exercised their homicidal energies about them. The film conveys a stiff upper lip thematically and visually, as well as managed to possess a kind of curdled satire of yi, the code of brotherhood, which serves as the philosophical support system of his characters.

The clamped-down atmosphere of The Mission lifts virtually altogether in Exiled. Whereas the earlier film curbed any inclination toward effusiveness, here To’s camera and his characters revel in their abandon. It seems conceivable that the new film contains twice as many shots as its predecessor, and the camera often sinuously travels about the action with a kind of Altmanesque insatiability for information. While the lead actors do not play the same characters as before, they do retain, by and large, the earlier film’s embodiment of interiorised aggression. However, just as often, Exiled drops the safety net of sangfroid for a kind of giddy camaraderie. First we shoot at one another; then, we sit down and stir-fry a lavish meal. The aftermath of a masterfully executed robbery of an illicit gold shipment finds the quartet exchanging light-hearted dialogue about what kind of future their booty will buy. In this alteration between the comic and the chaotic, To brings to mind both Sergio Leone and Sam Peckinpah. His bad boys inspire in his audience a contradictory impression of fearsome homicidal hunger crossed with a virtually childlike propensity for playing with lethal weapons.

The four protagonists – Blaze (Anthony Wong), Fat (Lam Suet), Tai (Francis Ng) and Cat (Roy Cheung) – meet up in a residential neighbourhood in Macao. The first two have been hired by Boss Fay (Simon Yam) to execute Wo (Nick Cheung) for his earlier attempt on his life. The latter pair appear in an effort to stop their compatriots from achieving their objective, and circumstances prove almost immediately that the claim of yi supersedes any pre-existent contract. The group instinctively pools their resources and their guns to protect their friend, as well as his wife, Jin (Josie Ho), and young son, even though Blaze admits that he will eventually have to follow through on his original mission.

In order to secure a future for the family, the men hire themselves out to Jeff (Siu-fai Cheung) and accept a mob hit that unsurprisingly turns out to be something other than what they expected. They collide with the easily agitated Fay, and Wo is wounded in the process. In perhaps the most bravura sequence of the film, the set of antagonists meet once again at the same doctor’s office. To displays a masterful knowledge of how to stage action as well as manipulate the space of the frame. The shots that end the scene as the survivors escape from the rear of the doctor’s residence combine a masterful acquaintance with action and an astute eye for evocative visual information.

Needless to say, the outcome of the conflict must end apocalyptically, as it would in the work of To’s predecessors, Leone and Peckinpah. The director disposes with the final surprise of The Mission for a scintillating shootout. Like the other men, he celebrates his protagonists but also injects the clear sense that they are dinosaurs in the emerging political realities of an Asia where lawlessness cannot be so easily tamed by a man with a firearm and a finely honed set of rules of conduct. The film’s interjections of humour, and its intentionally over-the-top physical action, do not communicate the lingering sense of entropy and emptiness that marks Election and Election 2. Here, To plays with the parameters of genre like a masterful technician, but seems disinclined on this occasion to dissect that behaviour.

Accordingly, Exiled remains undeniably entertaining and altogether satisfying as an exercise in savvy filmmaking, but does not feel like first tier To. It comes across like a kind of running in place without the necessary karma that has often inspired To in the past. Yet, considering his prodigality, one can only hope and expect surprises in the future. The recent announcement of a collaboration between the director and the iconic actor Alain Delon leaves one with bated breath for what the two might conspire to achieve. Until then, after the smoke clears, the mother and child have fled the scene and the villains received their deserved comeuppance, To will survive to shoot many, many more films.