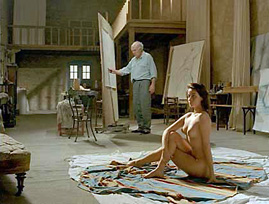 If it is the male who represents, it is the female (though not of course exclusively) who is represented: the artist/model relationship is archetypally a male/female relationship. It would be silly to argue that the whole traditional function of art has been to inscribe women in their places under patriarchy, but this is clearly one of its traditional functions, and a major one.

The function, care, and passion of the philosopher is the negentropic carillon of the possible.

La belle noiseuse is a film about revision, and its chief motif is the palimpsest. The artist Frenhofer’s (Michel Piccoli) “point-of-no-return” in the narrative is to paint over a “failed” portrait of his wife Liz (Jane Birkin), with the form of a new model, Marianne (Emmanuelle Béart), though Liz’s residual features can’t be completely obliterated. In long, often uncut sequences, we see Frenhofer start, review and rework sketches; even his method of working from scratch is a kind of revision, as he hacks forms like a sculptor working with lines, then “de-forms” them with daubs of black paint. Something of this affects the workings of the narrative, as characters tell stories, adopt roles, and stage situations, keeping our perceptions of their personalities and histories in flux.

The palimpsest is also a figure for La belle noiseuse itself, and Jacques Rivette’s work and methods as a whole. Balzac’s original 1831 story, “Le chef d’oeuvre inconnu” (the hidden, unseen, unknown, or unknowable masterpiece), was extensively reworked by the time of its “definitive” 1837 version (3), and was subsequently “illustrated” a century later by a Picasso “haunted” by the story (4). By this time the story’s meaning had changed from a parable about an over-reaching, “half-mad, half-sublime old painter” (5), whose alchemical attempt to paint a portrait so real you would think its subject alive actually destroys the original representation, to a prevision of the heroic modern artist, wrestling with tradition and forms to create newer, more true ways of seeing (6). French philosopher Michel Serres expanded on this in his essay “Noise”. He returned the painting’s title, “La belle noiseuse” (usually translated as “the beautiful nutgirl” [7] or “pain in the ass” [8]) to its etymological roots as “noise”, “sound and fury” (9). Frenhofer’s “ruins”, in which only a perfectly formed foot remains from a “chaos of colors, shapes, and vague shadings, a kind of incoherent mist” (10), are for Serres the “infinite possibilities” (11) available to the artist before he limits himself to one particular image, order, structure (12).

Rivette’s film, which has its roots in a monologue about Frenhofer in his previous work La bande des quatre/Gang of Four (1988), is a revision of Balzac’s revised story, via the interventions of Picasso (with Piccoli the image of that artist in late middle-age) and Serres (Frenhofer has a speech early in the film about the creative power of “noise”) (13). Rivette is himself a notorious reviser: due to financial and logistical problems, the three-year gestation of his debut feature, Paris nous appartient (1960), led critics to suspect he couldn’t actually finish a work, a doubt dramatised in many of his films, where artist-figures (e.g. the theatre directors of Paris and L’amour fou, 1969) fail to mount agonisingly thought-over artworks. His films are also heavily reworked at the editing and sound-design stages: both the 13-hour Out 1: noli me tangere and the four-hour La belle noiseuse exist in shorter versions (Spectre [1972] and Divertimento [1991] respectively, the latter compiled entirely from out-takes [14]), neither of which are mere digests of longer originals, but significantly rework their structures, emphases and characterisations. Finally, Rivette’s most famous film, Céline et Julie vont en bateau (1974) is celebrated for the creative control given its actresses, Juliet Berto and Dominique Labourier, who would work on the script each night before shooting, causing the film to bifurcate in unexpected and seemingly uncontrolled directions (15).

Comparison with Céline et Julie, however, makes La belle noiseuse look like a regression to an older, more (male) auteur-centred tradition of art-house cinema. In this film Frenhofer, the middle-aged male artist, paints a nubile young woman. Béart spends much of the movie naked, to be gazed at by both the clothed artist and the audience, her body moulded or reshaped by Frenhofer (16). As a model, Marianne’s “presence” is “arranged” by three men without her consent (or even knowledge): as a form of sexual transaction (17) suggested by frequent associations of Frenhofer’s “strength” or potency with his painting; through her artist boyfriend Nicolas’ (David Bursztein) fears that artist and model will begin an affair; and by Julienne’s (Marianne Denicourt) comparison of the offer of a job by an admirer to prostitution. It could also be argued that some of the film’s scenes of painting dramatise acts of aggression on representations of women.

These works, which may be called self-creating, appear to be generated by one of their characters and they thus document their own coming-into-being. The central character of such stories is generally an artist figure who is involved in creating a work in which, it turns out, he is a character. He is simultaneously creator and protagonist and the work that he labours to produce during the course of the narrative is revealed to be the work that we are experiencing. Therefore, although the character is, of course, generated by the text, it appears that the text has been generated by the character. The autogamous narrative becomes an account of its own birthing process: its own construction becomes both its central theme and its structural principle. (18)

On the surface, this might seem to fit the idea that La belle noiseuse’s story is about Frenhofer, the “lone artist struggling toward some creative empyrean” (19), whose “La belle noiseuse” becomes La belle noiseuse; but it is really the “coming-into-being” of Marianne the model, a figure whose character is built up from its minor part in Balzac’s story. She is the true creator in La belle noiseuse, a writer whose narration frames and shapes the film (withholding information, and commenting on, explaining, and constantly revising it). The film ends not with the climactic unveiling of “La belle noiseuse” (itself a replacement for the “real” painting we never see, whose status as weary failure or penetrating masterpiece is left deliberately undetermined), nor the closing regrouping of all the characters and narrative threads, like might be found in an 18th century play or a detective story (both important touchstones for Rivette). The final image focuses on Marianne, smiling privately, an anti-Molly Bloom as she exclaims “non”: this is a positive negation, a suggestion of future possibilities (Serres’ “noise” again), maturation, and a rejection of others’ plans for her.

For all that, it’s difficult to claim La belle noiseuse as any kind of feminist statement. Compared to the loose-limbed Céline et Julie, it feels like a very scripted, composed film, its exquisite camera movements and placement of characters in space heavy with Tarkovsky-like deliberation. Yet this surface pomposity is pinched by Rivettian mischief. Balzac’s story was originally subtitled a “conte fantastique” (20), and Rivette’s films have always underlaid surface realism with intimations of the uncanny. The film’s locale is a mysterious, fairy-tale building – part-castle, part-church, part-convent, part-torture chamber – full of passage-ways, staircases and balustrades leading to hidden places (21), and from which characters can watch the stilted, theatrically staged and scripted “action”.

Like the murderous family in Céline et Julie, the inhabitants of this haunted house can be read as ghosts or the undead (22): Frenhofer is introduced by his absence (his failure to keep an appointment), and is also a dishevelled, mentally-broken shadow of his former self, who carries a dead bird (Liz, also an artist, stuffs rare birds); Frenhofer and Liz frequently refer to themselves as “dead”, a late scene showing them lying flat and still on a bed with moonlight casting a tombstone-crucifix over their bodies. The film’s space itself is largely bare, often sepulchral, the action that occurs within it static, as if these characters are doomed to speak and act in similar ways for eternity, unless, perhaps, exorcised by a young heroine, who has herself been rescued from death (suicide). When the painting is finally unveiled, Frenhofer declares it his first posthumous work (and Liz signs it with a black cross). There are many echoes of works of the fantastic: Poe’s tales of life-sucking artists and the walling up of living women, in particular; Hitchcock’s Psycho (1960); and the presence of a cat at significant moments recalls the animal’s use as an emblem of the fabulous in Céline et Julie.

Time has always been recognised as the major structuring element in Rivette’s work (23). Like a fairy-tale, the action of Noiseuse takes place over three days; time distends, as the film concentrates on “the development of the [painting], the creative process rather than the finished object” (24). Long takes alternate with unexpected cuts and ellipses, to the point where Marianne declares “I lost the notion of time”. This is, after all, a 20th century update of a 19th century story set in 1612, dramatised in a present tense haunted by the past and narrated from the future.