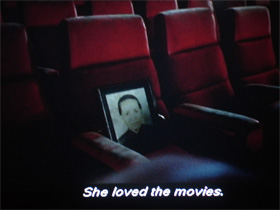 [T]he work in the mirror and the work in the seed have always accompanied art without ever exhausting it […] By the same token, the film within the film does not signal an end of history, and is no more self-sufficient than the flashback or the dream: it is just a method of working […]

To commemorate the 60th anniversary of the Cannes Film Festival in 2007, Gilles Jacob commissioned a group of 33 well-known international directors to each make a three-minute film capturing their feelings about “the motion-picture theatre” (2). The interpretations of this assignment (3) vary in ways that are interesting: some are about the cinema in general, but most reflect on the conditions of viewing: in other words, the physical “salle de cinéma” itself. Many include a film-within-a-film, mostly classic European arthouse films (by Jean-Luc Godard, François Truffaut, Robert Bresson and the film’s dedicatee, Federico Fellini), either on-screen, as accompanying sound, or as intertext. Some are melancholic regarding the death of cinema (David Cronenberg’s At the Suicide of the Last Jew in the World in the Last Cinema in the World), yet others are cloyingly “heartwarming”, in the vein of Nuovo Cinema Paradiso (Giuseppe Tornatore, 1988). The three-minute constraint (Théo Angelopoulos literally titles his short Trois Minutes) seems to necessitate “invocation” of the cinema’s power or allure, in other words each director’s “sense of cinema”.

The brevity of these vignettes sometimes means they run the risk of cliché (including cliché auteurist trademarks (4)). Some of the directors seem to have embraced this, choosing to tell a short “joke” complete with a punchline (“a man walks into a movie theatre …”), such as Roman Polanski’s Cinéma érotique or Manoel De Oliveira’s Recontre unique (Sole Meeting). But beyond the stereotypes of cinéphilia – Nanni Moretti’s Diario di uno Spettatore (Diary of a Spectator), Takeshi Kitano’s One Fine Day – something more akin to a genuine cinema “fetish” emerges, whether in the truly Freudian formula of “I know cinema is dead, but still … [I love it]”, or in the repeated motif of the motion-picture theatre’s intimate connection with sexuality, its dark atmosphere saturated with desire, arousal and contact. (5) Andrei Konchalovsky’s Dans le noir (In the Dark), Wong Kar-wai’s I Travelled 9000 km to Give It to You and Gus Van Sant’s First Kiss are the most explicit (risking soft-core porn cliché, Van Sant’s frankly stupid film worst of all); Polanski’s Cinéma érotique and Atom Egoyan’s Artaud Double Bill are more ironic; but perhaps the most “erotic” pieces are Olivier Assayas’ Recrudescence (Upsurge) and Jean-Pierre and Luc Dardenne’s stunning Dans l’obscurité (Darkness), both of which combine sexuality with dexterous theft (in the manner of Jean Genet or Bresson’s Pickpocket, 1959).

Many of the short films in Chacun son cinéma call to mind Roland Barthes’s essay “Leaving the Movie Theater”, where Barthes describes being

fascinated twice over, by the image and its surroundings – as if I had two bodies at the same time: a narcissistic body which gazes, lost, into the engulfing mirror, and a perverse body, ready to fetishize not the image but precisely what exceeds it: the texture of the sound, the hall, the darkness, the obscure mass of the other bodies, the rays of light, entering the theater, leaving the hall […] (6) 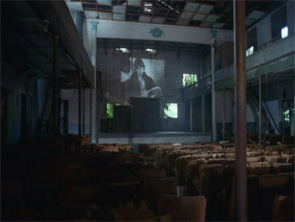 It is apparent that many share a strong “cathexis” to the actual movie hall itself: the red auditorium chairs, the dust-motes in the cone of light from the projector, the architecture of old theatres. Rows of theatre chairs play a major role in Tsai Ming-liang’s It’s a Dream (7), shot in a theatre in Kuala Lumpur, occupied by a family sharing and eating durian fruit, and a woman who shares pears on a skewer with the man sitting in the row behind her, in a wordless moment of contact between strangers that is typical of Tsai’s body of work. Tsai’s contribution is like a microcosm of his feature-length ode to the cinema, Bu san (Goodbye, Dragon Inn, 2003). It’s a Dream and Tsai’s other short film, Tianqiao bu jianle (The Skywalk is Gone, 2002), testify to his ability to use old songs to perfectly capture a bittersweet feeling, and prove that brevity need not equal glibness. Likewise, decrepit theatre chairs take on an almost monumental, mournful cast at the conclusion of fellow Taiwanese director Hou Hsiao-hsien’s The Electric Princess House, which starts as a period piece during the heyday of the movie house, but ends with Bresson’s Mouchette (1967) playing in the abandoned theatre like a ghostly apparition. Chen Kaige’s Zhanxiou Village is a more lighthearted, perhaps too cute, period film about boys watching an old Charlie Chaplin film, using their bicycles to run the projector’s motor. Fellow “Fifth Generation” Chinese director Zhang Yimou’s En Regardent le film (Movie Night) is similarly “touching” in its portrayal of youthful enthusiasm for the magic of film, cleverly allegorized during a pause due to technical problems, when the shadows of two men eating their supper are projected on the screen like a puppet or magic-lantern show. Rey Chow has argued that this particular ethnographic mode reveals how many discovered what it means to “be Chinese” by watching film: “National self-consciousness is thus not only a matter of watching ’China’ be represented on the screen; it is, more precisely, watching oneself – as a film, as a spectacle, as something always already watched.” (8) Raúl Ruiz provides a tongue-in-cheek surrealist take on the cliché of Western anthropologists’ introductions of film technology to “tribal societies” in Le Don (The Gift), but a quality of critical ethnography can be seen in many of the non-Western European contributions to this “homage to Cannes”: Walter Salles’ A 8 944 km de Cannes (5,557 Miles from Cannes) most obviously, Raymond Depardon’s Cinéma d’Eté (Open-Air Cinema), Elia Suleiman’s Irtebak and Michael Cimino’s No Translation Needed more implicitly.

While each film is relatively “international”, cross-cultural relations are directly addressed in Bille August’s The Last Dating Show, and the impact of politics and war on moviegoing is foregrounded (rather heavy-handedly) in Amos Gitai’s Le Dibbouk de Haifa (The Dybbuk of Haifa) and Wim Wenders’s War In Peace, where young men watch Black Hawk Down (Ridley Scott, 2001) in a ramshackle movie theatre in an otherwise finally peaceful town in the Congo. While Wenders focuses on an almost exclusively male audience, by contrast Abbas Kiarostami’s Where Is My Romeo? lingers over the teary-eyed expressions of women watching the classic tragic romance (this feminine “weepy” cliché is another common thread among several shorts, a rather hackneyed illustration of film’s power to move an audience).

Jane Campion overtly treats gender inequity in her rather satirical contribution, The Lady Bug, which is apt given her position as the only female director in a collection which otherwise prides itself on its diversity (33 directors from 5 continents and 25 countries; but significantly translated “to each his own cinema”). Some might ask why another prominent woman director, Claire Denis, was not included, but the exact criteria for selection/contribution are rather hard to reconstruct. The Guerilla Girls would surely have more to say on this topic. (9)

The problem of class occasionally makes an appearance – as in Aki Kaurismäki’s clever La Fonderie (The Foundry), in which factory workers break from work to file into a theatre to watch the classic Lumière short of workers leaving the factory – but the rest are generally rather petit-bourgeois films.

Finally, there are those directors who interpreted the assignment to be about Cannes itself: Youssef Chahine’s 47 Ans après (47 Years Later) and Lars von Trier’s brutal attack on those who talk during screenings, Occupations. But while talking before, during and after films is featured more favourably in some of these shorts – Claude Lelouch’s Cinéma de boulevard (The Cinema Around the Corner), Ken Loach’s Happy Ending – the other major preoccupation revealed in many of the films is with blindness – especially in Ruiz’s The Gift, Chen’s Zhanxiou Village and Alejandro González Iñárritu’s Anna. Perhaps this is an inevitable fascination for filmmakers and photographers (10), but it seems particularly salient for this invocation of cinema as an atmosphere rather than as image, which fetishizes “not the image but precisely what exceeds it” (as Barthes put it). The best out of this mixed bag of films manage to evoke this sense of cinéphilia as excessive love of the cinema. The alternate title – “that thrill when the lights dim and the movie begins” – implies both light and darkness, projected image and surroundings, visual pleasure and theatre-going jouissance.