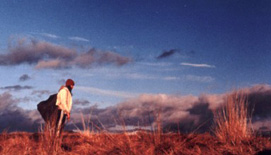 Inaugurating the first year’s work of the new Centre for Film Studies at the University of St Andrews, the prestige of this conference was not to be underestimated. It was a humbling experience as a postgraduate student to be engaging in close critical debate with the internationally distinguished film scholars present: Hamid Naficy, Laura U. Marks, Patricia Pisters, Mette Hjort, John Caughie and Pam Cook, to name only a few. The theme of Cinema at the Periphery was a universally engaging one, raising cogent questions about the nature of cinema and its relations to nationhood, migration, subjectivity and authenticity, itself closely linked to the research interests of the Film Studies Department. Comprised of Dina Iordanova, David Martin-Jones, Graham Petrie and Belén Vidal, and postgraduate students Canan Balan, Ruby Cheung, David Fleming, Lars Kristensen and Vlastimir Sudar, all the members of the department work in some way on cinemas or cinema methodologies beyond the reach of traditional, Hollywood or western European cinematic narratives.

The majority of the assembled academics had looked far beyond their national borders and discovered rich sources of research from cultures and countries far distant to their own. This spoke volumes, both in the sense that delegates had travelled from New Zealand, Canada, France and the United States, and that their countries of origin were even more diverse. Such diversity demonstrated in itself the generative possibilities of working peripherally, with the unfamiliar, the subaltern and the minor.

The first day of the conference concerned itself with the filmmaking industry and transnational realities in the conditions for filmmaking and film culture, with excellent papers given by Mette Hjort, Rod Stoneman, Duncan Petrie, Sheldon Lu and Lùcia Nagib. These papers engaged with the conditions of filmmaking today, across the world, where film industries may struggle even to reach distribution – including the status of television and film in England today (Rod Stoneman). Mette Hjort investigated the notion of homophilic transnationalism, where transnational film initiatives have been taken up by countries with shared cultural references, such as the current collaborations in Denmark and Scotland. By contrast, Duncan Petrie illustrated the example of New Zealand as a small national cinema both liberated and limited by its international visibility. Sheldon Lu’s paper explained how almost all Chinese independent filmmaking equates with underground filmmaking, where DVDs are sold on street corners as a sole means of distribution, recontextualising one notion of periphery as those films that quite simply struggle to be seen. Lùcia Nagib drew upon the Japanese erotic prints of the shunga and the films of Nagisa Oshima and Kazuo Hara to illustrate forms of erotic spectatorial engagement that eschew the position of passive viewer.

The sub-theme of Day Two examined the narrative and contexts of thinking through film and the periphery, and what form liminal or marginal filmmaking might take. Laura U. Marks and Faye Ginsburg both offered an insight into the continued political significance of marginal filmmaking, and its constant tension between the desire to represent the underrepresented (such as Ginsburg’s explication of the cultural links that first nations across the globe are forging because of their filmmaking) and the very different, but highly interdependent demands of western and non-western audiences. Both Dudley Andrew’s extensive overview of waves of national cinemas and Bill Marshall’s discussion of cinemas of Minor Frenchness continued to highlight the precarious position of the peripheral as a position from which to produce a cinematic “voice”.

The third day of the conference, subtitled “Iconography/Identity”, emphasised the pluralism of the periphery and peripheral cinemas. Both John Caughie and Patricia Pisters emphasised the potential for identities, even peripheral ones, to be transformed into monolithic forms and nostalgic memories, such as the risk of heritage cinema taking over the notion of national cinema, as Caughie remarked in the course of his paper on Morvern Callar (Lynne Ramsay, 2002) and Scottish cinema. Nonetheless, in an exposition of the multiple layers of cinematic temporality in the filming of Tanger as a city, Patricia Pisters’ paper suggested also that by treating Tanger as a social cinematic text, its ambivalence allowed for a multiplicity of identities to emerge, both nostalgic and ambivalent. In a more director-based approach, Pam Cook investigated the complex relationships of Baz Luhrmann between Hollywood and Australian cinema, while Hamid Naficy’s more historical analysis gave an intriguing view into an Iran of the past where the drive to modernisation triggered a wave a filmmaking and film distribution that rests starkly at odds with the current regime, and predates the emergence of Hollywood. Kristian Feigelson’s paper developed the notion of the Glocal cinema – both engaging with the local while recognising the cultural influence of the global.

After three days of intensive engagement with peripheries, national and transnational cinemas, with the rigours of academic analysis and the pleasures of watching films themselves, it was not frustrating, but rather illuminating to find that we had come no nearer to a conclusive explanation of how to come to terms with peripheral cinema. The members of the conference were for the most part agreed that cinema at the periphery no longer needs to assume a dichotomy where smaller cinemas are peripheral to the “central” Hollywood and Western European Cinema. Nonetheless, the interplay between cinema and its cultural predecessors, between internationally dispersed funding and filmmaking institutions, between the very new, such as the work of “post-war” Lebanese documentary filmmakers (Laura U. Marks) or indigenous and first nation short filmmakers (Faye Ginsburg), and the very old, such as Iranian silent film (Hamid Naficy), suggested a much more delicate and shifting notion of periphery. Are these peripheries generative grounds for a new way of seeing cinema, and through the lens of cinema, our world? And how do we engage with such peripheries?

Certainly the last of these questions was answered – the complexity of papers and the manner in which they drew across geographies, timespans, even across the very notions of the real and the virtual allowed for multiple engagements with a cinema or cinemas of the periphery. Nonetheless, my own research interests drew me to a particular undercurrent of theoretical work within the conference. If notions of similarity or comparison, of centre and periphery are unhelpful in finding ways to drive forward research in film, then perhaps it is possible to think a periphery through something other than a spatial or geographical context. Could thinking the periphery transform questions of space into subjective questions of time, virtuality, actuality and shifting subjectivities?

Some of the key modes of thinking about peripheries have a natural affinity with the relational philosophies of Gilles Deleuze and Felix Guattari, where “positions” are replaced by relationalities, with a pure potential for change, difference or movement. Indeed, the conference offered the occasion to celebrate the launch of David Martin-Jones’ book, Deleuze, Cinema and National Identity. Certainly, Deleuze’s work on film, and his philosophical strategies such as the molecular, non-subjective individuality, and experiential planes of immanence became evident as a viable means of negotiating, but not negating, cinemas at the periphery. Several eminent scholars elaborated upon Deleuze’s theories in conjunction with their own fields of enquiry – Patricia Pisters, Laura Marks and Bill Marshall in particular, took creative routes through what might be described as screen methodologies, carefully interweaving a Deleuzian philosophy of temporality and subjectivity to explore new avenues for film, from Arab cinema to the cinema of Quebec.

Marks’ paper was particularly startling in its innovative drawing-together of images, signs and experience using Peircian and Deleuzian terminologies, to elaborate on the curious, confusing status of contemporary Arab cinema. Balanced precariously between the double-scrutiny of the foreign funding bodies with a pre-emptive desire for filmmaking that re-presents the Arab world to the western world, and the acute and critical awareness of this motivation in Arab spectators, Marks argues that filmmakers nonetheless manage to produce films of great delicacy, where images emerge from and return to an imperceptible jumble of information and counter-information – a plethora of layered images without signs, or signs without images. 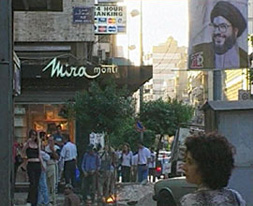 The film screenings were especially fruitful arenas for discussion, in particular given that three out of the four films screened during the evenings were documentaries. In hindsight it was interesting to see the scenario envisaged by Marks pre-emptively played out in response to one of the invited filmmaker’s documentaries, Mohamad Soueid’s Civil War (2002). The documentary genre is particularly insightful, both in terms of the limitations imposed by establishing footage in particular locations at particular times – as recordings of “peripheral” lives – but also meta-cinematically in terms of their layered interactions between the virtual and actual worlds of the film recording, the edited diegesis and the audience response. Civil War provoked some heated responses, in particular with regard to how one can respond authentically to the very personal history of Soueid’s work, if one knows little about the broader context of the subject matter, ostensibly the aftermath of the Lebanese Civil War.

Soueid’s gently crafted documentary did indeed prove difficult to assimilate into information (to use Marks’ terms), but to assume that this was its aim is perhaps misguided. In treating his central question – what happened between his friend, the cameraman and artist Mohamed Dou’aibas – his camera also rests gently on the traces of war – from a female dentist explaining the stress-induced wave of terrible dental decay in Lebanon to static shots of the open mouths of broken pipes. Soueid literally projects the face of Dou’aibas across the Beirut of his film, in the debris, on stripped billboards, in broken windows, while a sea of faces swarm through the streets, sometimes pointing at his camera, sometimes unaware of it. Grief makes itself manifest in a temporal layering of the already-dead past and the filmic present. Convergent lines of narrative – the Lebanese post-traumatic condition, and the personal eulogy to a close friend, break on layered surfaces of the images, and the tenderness of Soueid’s investigation into the suspicious circumstances of Dou’aibas’ death cannot help but stir a delicate affect, in spite of, or perhaps because of, an inability to fully comprehend the social-political context of the Lebanese Civil War. The title of the film would seem to signal this – that there is an incommensurable distance, and yet multilayered relationality between the personal and the historical. Viewed in this light, more conventional criticisms of authenticity and contextual knowledge seem less essential in experiencing, appreciating or discussing peripheral filmmaking.

As Laura Marks commented in her paper the following day, Soueid’s film does not offer a framework of understanding such as historical context. As Marks explained, the film does not tell us how to understand civil war, but allows for the unfolding of small peaks of experience that we can grasp onto, and one of those forms of apprehension may well be affect. Such openness and delicacy not only seems to evoke cinema at the periphery, but a cinema of the periphery, opening up new lines of cinematic thinking and cinematic seeing. Perhaps the greatest contribution of this conference to film studies is the notion of a decentred, peripheral vision that neither ignores nor displaces the importance of the periphery in our twenty-first century cinematic world.