One must eliminate the effects of imprecise distributions, the uncontrolled disappearance of individuals, their diffuse circulation, their unusable and dangerous coagulation.

In discussing Le Trou, Jacques Becker and his admirers insist on its fidelity to “so-called facts” (2). The narrative – in which a group of five men attempt to escape La Santé prison through its sewers – is based on a “completely true” story. The script was co-adapted from his novel by ex-prisoner José Giovanni; one of the original escapees, Jean Keraudy, introduces the film and plays Roland, the character given the most moral weight. Le Trou was shot on location, and on studio sets meticulously supervised by three “technical experts” who had participated in the original escape to ensure “authentic[ity]” (3). Becker cast unprofessional actors in the major roles, emphasised the repetitive routines of prison life, and used (often relentlessly) long takes to prove that these actors, without cuts, doubles or trickery, are performing the laborious tasks we are shown, hammering through floors and concrete walls, their breathing “heightened” (4). Until the closing credits, there is no music to soften the austerity of plot and place. 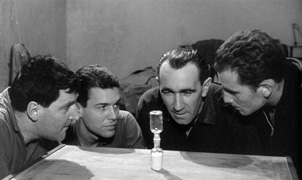 Despite its many documentary-like sequences, it would be a mistake to classify Le Trou as some sort of sombre docudrama. Actions and glances are privileged over psychological or social context. This makes the film, for all its urgency, feel curiously ahistorical. The world of Le Trou may be “a world of consciousness” (5), but there are ways in which Becker manages to evoke the uncanny, the marvellous, the “private, timeless” inner life of the collective (6). There is a clear demarcation between the main spaces of the film: the prison in which the men are caught, and the underground territory through which they hope to escape. One could describe this in old-fashioned psychoanalytic terms: the prison space is the conscious, everyday level, where every action is socially scrutinised; the labyrinth of corridors and sewers below is the nocturnal unconscious, where the men can roam and play.

The harsh, flat lighting and framing of the prison sequences, where everything is visible, or is made visible, give way to an underworld evoking the flickering shadows of Fantômas (Louis Feuillade, 1913-14); the melodramatic milieux of Sue’s Les mystères de Paris (1842-43) and Dumas’ The Count of Monte Cristo (1845-6); the physical play of the circus (as when Roland and Manu [Philippe Leroy]) clamber atop one another to avoid discovery by guards); the unleashed, yet banal sadism of ordinary functionaries (the spider-feeding scene); and the “mysterious epiphan[y]” (7) where two prisoners finally open a manhole (mirroring dormer windows/attic doors on the roofs in many classic French films) to gaze on a Parisian street, the only time since the establishing shot the film leaves the prison – a process of “making-extraordinary-the-ordinary” equal to anything in Louis Aragon’s Surrealist classic Le Paysan de Paris (1926) (8). The film is named not after any one character, or the escape attempt itself, but the hole(s) that act as magical thresholds between these worlds.

The “hole” also refers to certain narrative gaps that pock the film’s surface illusion of the visible. Most commentators on Becker’s work, Le Trou in particular, comment on his “control of temporality” (9); mention is usually made of his fondness for temps morts, scenes, as described by Philip Kemp, that “linger over… what goes on before, after and around the necessary plot moves” (10).

Time works in Le trou in ways more complex than is sometimes acknowledged, dividing the film into two distinct parts. In the first half, Becker insists on “real time”, recording acts with the integrity they would have in “life”; only once does he use dissolves to elide the often monotonous display of male work. After the first, reconnoitring trip, however, there is a change. The men have no access to a watch on the first visit, and time, as we usually experience it on film, seems to be suspended, causing the men to almost miss their wake-up call. Roland insists on proper time-keeping, and an egg-timer is duly manufactured. Now that time can be measured, the film’s tempo accelerates. Editing within scenes becomes much more apparent; actions that had previously been shown in their entirety are briskly synopsised. This might seem a nit-picking statement of the obvious: the film is clearly building narrative momentum towards its climax. Perhaps. But having given us, in conventional film terms, almost an excess of information, we now find that we are being deprived of it. This accustoms us to being withheld information and prepares the way for Le Trou’s inevitable betrayal.

Although he is not the film’s main character, Le Trou often adopts the point of view of the cell’s most recent occupant, Claude Gaspard (Marc Michel). This is a conventional enough device – the narrative world is introduced through a figure to whom it is as new as it is to the audience. But Gaspard never becomes “fully integrated” into the group (11): his soft-spoken, freshed-faced beauty jars with the experienced, world-weary “homoerotic[ism]” (12) of his cellmates (an illusion enhanced, in retrospect, by the actor’s subsequent, iconic performances as Roland Cassard in Jacques Demy’s Lola [1961] and Les parapluies de Cherbourg [1964], films not always celebrated for their gritty realism) (13). He is the only character given a conventional socio-psychological background; the first thing we learn of his past is that he has already betrayed, in this case his wife with her sister. Most importantly, he is the only character who is never shown actively engaging in work, the mark of the others’ integrity (14); in describing his previous life, he is shown to be negatively work-shy, alienating him not only from his fellow prisoners, but the officials who must go through similarly tedious routines. Gaspard is made privy to more narrative information than any other character, so when the film starts withholding it, we – and the escapees – are right to become suspicious.

The final important hole in the film is the peephole that acts as warders’ surveillance of the prisoners, a metonym for the panoptic system that operates throughout the prison, and as described in Foucault’s Surveiller et punir/Discipline and Punish (first published in 1975): the governor’s interrogation of prisoners; the guards’ invasive mauling of food parcels; the strict monitoring of the prisoners’ daily timetable and whereabouts (15). Brilliantly, the group turn this spying back on the spies, constructing a periscope out of a fragment of mirror, toothbrush and twine, allowing them to observe their guards’ every movement. This, incidentally, is an aspect of Becker’s filmmaking that might explain Jean-Luc Godard’s enthusiasm for it: this periscope is the film’s first break with its surface naturalism, breaking the visual field and scale, as the outside of the cell is seen in miniature and distorted, preparing for later, meta-cinematic optical effects, such as Manu and Roland walking down an underground corridor, the lights from their candles receding into the distance, reminiscent of the movement of a zoom lens. In his last work – Le Trou was completed days before he died – Becker used a film about “real people” to allegorise the cinema itself, and the portal it offers between stifling routine and true escape.