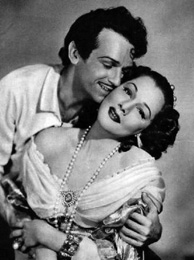 From its opening trumpet voluntaries to its flashing swordfight up the staircase of a derelict windmill, The Exile seems unlike any previous Max Ophuls film (1). In a departure from his stories centered in either the romantic fin de siècle period or the modern dress era, Ophuls’ first Hollywood feature cast back almost three centuries to 1660, in a pre-republican Europe that divides those of high birth from those of low birth. The rarest and least revived of his four Hollywood productions (2), The Exile unfolds in straightforward chronology, sans narration or flashbacks, and not presented through a heroine’s eyes.

One could, on the other hand, equally argue the opposite: that Ophuls’ 15th feature works as an exemplary illustration of all his thematic concerns, including the poetic traps of love and the imperatives of the social order that overpower it, as well as stylistic concerns such as the recurring patterns and techniques associated with circularity and artifice. The Exile also marked Ophuls’ first opportunity to employ Hollywood’s advanced technology toward the evolving sophistication of what Philip Lopate calls his “unfolding-scroll aesthetic”, shared by Murnau, Mizoguchi and Renoir, a style that “favored flowing tracking shots and pans, wide angles and continuous takes, that followed characters up staircases and from room to room, capturing with rich detail their surroundings” (3).

The tale at hand opens in The Hague, where Charles II, the English monarch deposed by Oliver Cromwell, waits with a band of faithful cavaliers in impoverished quarters for an uprising to overthrow the English Commonwealth. Eluding assassination attempts by Cromwell’s Roundheads, he takes refuge at a Dutch inn and tulip orchard run by the humble Katie. His womanising past catches up with him in the person of “the Countess” (Maria Montez), a well-connected courtesan who tempts him with gifts from Louis XIV, just as a stern Roundhead enforcer locates him for a final confrontation.

While the film’s second half is enlivened by compelling chases through the landscape of the Low Countries, and the final pageantry of triumphal restoration, the love story begins as the disguised monarch makes his way through an open market, bartering valuables to buy food for his ragged supporters, but unable to resist initiating a relationship with a blonde tulip seller. The awakening and progress of their love, until duty demands its renunciation, marks the true subject of the film, one which Ophuls presents movingly, wholly sidestepping clichés.

As producer, screenwriter and star, Douglas Fairbanks Jr. stamps the entire production as his own (although with modesty his name appears only at the very bottom of the acting credits). Determined to produce his own films, the famously Anglophile Fairbanks turned to British history, and scripted this fanciful romance, which James Agee called a “trumped-up anecdote [with] a charming, blank-verse hauteur” (4). Though the script was signed by Fairbanks, other period film specialists gave uncredited assistance, including Aeneas MacKenzie (Juarez, William Dieterle, 1939) and Clemence Dane (Fire Over England, William K. Howard, 1937), justifying an “A” budget for this romantic swashbuckler (though not the extra funds to film in Technicolor).

Upon the recommendation of Universal workhorse director Robert Siodmak, Fairbanks hired Ophuls to direct, perhaps because the European was himself an exile, having fled his native Germany the day after the Reichstag fire in 1933. The most cosmopolitan of directors, Ophuls straddled both German and French cultures, eventually making films in five languages: Dutch, Italian, French, German and English. From his internationalist historical perspective, the Cromwell government conceivably resembled France’s illegitimate wartime Vichy regime, while the 17th century Roundheads lived their ideology like the Nazi zealots who sent Ophuls and his family packing.

From its wintertime premiere in Boston, The Exile proved popular but soon got crowded out by rival costume spectacles in Technicolor, such as Forever Amber (Otto Preminger, 1947) and Captain from Castile (Henry King, 1947). But contemporary critics at best regarded Ophuls’ four Hollywood productions as mildly successful genre exercises devoid of Freudian psychology, innocent of Christian guilt, and insistently continental. Perhaps the disappointing reception came from the film’s delaying its emotional peak until midpoint, when the wind ripples across the tulips as Katie runs to find Charles, whom she had dismissed, and discovers him in the stables. At that moment of greatest intensity, their first gesture of intimacy, Frank Skinner’s elegiac love theme rises for the first time and our participation is emphasised by the visual interruption of a shutter that swings wildly (yet musically) to momentarily deny our view of their embrace. Finally, it closes the lovers off in privacy as we remain outside in the wind and elements.

Ophuls’ tender and generous women inevitably suffer, as the free-spirited and open-hearted Katie apprehends that her low birth demands she sacrifice her own happiness to the body politic’s, regretfully admitting the value of “all the things you’ll be able to do for so many people, all the wounds you can heal”. To the snow-white purity of Katie – Agee rightly called Paule Croset’s performance “as clear as a brook” (5) – Ophuls opposes the Countess, a surprise visitor from Charles’ libertine past – though her role has been whittled down to the point that Montez’s top billing seems compromised (6).

Circles figure again and again, the film continually returning to its starting point. Charles once reigned in England and becomes king again at the conclusion, at which point the cavaliers’ garrison seen at the opening reappears, now blossom-bedecked. Most strikingly, the Countess takes leave three times yet keeps returning, successively establishing that the past is past, then affirming Charles’ present love to Katie, and so finally freeing herself to proceed onto the future.

In the market scene, currency and goods also circulate, another longstanding Ophuls concern, as Charles barters valuables for wine, then food, then returns to take the wine, but finally gives it back (while distributing his small change to street urchins). Later, the camera itself assumes the viewpoint of Charles’ nemesis, the torch-bearing Colonel Ingram, and proceeds to inscribe a 360-degree pan to scan the horizon for the fugitive king.

Life, for Ophuls’ characters, requires the enactment of various levels of artifice and illusion. Thus, Charles pretends to buy roses, then purports to be a Cromwell sympathiser, and later impersonates a simple fisherman. While the king masquerades as a commoner, a fatuously posturing actor masquerades as the king (but must cravenly admit the fraud). When the Countess first appears, she wears a black mask, and even Katie conceals her jealousy by feigning dissatisfaction with Charles’ work. Only the blunt, humourless Roundheads seem to stick to literal truth, and are perhaps more dangerous because of it.

It is fitting that all these performances play out in the highly theatrical settings devised by the celebrated Broadway designer Howard Bay. Rejecting the trickery of process screens and glass shots, he provided vast operatic spaces across Universal’s largest, 50-foot high soundstage, encompassing pastoral tulip fields, a two-storey inn, and a stylised market square (its clock looks suspended in mid-air) (7).

For Ophuls, as for his Lola Montès, “life is movement”, so he fills these expanses with details of staging and comic opera business, moving actors in parallel or counterpoint to the camera. Coupled with his famous tracking shots, players and camera move in dynamic relation, giving shape and volume to the theatrical spaces. Raymond Durgnat’s description of the style cannot be improved: “His camera moves past screens, flunkeys, fans, candles, whispered conversations, much as a Henry James sentence winds its way through innumerable reservations, concessions and hesitations to its final rather tentative assertion.” (8) As cinema’s reigning exponent of the travelling shot, Ophuls stood in a proud lineage (Vincente Minnelli, for one, termed him “my spiritual leader”), but studio heads opposed long take sequences by Jean Renoir and Alfred Hitchcock because the style rendered them powerless to intervene in post-production, and it also refused to fit into their accounting systems for daily footage.

The Ophuls style is nothing if not linear, so critics have attempted to fix a definitive meaning on the camera movements, suggesting that motion equals emotion, or embodies a continuum of the moment that time passes, or perhaps the consciousness that the film has of itself. But Ophuls’ hand is slippery, sometimes pushing his lens for sheer playful exhilaration or to keep the story on a human scale. The traversal of space evokes a distinctively airy quality, an amplitude akin to the billowing of curtains, uniquely satisfying compared to the dislocations and joins of conventional editing, no matter how seamless. As François Truffaut noted, Ophuls’ camera sweeps the screen in tempo: “Rhythm was his predominant preoccupation – the rhythm of a film, of a novel, the novelty of someone’s walk, of a performer’s acting, the rhythm of a life…. He dreamed pauses, stops, rests.” (9)

Yet in The Exile, the director plays all the instruments in his orchestra. There are compositions in depth as well as eloquent long shots; a penetrating flurry of shot/reverse shot editing in Charles’ first brush with the ice-cold Ingram; sensuous Sternbergian surface textures as watery reflections shimmer across the lovers’ faces (10); and inspired acting when a clearly shaken Charles can barely speak after dispatching the villain, marking an emotional turning point that even the invitation to reclaim his throne can barely penetrate. The next morning he announces to his chancellor his plan to abdicate for love, but he cannot reconcile the conflict between his romantic and historical destiny. His chancellor tells him, “You belong to your people, not yourself. You are their memory, their hope, their flag.” He goes to her room, and the door once more swings shut on their embrace. As Tag Gallagher describes it, “for a moment he seems ready to trade his crown for Katie… [but] he sits on the bed and says, ‘What will become of you?!’, and we know she knows he has abandoned her, and she comforts him as though he is losing more than she.” (11) When Charles asks this question, Ophuls reveals his mastery of gesture in twin tableaux: with plaintive tenderness Katie lifts her hand to touch his dark hair as their love theme swells and, following a cutaway, she hides her face on his chest as he says, “I’ll come to you in dreams”.

As so often in Ophuls’ films, exuberance and festivity in the social realm mask personal renunciation and loss. As the king moves through a door in the far background, now a tiny figure accepting the popular acclaim, we become aware that his exit is actually an entrance onto the stage of power and history, while we are left to realise, with Katie, that we have been backstage all along (12).