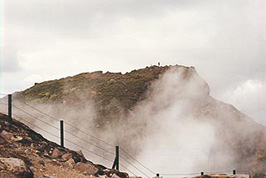 Apocalyptic scenarios have featured extensively in the inimitable work of New German Cinema luminary Werner Herzog. Tellingly, they fall into two categories that coincide with the (broad) distinction that has structured his oeuvre – that between fiction films and documentaries (although in practice the line between these modes of filmmaking is often blurred, if not obliterated).

On the one hand, there are those films such as Lebenszeichen (Signs of Life, 1968), Aguirre, der Zorn Gottes (Aguirre, The Wrath of God, 1972), Woyzeck (1977) and Cobra Verde (1987) that detail a personal apocalypse. They often feature Joseph Conrad-type lone visionaries venturing into the unknown and ultimately finding their own precarious existences collapsing in on themselves, leaving these characters staring into the indifferent abyss of the world that mocks and engulfs them. On the other hand, however, is a clutch of ostensible documentaries in which the aura of science fiction – of the earth as alien other – is used to pass comment on the end of the world as we know it.

The recent, extraordinary The Wild Blue Yonder (2005) – winner of last year’s International Critics Prize at the Venice Film Festival – completed a triptych also comprising Fata Morgana (1970) and the post-Gulf War Lessons of Darkness (1992). In these works, scenes depict our world burned and scarred beyond recognition, raped and pillaged by the hand of man and left to rot and to burn – merely “A planet in our solar system” as Lessons of Darkness’ narrator intones. This approach reaches its zenith in The Wild Blue Yonder, in which an alien (played by Brad Dourif) narrates to camera the story of his race’s failed colonisation of the earth and the subsequent attempt by humans to colonise his home planet. Here, explorers leave earth to its impending doom, returning over 800 years later to find our planet in a new Edenic, pre-human state of bliss.

La Soufrière should be placed within this later category, another report on imminent doom – its full title is actually La Soufrière: waiting for an unavoidable catastrophe. Indeed, in this regard, Herzog’s venture onto the island of Guadeloupe, amid all the signs of an impending volcanic eruption that had sent most of the population into mass evacuation, echoes aspects of the sci-fi story that eventually became Fata Morgana. Fata Morgana was originally intended to focus on aliens from Andromeda who make a film about a world waiting for a catastrophe that will end its existence (a story echoed in The Wild Blue Yonder). Humans ultimately discover the film and from it produce an investigative report akin to what Herzog terms “A very first awakening” (1).

What, then, particularly interests Herzog is the notion of people and places pushed to extremes: that it is by this route that we can discover something more essentially truthful about ourselves and the world around us. And it is this fundamental, what he calls “poetic, ecstatic truth” (2), that Herzog has always searched for. The film scholar and critic Mark Cousins has said that, after John Ford, Herzog is the most important landscape director in cinema history (3); whilst Herzog himself is fond of saying that we, as a race, only have embarrassed images of the world (that is, worn out and corrupted by picture postcard clichés), and that we need to find new images with which to define ourselves. If not, he warns, we will perish like the dinosaurs.

This “ecstatic truth” is what is immediately so striking about La Soufrière. The island could have been born from a science-fiction fantasy. Deprived of its humanity it mechanically repeats itself – traffic lights blinking, television sets still on – in the face of annihilation. There is a marked contrast here between the wild, uncontrollable natural world and the city, and civilisation, at its mercy. Herzog seems to suggest that the landscape marked by man is compromised to the extent that it is left to meaninglessly play out its allotted role/function while animals reclaim the streets in a futile attempt at survival.

The notion of the corrupted landscape feeds into the aforementioned search for deeper truth, and informs Herzog’s thematic as well as visual preoccupation with circularity. From the windmills of Signs of Life to the out-of-control vans in Even Dwarfs Started Small (1970) and Stroszek (1976), and the circling camera in the famous final shot of Aguirre, The Wrath of God, overt images of circularity haunt Herzog’s oeuvre. Less obviously, many of his films are circular in structure; think of Nosferatu reborn as Harker in Nosferatu: Phantom der Nacht (1979), the fires being reignited at the close of Lessons of Darkness, or the earth ultimately reborn in The Wild Blue Yonder. And it this later example that provides the key, something that is hinted at in the emblematic title of Herzog’s 2003 documentary on Tibetan Buddhist religion and ritual – Wheel of Time. Now that we have no adequate images left and have corrupted our world, an experience of death and rebirth is required, a purging of the world for which the island of Guadeloupe is a perfect microcosm.

Herzog’s use of music should also be noted here. The soundtracks, for both his fiction films and documentaries, have generally been eclectic, with the music adding entirely new levels of meaning. In his discursive work, he has generally favoured classical music – either alone (Lessons of Darkness features Wagner, Schubert and Mahler among others; Wings of Hope [1997] has Wagner and Stravinsky; Echoes from a Somber Empire [1990] has Prokofiev and Shostakovich among others) or in juxtaposition with indigenous or popular music (Fata Morgana features both Mozart and Leonard Cohen; Little Dieter Needs to Fly [1997] mixes Bartok, Bach and Glenn Miller). In La Soufrière, the romantic strains of the second movement of Rachmaninov’s Piano Concerto No. 2 (the first movement of which had been popularised as the recurring theme in David Lean’s Brief Encounter [1945]), seems to less support the early scenes of Herzog touring the deserted island than offer an ironic commentary. As William Van Wert has noted, the music is an empty swell and an insult (4), by which, I believe, he means its grandiloquence finds little if anything of commensurate stature in the imagery. It scoffs at Herzog’s romantic, individual quest to document the island’s destruction; it also, like Luc Besson’s Atlantis (1992) becomes an exercise in how music can alter the affect of filmic images, as it effectively contrasts with the disquieting silence of the deserted civilisation seen earlier.

La Soufrière emerges today as typical Herzog. It was one of the works, along with Fitzcarraldo (1982) and its “making of”, Les Blank’s Burden of Dreams (1982), that promulgated the myth of the director as a megalomaniac, a risk-addicted madman willing to push himself, and anyone unfortunate enough to get involved with him, to ridiculous extremes for his art. Indeed, as remarked on above, the film ultimately mocks this aspect of Herzog’s legend, with the director who once proclaimed he would command the jungle left scrabbling around on a hillside to try and avoid toxic fumes whilst his cameraman loses his glasses. It is an essay on the director-as-god (witness, as in Lessons of Darkness, the floating aerial perspective shots) pitting his wits against and trying to second-guess nature. In this sense, La Soufrière may be more than simply typical of its filmmaker; it may be a key to understanding, to putting in perspective, his most singular body of work.