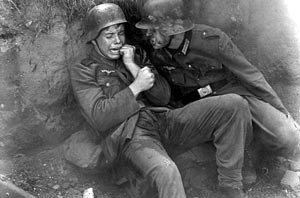 The Austrian director Bernhard Wicki’s feature-film debut, The Bridge is a riveting drama that tells a relatively simple yet poignant story of a group of seven German schoolboys who, conscripted into the German army during the desperate final days of World War II, are assigned to defend the titular structure as the Allied army advances towards their village. Released in the United States on 1 May 1961, to critical and popular acclaim, the film offers an obvious reiteration of the war-is-hell theme, but does so with compelling visual imagery and legitimate emotional resonance (1). The film is often hailed as a landmark anti-war film, though its message is more nuanced and complex and its position on war more ambiguous than this routine characterisation would suggest.

The futility of the boys’ service is clear to the audience at the start of the film. Set in a Bavarian village in late April 1945, when the inevitability of German defeat is obvious even to most Germans, the film makes its audience keenly aware that whatever else might occur, the boys are being drawn into a doomed war effort in its final throes. In the provincial villages, however, nationalism and idealism persist in the face of likely defeat, and the village schoolboys, eager to serve, consider their conscription an honourable opportunity, their defence of the assigned bridge a most noble and crucial cause. Unbeknownst to the boys, however, the German army plans to blow up the bridge as American tanks are crossing it, and so, when a trio of American tanks arrives – preceded by a strafing fighter-plane that kills the first of the boys – the boys dutifully begin a firefight, during which additional deaths and injuries occur amidst escalating fear and confusion. Eventually the surviving boys fire upon three fellow German soldiers, who have arrived to blow up the bridge, killing one and driving off the other two, one of whom fires back and kills the penultimate schoolboy survivor, Hans (Folker Bohnet). The last of the schoolboys, Albert (Fritz Wepper), is, at the film’s close, physically and emotionally wounded by the debacle but ostensibly survives to tell the story. As he walks away from the site, the camera pans from above, showing the bodies, weapons and debris scattered across the intact bridge.

In vivid, stark detail enhanced by its black-and-white cinematography, the film captures chaos amidst the desperately adhered to codes and conventions, structures that create an illusory sense of order and predictability. Bernhard Wicki himself noted, in a 1959 interview with Hans Ulrich Reichert of Tagesschau (Daily News), that he made the film not as a pro- or anti-war statement but rather as a statement against “Unsinn des Krieges überhaupt” (the nonsense of war as such) (2). Certainly the film compels its audience to question the necessity and utility of various methods and strategies deployed during wartime and, more importantly, the cultural and ideological attitudes and conditions that make such activities seem necessary and even noble. The Bridge vividly illustrates “unsinn” in all its tragic pathos. The film’s tragedy arises from not only the boys’ naiveté and youth, but also the futility of their military service in the face of imminent defeat; it is as much a study of the cost in human suffering resulting from foolish and desperate measures imposed upon the innocent as it is a stark indictment of the tragically hubristic mandates handed down by authorities in times of war, especially those who, out of fear or denial, are unwilling to concede and who thus compel others to make the sacrifices necessary to delay inevitable defeat.

The war situations depicted in The Bridge thus expose the abuses of authority that make such tragedy possible: not only the government and military but also, and far more damning, the parents, teachers and community that instill and exploit a naive, and easily manipulated, idealism in the young. The boys’ parents not only allow but also encourage such reckless sacrifice, in the name of a nationalist cause in which they themselves fervently believe – but for which they aren’t the cannon fodder. Their misguided, and unwittingly selfish, choices are vividly dramatised as the boys vicariously pay the price for their parents’ own desires. The boys are victims not of a nebulous evil entity called “war”, but of their families’ and communities’ ignorant and misguided beliefs.

Wicki’s first directorial effort was Why are they Against Us?/Warum sind sie gegen uns (1958), a documentary about German youth and their social and economic problems. The Bridge debuted the following year, after several more prominent directors had declined the project. Noted for the harrowing, realistic performances that he elicited from his amateur actors in The Bridge, Wicki went on to direct other well-received films, including the German segment of the Hollywood war film The Longest Day (1962, also co-directed by Ken Annakin and Andrew Marton) and what is arguably his best work, Spider’s Web (Das Spinnennetz, 1989), the story of a German naval officer’s machinations. The Bridge’s influence upon subsequent war films is oft noted, especially by viewers who see in Steven Spielberg’s Saving Private Ryan (1998) an extension of the stark brutality and wasted courage exhibited by Wicki’s film’s young soldiers. Notwithstanding The Bridge’s improbable and ridiculous tagline, “They look for love in a world of violence!”, and its marketing posters exhibiting the back view of a woman in lingerie (culled from the initial sequence of character sketches, and showing an intimate affair observed voyeuristically by Karl [Karl Horber], whose lusted-after object of affection is to his surprise his father’s mistress), audiences have admired the film’s stark realism and the engaging, if painful, truths it offers (3).

The film closes with a caption, onscreen just prior to the closing credits, about the event’s historical relevance: “This happened on April 27, 1945. It was so unimportant that it was not mentioned in any war communiqué.” Reiterating by way of a generic based-on-a-true-story wrap up, this caption, one imagines, is designed to impress those viewers who privilege the smaller truths of ostensible history over the larger Truth of timeless themes and enduring questions. The caption thus disingenuously accounts for the event’s absence in recorded history (while “recording” it) with a coyness that is inconsistent with both the film’s stark and palpable visual immediacy and its haunting, understated sense of genuine pathos.