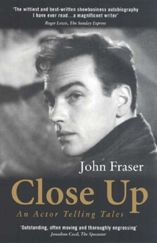 A quite ridiculously handsome leading man in British films of the 50s and 60s, John Fraser worked at the top of his profession without ever quite becoming a great star. You may recall him as Lord Alfred Douglas, the petulant toyboy in the least awful of the Wilde biopics The Trials of Oscar Wilde (Irving Allen and Ken Hughes, 1960) or as Catherine Deneuve’s ill-fated suitor, who takes a very long bath at the end of Roman Polanski’s Repulsion (1965). Or then again, you may not.

When it comes to writing memoirs, John Fraser’s not-quite-star status gives him an advantage that most top-of-the-line celebrities wholly lack. Unlike his contemporary Dirk Bogarde (who wrote five volumes of autobiography without actually telling us a thing), Fraser has no particular image to keep up, no vast army of fans to be placated. He is therefore free to tell the truth; naturally, the truth as he sees it – and bound always by old-fashioned codes of legality and good taste – but still truth of a sort. If you really want to know what it was like to be an international film actor around the middle of the 20th century, Close Up is probably the book to read.

A leading actor but not a star. A working-class boy from Glasgow who specialised in playing upper-crust English gents. A dashing sex symbol who was quietly but unapologetically gay. Fraser is that most privileged and detached of observers – an “outside” insider. A decade before the Free Cinema of the 60s turned “working class” into a fashion statement, Fraser’s background was ironed out of him by elocution lessons and officer training. Did his relative openness about his sexuality hurt his career? A fruitless question and one he does not try to answer. How can Fraser – or anybody else for that matter – guess at the importance of films he did not make?

We do learn that the “casting couch” was just as perilous for young actors as it was for female starlets. Early in his career, Fraser is taken up by gay producer James Woolf, whose patronage thrust Laurence Harvey to stardom in Room at the Top (Jack Clayton, 1959). (He writes: “Larry’s whoredom was so blatant it was disarming.” [p. 157]) Unwilling to trade his body for movie roles, Fraser does not sleep with Woolf, who does not get him the lead in Lawrence of Arabia (David Lean, 1962). A few chapters later, Fraser spends a weekend in Paris with bisexual Tony Richardson, his prospective director on the film of Look Back in Anger (1958). All to no avail, as Fraser is soon dumped in favour of the wildly heterosexual (and recognisably working-class) Richard Burton.

In private, the film industry runs on the giving or withholding of sexual favours; in public, it maintains a coldly puritanical face. Although Fraser manages to live quietly with his long-term lover in Hampstead, his passionate fling with Rudolf Nureyev is cut short – not by the ballet star’s legendary promiscuity or volatile temper, but by the warnings of a jittery agent: “If you don’t stop this madness instantly, your career will be over!” (p. 197) Fraser obligingly breaks it off, only to observe – at close quarters – the misery of a star actor living inside the Celluloid Closet. Dirk Bogarde, trapped in a sexless ménage with his manager and ex-lover Tony Forwood, pleasures himself on a motorcycle – gazing all the while at his own image, immortalised in black leather, as a gay Mexican bandit in The Singer Not the Song (Roy Ward Baker, 1961).

Not that the heterosexual stars of Hollywood emerge as any more well-adjusted than the closet gays. In an episode straight out of Sunset Blvd. (Billy Wilder, 1950), Fraser is cast as the young love interest to an ageing Hedy Lamarr in a barely-released vanity project called L’Amante di Paride (Marc Allégret and Edgar G. Ulmer, 1954) (1). He finds her incapable of any human interaction, talking only in a sustained rambling monologue, but reflects with insight on the psychological traumas that had made her such a mess.

Worshipped for her beauty and a scientific genius as well […] She had been thrust into the limelight at a pitilessly early age, been devoured by rapacious lovers and producers who saw her ravishing beauty as a ticket to success. (pp. 106-107)

He can find no such excuses for Bette Davis, a foul-mouthed termagant who – in Fraser’s inimitable turn of phrase – “makes Hitler look like Cliff Richard.” (p. 214)

Directors, in this glamorously unhinged world, seem less like the auteurs that film buffs love to imagine, more like wardens struggling to keep order in a Home for the Criminally Insane. Edgar G. Ulmer, who directs the Lamarr film, seeks only to survive the experience: “I am zee Director of ziss Fucking Rubbish, unt you vill do vot I say!” (p. 106) Anthony Mann, director of El Cid (1961), has “a flair for the operatic which amounted to genius” (p. 181) but holds sway over his Spanish location with a brutality and foul language that appal the gentle and genteel Fraser. He shows a cordial dislike of his most famous auteur, the diminutive Roman Polanski (“Too near the ground to be sanitary” [p. 199]) and dismisses his script for Repulsion as “sick”. Still, he credits Polanski as “the best director of actors I have worked with.” (p. 199)

As the Sixties swung shut, Fraser grew bored with cinema. He went away – first to Rome, to write a novel, then to tour the world as director of the peripatetic London Shakespeare Group. He lives now in retired splendour in Tuscany, with his partner of 28 years. If he misses the film world at all, he does not give any indication in this book. He emerges in Close Up as a witty, honest and thoroughly likeable man who had a brush with near-stardom but survived with his sanity intact. John Fraser may never be a great name in world cinema, but his dazzling memoirs eclipse those of many a bigger and brighter star.