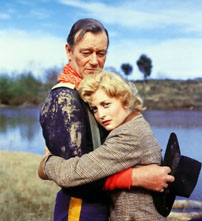 The ideological divisions of the Civil War are examined in John Ford’s The Horse Soldiers (1959). The result in a very good film, but one that is like all middle-rung Ford: weak in that it moralises, by over-articulating the absurdity of this American-American conflict though verbal rhetoric.

The cinema of Ford is, like most great cinema, visual, and, when geography (be it of a landscape or of a room) becomes the focus of his cinema, the results are often brilliant. However when it becomes talky, it is flawed – except for The Man Who Shot Liberty Valance (1962), where the sometimes cowardly moralising of Ransom Stoddard (James Stewart) is looked on ambiguously by Ford, and is matched by Wayne’s stoical yet ultimately ineffectual Tom Doniphan.

During the Civil War, Union generals order a specially selected brigade under Colonel John Marlowe (John Wayne) into confederate territory to wreck havoc on their defences. Accompanying him is a doctor, Major Henry Kendall (William Holden), whose ideas of fair play in war do not mesh well with the Colonel’s.

What we witness throughout are the effects of war on the South and, at his best, Ford does not stress effect as a moralist. Instead, as his characters pass over the land, the universality of the human condition is explored though parallel images of men separated by the boundaries of land, the battlefield and by little more then the colour of their tunic.

To illustrate, the film’s four key scenes that sum up this theme involve parallel images showing division, but also the mirror image of men or gathered forces.

The first involves Union soldiers waiting by a river. A Confederate patrol passes by, and the Union marauders stay hidden and quiet. The scene takes place from the Union perspective. In long-shot, a Confederate patrol is seen passing on the other side of the river. Ford alternates with medium-shots of the Union soldiers witnessing this act. The Confederate soldiers are singing proudly and defiantly. Ford communicates the universality of the human condition in relation to the way men express their pride in duty. The reflection of the patrol against the river is a reminder of the similar group of Union soldiers across the divide (physical and also metaphorical for the conflict). Through his poetics, Ford visualizes the divisions of the war and shows the universality of human patriotism.

The second scene involves a counter-attack from a group of wounded Confederate soldiers in a captured town. It is a more visceral scene, where the camera dynamically tracks the advancing soldiers. Again Ford uses a shot-counter-shot of confederate soldiers and union soldiers to stress the similarities between the actions of both groups, and, although of a smaller scale, recalls the central battle scene in D. W. Griffith’s The Birth of a Nation (1915). Ford begins the scene with the Confederate soldiers in romantic defiance and then introduces a more forlorn tone as the scene progresses. Throughout the scene, Ford manages to stay ambiguous towards the actions of both sides. The scene is also one of the few where the moralising of Major Kendall comes off successfully. The screenplay has established him as a friend of the local commander of the garrison and his outwardly displayed feelings mesh well with the scene.

The third scene is the most memorable and draws from the past two to find another theme: the youthful adventurism that masks war, and, like the rest of the film, an idea that Ford looks on with ambiguity. In order to hold off the advance of the Union marauders, a young officer’s school is ordered to halt the advance, cross-cutting between the marching of the boys as they valiantly enter into the man’s world of war. This lyrical aside leads up to the confrontation, which Ford approaches almost comically, the universality of both sides: the Union soldiers won’t fight the children. That Ford can manage to make the projected outcome both horrific and funny in its scope is his art summed up beautifully. This is Ford the humanist at his height; it is at once stirring and unsettling, and is one of the great scenes in his canon.

The final scene is one of defiant individual action, crossing and destroying a bridge, the geographical and metaphorical divide that separates both sides of this conflict. Triumphantly in the act of service, Colonel Marlowe rides his horse as the bridge explodes, an image of rowdy American heroism, and is once exhilarating in its visceral impact yet something remains unsettled. The following images involve Kendall and Miss Hannah Hunter (Constance Towers) on the other side of the river treating the wounded. What Ford expresses here is neither dread nor joy, but an ambiguous look at man’s sad acceptance of his duty.

Ford’s acceptance of the irresolvable was evident in earlier films like They Were Expendable (1945), My Darling Clementine (1946) and Fort Apache (1948). However, Ford’s own view of society and his characters abilities and beliefs in performing their established duties would become more ambiguous in his later films. Two Rode Together (1961), The Man Who Shot Liberty Valance and 7 Women (1966) are bleak in their character’s untimely acceptance of their historical duties as mythological pawns in the creation of a distinct identity (national in the case of the first two, and sexual and intellectual in the case of the later.)