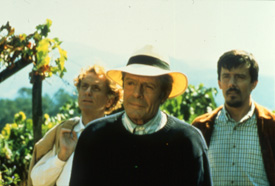 Viagem ao Princípio do Mundo (Voyage to the Beginning of the World) is a typically luminous and cerebral film from director Manoel de Oliveira, whose career actually seems to have picked up speed as he entered his 90s; he was 89 when he directed this film. It is also Marcello Mastroianni’s 171st film, and his last. Mastroianni knew that he was ill with cancer when he began shooting the film, although his infirmity isn’t readily apparent; by the end of the shoot, it was clear that the project would be his final screen appearance. Oliveira dedicated the finished film to Mastroianni, who died shortly before its release. Constructed in long, fluid takes, which alternate between stunningly atmospheric static set-ups, and languid dollies that follow the protagonists on their journey, Viagem ao Princípio do Mundo is photographed by Renato Berta in a clear, almost hallucinatory style, beginning in a world of summer foliage drenched with sun, yet moving inexorably towards a dark, almost medieval feel in the film’s penultimate scenes.

The plot, as in most Oliveira films, is deceptively simple. An aging director named Manoel (Mastroianni, an obvious stand-in for the director) accompanies three actor friends on a long car trip through Portugal, so that Afonso (Jean-Yves Gautier) can meet his aunt Maria (Isabel de Castro), whom he has never seen. Also along for the ride are the sardonic Marxist Duarte (Diogo Dória), and the impressionable Judite (Leonor Silveira), who engage Manoel in a dialogue about age, memory, and the passing of youth. Manoel feels that life has passed him by, and lives for the most part in the past, telling Judite “you tolerate me the way the old tolerate the young”. As one external sign of his mortality, Manoel leans heavily on a cane when the group leaves the car to view one of the locales of his youth, but at the same time, Manoel is still lively and flirtatious, in a weary fashion as befits his age and declining health.

After a series of stops at a Jesuit school where the young Manoel received his early education (significantly, the group are unable to see the school at close range, but must be content to view it through a pair of binoculars from the other side of a river), and a ruined hotel where Manoel recalls a romantic interlude, the party arrive at Maria’s home in a primitive section of the country, in a little town named Alto de Teso. Modern conveniences have no place here; indeed, Maria feels that television (the quartet’s chosen medium) is “the devil’s work”. She is also deeply suspicious of Afonso’s motives in visiting her at this late date, particularly since the family has just inherited some property. Most disturbing, however, is the fact that Afonso does not speak Portuguese. Raised by his mother and father in France, he has no knowledge of the language, and others, including a young woman named Christina (Cécile Sanz de Alba) who happen to be visiting, must translate Afonso’s French for Maria, much to her disgust.

At length, Afonso convinces Maria of his sincerity, and the group visit the family gravesite, where Afonso and Maria have a tender moment of reconciliation, and Afonso comes to terms with his past, and Maria with her own memories of Afonso’s father, also named Manoel, who left the desolate village at the age of 14 to seek a new life elsewhere. Maria has never been able to forgive her son for his desertion, but now, it seems, she has come to peace with the fact that there is a world outside Alto de Teso, even if it is a world that she does not comprehend or accept. For his part, Afonso returns to work with his colleagues with a renewed sense of his origins, and his place in the world.

To those who know his work well, Oliveira’s style should come as no surprise. The film unfolds in the most leisurely fashion imaginable, and at first glance, it might seem that the dialogue is almost passive in its acceptance of old age, regret and memory. But Oliveira’s ear is sharply attuned to nuances of speech, and each of his characters is an individual, with unique attributes, and an individual approach to the workings of destiny. The camera lingers on one speaker, and then another, although often Oliveira prefers to let much of the dialogue happen off-screen, as his camera intensely scrutinises the face of the listener. Bracketing the sequences of Manoel’s past are long sections of the road disappearing behind the car in a seemingly endless ribbon of time, suggesting that the voyage the quartet are embarked upon is one from which it will be difficult to return. As the group nears its destination, wild dogs run amok in the road, all the more vicious for having mated with wolves in the nearby hills. Oliveira’s initial vision of the world as a kind, forgiving entity is gradually transformed into a landscape of primitive violence, in which the dreams of youth are crushed by the burdens of history, poverty and hopelessness.

The film’s most emblematic proof of this burden is the apocryphal figure of Pedro Macau, whose appearance as a statue brackets the beginning and end of the film. The statue of Pedro Macau carries the seemingly insupportable weight of a large beam on one shoulder, crying out for assistance, but no one comes to his aid. As one of the villagers says of his Sisyphean plight, “no one sets him free”, and then recites a folk poem that has come down through the centuries, recounting Pedro’s sad destiny.

My name is Pedro Macau,
with a beam on my back
Many pass by here,
some white-nosed, some black-nosed,
But none of them sets me free.

As the villager who teaches the four travelers the poem notes sardonically, the plight of Pedro Macau is proof of the sad fact that “life is what it is, and death never fails”, a sad and resigned commentary on the trajectory of human existence. In the film’s final moments, Oliveira reveals in a series of titles that “the story of Afonso is based on the life of Yves Afonso, who in 1987 worked on a French co-production shot in Portugal”. This final touch, suggesting that the film is more than a little autobiographical, is a fitting coda to a deeply passionate and carefully considered meditation on the vicissitudes of the human condition.

The film ends with Manoel hurrying his cast to a shooting session, with Afonso in costume as Pedro Macau, ready to carry on the burden of human existence. Life may be what it is, and death unfailing, but in the meantime, we must carry on the work of the living; a fitting epitaph for Mastroianni, who gives one of his most sympathetic and humane performances. For many, Viagem ao Princípio do Mundo is Oliviera’s masterpiece; it is certainly his best-known film. He has continued to direct with vigour well into his 90s, with such films as Inquietude (Anxiety, 1998), La Lettre (1999), Palavra e Utopia (Word and Utopia, 2000), O Princípio da Incerteza (The Uncertainty Principle, 2002), Um Filme Falado (A Talking Picture, 2003), and the recently completed Espelho Mágico (Magic Spell, 2005). As a friend of mine recently commented, at a time when most would be content to contemplate their past glories, Manoel de Oliveira seems unstoppable. For Oliviera, what we do in the present matters as much as what we have done in the past, as Viagem ao Princípio do Mundo so passionately demonstrates.