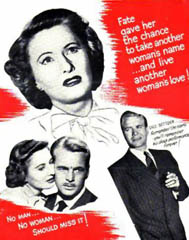 Cornell Woolrich, writes Francis Nevins, “was the Poe of the 20th century and the poet of its shadows, the Hitchcock of the written word” (1). While novels by Dashiell Hammett, James M. Cain and Raymond Chandler have remained in print since their publication more than 60 years ago, and are known by every aficionado of film noir, Woolrich’s novels and short stories have been out of print for most of this period. Yet Woolrich was, at least in the 1940s, a significant influence on developing those themes, characters and worldview that, retrospectively, was perceived as film noir. This was largely due to the fact that most of Woolrich’s post-1934 fiction obsessively dramatises a key noir question – why me? (2)

There is a sense of doom and personal impotence that pervades much of Woolrich’s fiction. While it is sometimes reductive to rely heavily on biographical details, there is ample evidence, thanks mainly to the efforts of Francis Nevins over the past 35 years, that Woolrich’s distinctive lifestyle was an important determinant in his work – particularly in the way he dramatised a sense of paranoia in different settings and time periods. Woolrich lived with his mother, Claire Attalie Tarler, in an apartment in the Hotel Marseilles in New York from the early 1930s until her death in 1957. Devoid of close personal friends, he did little except write, and from 1934 until 1948 published more than 200 stories, and from 1940 to 1948 eleven novels.

Woolrich’s influence on the Hollywood cinema of the 1940s was significant. Between the low budget Columbia film Convicted in 1938 and Paramount’s No Man of His Own in 1950, there were 15 films produced based on his fiction. There were also more than 20 radio plays based on his novels and short stories during this period.

Woolrich was born in New York in 1903 and after his parents separated in 1907 he remained with his father in Mexico until, as a teenager, he joined his mother in New York. This was a turbulent period in Mexican history and, as a hobby, Woolrich collected the spent rifle cartridges that littered the streets. Whether the violence associated with this period affected his fiction, and his view of the world, cannot be reasonably gauged but after his death the following fragment was found amongst his papers: “one night when I was eleven and, huddling over my knees, looked up at the low hanging stars of the Valley of Anahuac, and I knew I would surely die finally, or something worse.” This, he continues, marked the beginning of “the sense of personal, private doom” that pervaded his entire life: “I had that trapped feeling, like some sort of poor insect that you’ve put inside a downturned glass, and it tries to climb up the sides, and it can’t, and it can’t, and it can’t.” (3)

In 1921 Woolrich enrolled at Columbia University but he abandoned his studies after the success of his first novel Cover Charge (1926). When his second novel Children of the Ritz (1927) was purchased by First National Pictures, Woolrich, who always had a strong interest in the movies, went to Hollywood to work on its adaptation. He remained with First National as a staff writer for a few years although he never received a screen credit. During the late 1920s and early 1930s he continued to publish novels and short stories and in 1930 married Gloria Blackton, the daughter of pioneer film producer J. Stuart Blackton. The marriage, however, was never consummated and, after leaving his wife a diary detailing his homosexual affairs during their marriage, returned to his mother in New York.

In the early 1930s he abandoned mainstream fiction after he was unable to complete his seventh novel, I Love You, Paris. Desperate for money during the Depression, Woolrich turned to the pulp magazines and his first crime/suspense story, “Death Sits in the Dentist’s Chair”, was published in Detective Fiction Weekly in August 1934. This marked the beginning of an amazing transformation in his career and over the next 15 years he wrote for magazines such as Ace-High Fiction, All-American Fiction, Argosy, Baffling Detective Mysteries, Black Mask, Dime Detective, and The Shadow. Following the success of his first crime novel The Bride Wore Black in 1940, which was filmed by François Truffaut as La Mariée était en noir in 1968, he turned increasingly to the novel rather than the short story. However, he was so prolific that he was forced to write under the names of “William Irish” and “George Hopley”, as well as Cornell Woolrich, as his publisher, Simon & Schuster, could not handle all of his output.

His creative period (mostly) ended in 1948 and he only published a few new short stories and novels in the 1950s and 1960s, while also trying to rework earlier stories and pass them off as new. As William Irish he wrote Waltz Into Darkness in 1947, which was filmed in 1969 by Truffaut as La Siréne du Mississippi and by Michael Christofer in 2001 as Original Sin. In 1948 an even better novel appeared, I Married a Dead Man, the basis of No Man of Her Own. Along with 1950 version, it was also filmed in France in 1982 as I Married a Dead Man (aka I Married a Shadow), and was used as the basis for the 1996 Ricki Lake, Shirley MacLaine “comedy”, Mrs. Winterbourne.

The opening section of I Married a Dead Man is pure Woolrich, focusing on a “typical”, vulnerable, person trapped within a hostile universe with little hope of salvation. Although the specific nature of the “trap” varies from novel to novel, its function is always the same – to dramatise Woolrich’s paranoid view of existence whereupon the individual is shown to be impotent and unable to understand, let alone control, his or her world. Woolrich rarely drew upon the traditional mystery or detective story and never used serialised characters. He rejected the processes of ratiocination that underpinned the traditional detective story as he was not interested in the restoration of a social or moral equilibrium. Instead his work detailed its disintegration as he explored the absurdities and inequities of life. This often produced strange twists and unresolved endings and provoked criticism of his fiction as implausible and “unrealistic”. Woolrich did not care – he was only interested in generating a sense of despair and emotional chaos. Nowhere is this more evident than in the conclusion of I Married a Dead Man, where he refuses to resolve the dilemma facing the two main characters. Unlike the film, the identity of who killed Helen’s husband is not revealed and the novel ends with Helen’s quiet cry: “We’ve lost. That’s all I know. We’ve lost. And now the game is through.” He viewed the world as an arbitrary and incomprehensible place, where, as Francis Nevins points out, “beams happen to fall, and are predestined to fall, and are toppled over by malevolent powers; a world ruled by chance, fate and God the malign thug” (4).

The noir credentials of No Man of Her Own are established by Helen Ferguson’s (Barbara Stanwyck) voiceover at the start of the film. This narration borrows heavily from the final passage in the novel which brilliantly juxtaposes specific details of her seemingly secure lifestyle within the Harkness family against her despairing sense that all is lost:

This sense of desperation is accompanied by a mobile camera tracking across a quiet street in the early evening and through the front door of a large suburban house. Helen’s narration continues as the camera prowls the interior of the house to finally rest on Helen and Bill Harkness (John Lund) in the living room:

I know just as surely that someday he will pack his things and leave, although he won’t want to. And even if he does not leave, I know that it will be I that will walk out and never come back. We’ve fought this thing, how desperately we’ve fought it. We’ve driven it away a thousand times and it comes back again, in a look, in a thought.

The film is recounted via a long flashback beginning with Helen, pregnant and alone in New York, phoning the father of her unborn child, Stephen Morley (Lyle Bettger). When he refuses to see her she accepts the one-way train ticket from New York to San Francisco that he pushes under his apartment door while she waits outside. On the train she befriends a young woman, Patrice Harkness (Phyllis Thaxter), who is also pregnant, and her husband Hugh (Richard Denning). Helen learns that Patrice and Hugh are travelling to Caulfield in Illinios and that Hugh’s parents have never met Patrice. In the women’s bathroom Patrice, as she washes herself, asks Helen to put on her (Patrice’s) wedding ring. As Helen complies she asks Patrice whether she is afraid that this may bring her bad luck. Just as Patrice replies, “I couldn’t have bad luck”, the train leaves the railway tracks and topples over, killing Patrice and Hugh. Helen wakes up in hospital screaming “where is my baby” and then notices the name and date on her hospital clipboard: “Patrice Harkness, July 4, 1948”. When the nurse notices Helen’s agitation she asks: “Does the sight of your name frighten you?”

For the sake of her baby Helen assumes Patrice’s identity and slowly ingratiates herself into the wealthy Harkness family and, in particular, into the emotions of the matriarch, Grace Harkness (Jane Cowl) and her son Bill. This deception almost destroys Helen as she is in constant fear of exposure. Her disturbed mental state is effectively captured by director Leisen during Helen’s train journey to meet her new “family” in Caulfield and the sound of the train wheels are synchronised with Helen’s narration as she desperately tries to convince herself that “it isn’t too late”. Her cry climaxes with the news that the next station is “Caulfield” and Leisen’s careful crosscutting between Mrs. Harkness waiting on the platform and Helen inside the train forces the audience to share her inner turmoil.

There is no respite for Helen inside the Harkness family, its upper-middle class rituals, everyday actions and discussions only intensify her anxieties. This comes to a head just before Christmas as a telegram arrives for “Patrice” as Helen is decorating the family tree. It demands to know: “What are you doing here? Where did you come from?” Eventually Stephen Morley appears and blackmails Helen into marrying him. This provides the catalyst for a sudden change in her character. Instead of the frightened woman scared of constant exposure, Helen is transformed into noir’s alter ego, the murderous femme fatale, as Stanwyck readily embraces the persona perfected in earlier noir films such as Double Indemnity (1944), The Strange Love of Martha Ivers (1946) and The File on Thelma Jordan (1949).

No Man of Her Own remains faithful to Woolrich’s novel up to the final minutes when it bypasses the nihilism of Woolrich’s ending as screenwriters Sally Benson and Catherine Turney borrow the conclusion from Woolrich’s novella, They Call Me Patrice (published in 1946 in the woman’s magazine Today’s Woman). Although it weakens the film, the change is understandable in terms of the film’s target audience which was the same as the readership for Today’s Woman.

After Woolrich’s death in 1968, the following fragment was found in his papers: