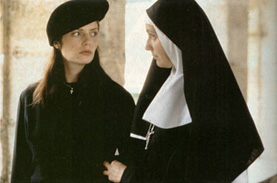 “If you judge by appearances in this place”, replied Mme. De Chartres, “you will often be deceived. What seems to be is almost never the truth.” (1)

It is frankly impossible to imagine two directors (or two films) more disparate than this last duo. Zulawski’s is an aggressively radical modernisation, replacing the court of Henri II of France with the empire of a vulgar high-tech media tycoon a la Rupert Murdoch. In place of refined but deadly court intrigues, we witness orgies of copulation, cocaine sniffing and tabloid excess. (A restrained film by Zulawski’s usual standard, La Fidélité is luridly bonkers by anyone else’s.) In contrast, Oliveira’s updating takes place in a world that has changed alarmingly little since Marie-Madeleine, Madame de La Fayette, first published her novel in 1678 – the discreetly insular realm of European nobility, with its cautious but constant wealth, as well as its keenly observed and ever-shifting social alliances. “We are rare creatures”, the heroine’s mother (Françoise Fabian) observes languidly at a high-toned soiree – as the pianist Maria Joao Pires tinkles elegantly in the background. That is, perhaps, putting it mildly.

So rarefied a setting might strike us as vaguely ludicrous, had not Oliveira (at 90-odd, probably the world’s oldest working film director, his credits stretching back to 1931) perfected a visual style that is frankly timeless. While the characters in The Letter drive modern cars and wear the latest Cerruti fashions, not one of them would be seen chatting on a mobile telephone or munching on a Big Mac. Their homes are adorned with priceless, if rather dowdy, antiques and objets d’art. Their outdoor conversations take place in severely landscaped formal gardens, most often festooned with neo-Classical mock-Grecian statuary. In one truly fascinating scene, a group of these haute couture fossils actually sit and watch the TV news. Immobile, staring out from behind the TV, the camera does not once show the electronic image on screen. We hear only a news presenter’s voice reporting a civil war in Africa, see only the aristocrats’ noses wrinkled in well-bred distaste.

Ironically, Oliveira’s classically reticent style is ideally suited to Madame de La Fayette’s plot. A young noblewoman (Chiara Mastroianni) makes a socially advantageous marriage to a man she has no special feelings for either way. She meets another man, they fall for each other passionately – and spend the rest of their lives failing to have an affair. “I confess”, says the heroine in the novel, “that I can be led by my passions, but I will not be blinded by them” (2). Her scruples have nothing in particular to do with morality – but much to do with honour, reputation and social status. Even when her husband dies, our heroine refuses categorically to marry the man she loves. Quite lucidly, she sacrifices both herself and her suitor to “a duty that exists only in my imagination” (3).

An odd choice of material for the flamboyant Zulawski, but tailor-made (or so one might think) for Oliveira. His work over the past 15 years would seem to embody Susan Sontag’s notion of “silent” art. In their coolly minimalist aesthetic, such films as Abraham Valley (1993) and Party (1996) achieve precisely that “scouring and harmonious sharpening of the senses” that Sontag evokes (4). Riveting us with a hypnotic economy of means, these films grant us “no release from attention, because there has never, in principle, been any soliciting of it” (5). If The Letter is ultimately less successful, that may be because Oliveira disrupts his timeless style in odd and inconsistent ways. Giving occasional ground to modernity, he lets in intrusions of noise that shatter his aesthetic of silence.

The courtly world of La Princesse de Cleves is both splendid and terrifying in its all-embracing completeness. Its characters all inhabit the same world, not because they are snobs, but because they are able to conceive of no other. (Perversely enough, the same is true in La Fidélité – where every anti-establishment firebrand winds up on the corporate payroll.) Oliveira’s fatal error in The Letter is to make his heroine’s love interest an outsider, a pop singer (Pedro Abrunhosa, playing himself) whose blaring ballads, velvet suits and day-glo platform trainers recall the most lurid excesses of the Eurovision Song Contest. Stylistically, his presence is impossible to reconcile with the rest of the film. Dramatically, his “romantic rebel” persona makes nonsense of the plot. As soon as Oliveira presents his heroine with an “alternative” to her aridly aristocratic world, we in the audience can’t help but question the absolute hold that such a world has over a young woman’s thoughts and actions.

That may, of course, be Oliveira’s conscious and legitimate intention. Sadly, the quaint and fragile mechanism of Madame de La Fayette’s plot cannot withstand the shock. Her world, like that of ancient Greek tragedy, must be absolute in order to exist at all. The letter of the title is one more violation of that world’s invulnerable nature. Writing to her best friend, a nun (Leonor Silveira), the widowed heroine tells of her new life as a relief worker in the war zones of Africa. Laudable, yes, but her escape shatters the film beyond repair. The world of La Princesse de Cleves (as the opening quotation suggests) is one of total deception. A distorting Hall of Mirrors with nary a glimpse of reality outside. In a frustrating contrast, The Letter is a Hall of Mirrors with its EXIT clearly marked in blazing neon lights. Worth going in, of course, but you may not be all that sorry to leave.