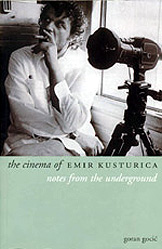 Some filmmakers’ work possess such vitality the films have the effect of energising or frazzling the viewer. This is often because the world created has a closed off, insular feel, where the director’s vision isn’t so much a phenomenological take on the surface of the world which creates a querying, speculative freedom for the viewer – as in Rossellini, Antonioni, or Wenders – but a new world itself, a world charged by an interior sense of creation rather than an exterior sense of observation. For some such a world is a sign of weakness. As Michel Mourlet said in a Cahiers du cinéma article in 1960, “for an artist to have a ‘universe’ is an admission of inadequacy, of limitation and, more importantly, of artifice” (1). We needn’t go as far as Mourlet but is there not in much of Fellini’s work, and certainly in Emir Kusturica’s, a sense of the filmmaker as less onlooker than master of ceremonies? This is a type of cinema that seems less influenced by art, theatre or literature than by the circus, and many of the strengths of Goran Gocic’s profile on the filmmaker lie in capturing this frenetic, decidedly free-form social and socialising energy.

Halfway through the book Kusturica says that a filmmaker needs to create a pure world of his own, and Gocic’s especially good at looking at the specifics of the world Kusturica creates. We see, for example, how important animals are, the way they live “in symbiosis with people, [and] are rather signified as ‘neutral’” (p. 72). Gocic may talk about the animals in Kusturica’s films “symbolically”, but he makes his most insightful points when he sees the animals as part of Kusturican everyday life: this isn’t so much the lunatics taking over the asylum as the animals taking over the director’s circus. If, as Gocic claims, animals are used very differently in the cinema of the West, the difference may lie not necessarily in the animals’ function as symbolically significant, but in the way they float through the narrative without giving it any great significance. In one amusing passage Gocic offers an animal inventory to Kusturica’s films, with Underground offering us a parrot, a monkey, a goose, a tiger, an elephant, fish, a pig, a cat, cows, a donkey, a horse and a deer, and Black Cat, White Cat (Emir Kusturica, 1998) cats dogs, a rat, ducks, a turkey and a hog (p. 71). Where a singular pet and its possible demise (think of Michael [Nora Ephron, 1996]) is enough of an animal presence for Hollywood, in Kusturica animals don’t function as a sentimental device (as in Michael), or a portentously symbolic one (as in the cross cutting sequence of the cow and Brando being hacked to death in Apocalypse Now [Francis Ford Coppola, 1977]) but as part of the general order of things. When they are brought in narratively it’s often obliviously, as we watch the various life forms finding their world disturbed by some humanly created chaos, like the oblivious geese near the end of Black Cat, White Cat.

If animals are both peripheral and yet central – they might not have the narrative or symbolic significance demanded of Hollywood, but they’re obviously much more present in general existence – this is just part of a more general peripheral/centralising motif throughout Kusturica’s work. For Kusturica’s films’ sense of exhaustion partially comes from a lack of progression. Time certainly passes, and money is made and opportunities offered, but we sense any external development is secondary to a general continuation. Kusturica’s is a world that’s cyclical rather than developmental, so any idea of ambition is viewed as somehow peripheral to the film’s giddy centre where petty squabbles and familial strife offer more room for the Kusturican chaos. And thus the animal kingdom reflects rather than symbolises Kusturica’s world, because the animals’ own often frenetic energy seems in keeping with the director’s need to suggest man’s wider insignificance.

It’s as if what interests Kusturica is the concentration of energy particles, whatever life form they take. And part of this interest is in the very form he arranges these particles. One thinks here not in terms of narrative, the way a filmmaker distributes tension throughout a film, but instead in terms of bodily configurations. Kusturica shares with Fellini the ring master’s fascination with extremes: the very tall and the very small, the enormously fat and the thoroughly scrawny. This is mother nature as humorous progenitor, at odds with the idea of self-conscious stardom – be that the carefully worked out body of a Stallone or a Schwarzenegger, or a Methodologically debauched physique of a De Niro – yet perhaps central to a type of cinema proposed by, amongst others, key ’90s theorists like Nicole Brenez and Vincent Amiel. Here the interest lies in undermining intentionality in all its organised manifestations for the physical world in all its absurd contingency. This is close to Amiel’s comment, quoted in an article in the film journal Studies in French Cinema: “Each moment of the body is lived for itself rather than in the mechanical articulation of a succession” (2). If the self-conscious body lends itself well to the manifestation of narrative, does the un-self-conscious body lend itself particularly well to films lacking such motivated momentum?

It’s the difference between, if you like, what happens to the body, and what the body allows to happen to it. In this sense there is a closer affinity between man and beast in the Hollywood film than man in a Hollywood film and man in a Kusturica film, for if in the mainstream film man and beast function according to intent – say, the definitive action on the actors’ part; the manipulative beseechment on the animal’s – in Kusturica man and beast are usually presented as being rather than doing. There are motivated actions in Kusturica – most famously, the central character keeping the underground community in Underground in ignorance of the fact WWII has ended – but Kusturica is less interested in the motivated action than the subsequent absurdity of the underground characters living their lives so obliviously.

We could say Kusturica creates characters who lack grounding, who lack the motivated principles that can create narrative. In some ways he would agree, saying “I had a teacher in Prague who told me: ‘You tell a good movie from a bad one by the fact that in the good ones every character looks like they’re running out of gravity’. I thought, why don’t I really make people levitate, like Chagall?” (p. 89) But if in Kusturica people lack the momentum of Hollywood characters they also lack the search for momentum, the search for purpose we find in the films of Wenders, Antonioni and recent Garrel, for example. In these films people are often caught between heaviness and lightness; in Kusturica lightness is a given, so that suicide, murder, marriage, success even in the relative present all have the same wider irrelevance, and this is perhaps where the circus metaphor is most applicable. Filmmakers like Wenders and Garrel capture their characters in paradoxes of weightiness and light – if one is to feel light, nothing matters, but if one feels heavy everything matters. So that events like a Nazi past (in Wenders’ Kings of the Road [1974]) or May ’68 (in Garrel’s Le vent de la nuit [1999]) carry great weight if one acknowledges their presence, or, on the flipside, almost no weight at all if one is to ignore them. They are, whatever Kusturica’s claims about lightness, great films of accumulating gravity as the characters increase the weight of their being no matter the nature of their existential flight. This is obviously not Kusturica’s interest; he gives to all events the absurd belief that nothing matters but matter, that personal purpose, death, love and sex are all part of the flux.

Gocic would see this as an example of Kusturica’s ability to get inside his subject matter. Comparing Kusturica’s use of poverty with fellow Balkan director Goran (Cabaret Balkan [1998]) Paskaljevic, Gocic believes Paskaljevic’s approach is “politically motivated and satirical”, Kusturica’s is “individually aimed and celebratory” (p. 102) Gocic perceives Kusturica’s as an insider perspective, but is this, we might ask, a perspective that isn’t so much inside the world Kusturica explores, but inside the director’s head? And is this both the strength and the weakness of Kusturica’s films? If, as we suggested at the beginning of this review, Kusturica’s world can as readily frazzle as energise, what is it that’s responsible for this frazzled feel? If nothing matters but matter, there’s perhaps a lack of significance to his work, a point made by one critic when he says, of Underground, “there’s less here than meets the eye”. And is this where we once again see the circus influence, where the notion of spectacle is more important than any notion of meaning? Thus, like the circus, Kusturica’s films are claustrophobic and yet, for many, curiously uninvolving. Yes, we’re inside a world – as if inside the tent – but we’re also outside the lives, because the master of ceremonies’ job isn’t to reveal selves but show the superficial actions of the body, apart from any probing interest in minds’ in relation to bodies. What he offers instead is one mind – his own – and the observations of that mind on the external nature of his characters. The idea of man, animal, vegetable and mineral all as one has a certain purity, but it also often has in Kusturica an atrophying inertness. What we’re offered is an equalising effect, certainly, but if there is something undermining this final effect of matter being observed, it’s that it’s being observed through a subjectivity that makes this apparent oneness of life appear like the oneness of a possessive consciousness. If one shares something of Kusturica’s world view – an often anti-intellectual, exuberant cynicism – the cinematic largesse can energise; if one doesn’t, feeling frazzled is the likely result. Gocic does an excellent job of encapsulating Kusturica’s vision, but he’s unlikely to convince a hardened admirer of cinema as a phenomenological breathing space of Kusturica’s final importance. We’re back to Mourlet and what he expects from great art. “It is a question not of a universe, but of the universe; not of a world that may or may not be, but of the real world” (3).

The Cinema of Emir Kusturica: Notes from the Underground, by Goran Gocic, Wallflower Press, London, 2001.