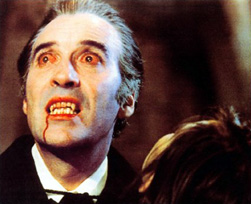 On its initial release, Dracula (mostly known as Horror of Dracula outside of Britain) evoked storms of protest from aesthetic and moral guardians of the British establishment that are difficult to understand today, especially in a contemporary culture where “anything goes”. But, unlike many examples of British mainstream cinema, it is not a “museum” piece, still retaining its power to shock on historical and generic levels.

Horror of Dracula appeared at a pivotal time in British culture when it began to move away from the repressive world of the early 1950s – depicted in Mike Leigh’s Vera Drake (2004) – and towards a different type of life (an era aptly evoked and encapsulated by the subsequent mantra of British Conservative Prime Minister, Harold Macmillan; “You never had it so good”). During this period, Britain experienced a more consumerist lifestyle, a youth culture influenced by Hollywood cinema and rock-and-roll, the aftermath of the 1956 Suez Canal crisis, and the “Angry Young Man” movement in British theatre. Horror of Dracula can be understood as horror’s response to this turbulent social change. But, as an early example of Hammer horror, it contains conflicting cultural values.

Like the often critically despised films of The Archers and Gainsborough melodrama, Horror of Dracula offered contemporary viewers the taboo cinematic elements of spectacle and excess that offended establishment definitions of the proper “realist” nature of British cinema. In his pioneering study A Heritage of Horror, David Pirie recognised that Hammer horror represented the return of a repressed Romantic British literary tradition, with Christopher Lee’s Count Dracula reincarnating Byron’s Fatal Nobleman as a Vampire (1). When Lee speaks his first lines, he not only extinguishes the Universal Studios legacy of Bela Lugosi, but also returns the Count to his rightful place in British culture. But unlike Lugosi, Lee is definitely one of “us”. As in Bram Stoker’s original novel, the Count speaks perfect English and does not need to struggle with his vowels (2). Lee’s Dracula also evokes hidden desires within his victims, collapsing those British ideological barriers of repressive sexuality and “good taste”.

Terence Fisher’s direction, Jimmy Sangster’s screenplay, Jack Asher’s colour, semi-expressionist cinematography, Bernard Robinson’s set designs for the interior of Dracula’s castle, and James Bernard’s pondering, oppressive, quasi-Wagnerian score featuring a repetitive “leitmotif” for the Count, collaboratively contribute to a sense of the cinematic “return of the repressed”. Fisher had previously worked on Gainsborough melodramas, editing the sexually teasing The Wicked Lady (1945) and co-directing So Long at the Fair (1949), a film that warned innocent English people about the danger of venturing abroad – anticipating Tony Blair and George Bush by blaming the French for their problems. Similarly, Fisher’s The Stranglers of Bombay (1960) represented another xenophobic warning of such dangers, not dissimilar to the experiences of the Holmwood family who reside too close to Dracula’s Transylvanian castle. Apart from Peter Cushing’s English-accented Van Helsing, the British prove themselves both inept and inexperienced when encountering the foreign threat.

Jonathan Harker (John Van Eyssen) first encounters Dracula as he appears in long shot, a dark figure at the top of the stairs. The camera remains immobile as Dracula walks towards it, finally pausing in a low-angle close-up. He introduces himself with a quick suggestive flash of the teeth. Lee’s first appearance already defines him as a libidinous sexual predator free from British social constraints. His presence is not only reminiscent of the star’s first walk-on role in a British theatrical production but also evokes memories of those costumed heroes of Gainsborough Melodrama such as James Mason and Stewart Granger, actors who could have played the immortal Count had they not gone to Hollywood. Despite third billing, Lee is the real star of the film. His antagonists all appear drained of vitality before his passionate presence. Their repressive demeanour and ineptitude often facilitate the Count’s work.

Unlike his character in the novel, Van Eyssen’s Harker is middle-aged. He is closer in age to Van Helsing and Arthur Holmwood (Michael Gough) than fiancée Lucy (Carol Marsh), who resembles a Victorian “child bride” until she is awoken to sexual maturity. Ultimately, Harker’s supercilious paternalism results in his undoing when he confronts the vampire woman (Valerie Gaunt) for the second time. He caresses her like a smug, British public school housemaster leaving him defenceless before the fatal bite. But restraint also intervenes. When Dracula punishes the woman, offscreen sounds “tastefully” omit what is happening to her. But why doesn’t Harker strike a stake into the Count first when he later discovers the two coffins? Maybe he wishes to avenge the loss of his virginity, taking the vampire version of the “missionary position” to heart. Harker may also secretly wish for Dracula’s final revenge by implicitly evoking another “love that dare not speak its name”. When he ultimately faces the Count, he drops his tools in a manner anticipating Lucy’s prim Victorian heroine.

Lucy’s voluptuous vampire soon forgets boring Jonathan and instead attempts under-age sex with Tania (Janina Faye, who would later appear in Hammer’s 1960 film, Never take Sweets from a Stranger). She also exhibits incestuous feelings towards her equally boring brother, Arthur, before Van Helsing intervenes. The Count later turns to Arthur’s repressed wife Mina (Melissa Stribling). She returns from her first night with the Count exhibiting a deep smile of sexual satisfaction, her neck covered by a fur collar suggesting her new status as an adulterous “Venus in Fur”. She has removed Dracula’s coffin “below stairs”, a position similar to its original resting place in his castle.

However, Horror of Dracula cannot embrace entirely the excessive sexuality and supernatural overtones of its Hammer successors. British “common sense” must prevail. Thus Van Helsing represents a rational scientific alternative. He uses a dictaphone, compares vampirism to drug addiction (a growing, but repressed, problem in 1950s Britain), denies that the Count can change his shape, and uses a blood transfusion to help Mina rather than the garlic originally suggested to save Lucy. Like those mundane schoolteachers Ian and Barbara in early episodes of BBC TV’s Dr. Who, he represents a common sense alternative designed to prevent the fantastic from totally challenging British normality. Like Shaun of the Dead (Edgar Wright, 2004), Horror of Dracula engages in its own forms of cultural hesitation to disavow the radical challenges percolating within the horror genre.

While the Ealing-shot Shaun of the Dead overindulges in laddish comedy and profanity, Horror of Dracula employs British vaudeville humour to undercut the radical dimensions of its genre in a manner similar to Stanley Holloway’s gargling interruptions to the attempted kiss of Barbara Murray and Paul Dupuis in Passport to Pimlico (Henry Cornelius, 1949). This helps explain several supposedly irrelevant sequences such as that focusing on the lower class stupidity of Van Helsing’s servant (Geoffrey Bayldon), who fails to understand the role of “his master’s voice”. Also, when the undertaker (Miles Malleson) escorts Van Helsing and Holmwood into the ominously named “Marx Funeral Parlor”, he utters a redundant joke so as to disavow the disturbing implications contained in the name of his establishment. Furthermore, the frontier guard (George Benson, then known for his comic appearances in Hovis TV commercials) sees his authority undermined in scenes that verge on slapstick comedy.

As Pam Cook has noted in her work on Gainsborough, it is a mistake to identify a studio with one particular genre (3). Hammer produced films in a diverse number of genres including, at this time, comedy. However, the comic scenes do not provide the kind of temporary relief found in MacBeth‘s porter scene. Instead, they are designed to disavow the darkness, not highlight it in the manner of Shakespeare’s scene. These comic interludes attempt to undermine subversive implications, so that audiences do not attempt to engage in any unacceptable sociological readings of the Dracula narrative (4). Stylistically, Horror of Dracula represented a breakthrough for British horror cinema. But its implications remain obscured by many devices and elements transplanted from traditional British culture.