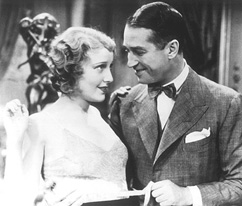 I decided to make it lyrical, thoroughly stylised: a film in which the whole action of actors, as well as the movement of camera and cutting was rhythmic. Then I got Rodgers and Hart to write the music…. We finished the whole score before I began to work on the script. We did the whole thing to a metronome, because we couldn’t carry an orchestra round with us.

I’m a great believer in conversational rhythm. I think in terms of rhythmic dialogue. It’s so easy, you can talk naturally. It’s like peas rolling off a knife. Take the great screen actors and actresses, Bette Davis, Eddie Robinson, Jimmy Cagney, Spencer Tracy. They all talk in rhythm. And rhythm and movement are the life of the screen.

Princess: Then why do I lie awake in bed? And why does the blood rush to my head?

Princess: Quite right. At night. And why does music make me so sad? And why do love songs drive me mad?

– from Love Me Tonight

One of the auteurist myths surrounding Rouben Mamoulian’s Love Me Tonight is that it represents “the Lubitsch film that Lubitsch was always trying to pull off but never quite did” (3). Mamoulian’s racy musical indeed stars two reigning spirits of Lubitschland, saucily sexy Jeanette MacDonald and flamboyantly flirtatious Maurice Chevalier, paired here, midway between their dazzling success in The Love Parade (1929) and The Merry Widow (1934), each a definitive Lubitsch masterwork. The participation of cinematographer Victor Milner and art director Hans Dreier further tempts us to label Love Me Tonight as “Lubitschean”. However, these studio-contracted contributions are likely to be of less than “Paramount” significance to a film that is distinctively and quintessentially Mamoulian’s.

While Lubitsch practically perfected the “naughty operetta”, always pushing its frilly edges toward the invention of the Hollywood Musical, it took an inspired eclectic like Russian-born, theatre-trained Mamoulian to flashily expand on the blueprint provided by such comparatively intimate “chamber” pieces as Monte Carlo (1930) and The Smiling Lieutenant (1931). Mamoulian amplifies and opens out Lubitsch into something quite different, something more broadly epic. As has been properly observed, “Love Me Tonight is a kind of bravura effusion” and “Mamoulian is a spectacularist; Lubitsch is not” (4). On its own boldly innovative terms, Mamoulian’s joyfully “out there” romp is stylistically and thematically, a remarkable accomplishment, a 1930s filmusical justly acclaimed as “one of the great films of the decade” (5).

Love Me Tonight opens impressively. A short series of documentary-like glimpses of early morning Parisian street-life segue into a symphonic collage of urban sights and sounds as various denizens and tradespeople go about their routine tasks: step-sweeping, rug-beating, knife-sharpening, barrow-pushing. This carefully pitched, atmospherically orchestrated din climaxes with a dolly-in on Chevalier’s emblematic straw boater before we’re introduced to an exuberant Maurice, greeting us with “Song of Paree” (“You could sell your son and daughter/For just one Latin quarter”), the first number in a felicitous Rodgers and Hart score.

Within minutes Maurice, a tailor, is chatting with a customer in rhyming couplets which transform into the spritely strains of “Isn’t it Romantic?” The song is passed, daisy-chain fashion, from shop to taxi to train to open-fields to gypsy-campfire to castle-balcony where La MacDonald picks it up in operatic soprano mode. Even before the fairytale plot has brought them together, the fated-to-be-mated commoner and princess have linked up on the transporting wings of song. The first quarter hour alone would qualify Love Me Tonight as an ingeniously conceived, imaginatively executed filmusical classic.

The gossamer-thin storyline has Maurice posing as an aristocratic Baron to extricate payment for long overdue bills from profligate party boy Viscount de Vareze (Charles Ruggles) who’s barely held in check by his stuffy uncle, the duke (C. Aubrey Smith), who’s concerned about finding an eligible noble-bred spouse for his forever-swooning Princess Jeanette (MacDonald and Chevalier were by now such an established star team that their characters could self-referentially sport their real names). Along for the ride are young and comely Myrna Loy, absolutely delicious as a man-crazy Countess (who when not thinking about men, thinks about schoolboys), Charles Butterworth, delightfully drippy as a hapless suitor (who’s fallen on his flute) and the fine character actress Elizabeth Patterson, heading a trio of Greek-chorusy, aged aunts (who yap and yarn as they sew and darn).

Among the film’s spectacular highlights are: Princess Jeanette’s flip delivery of the yearning evergreen “Lover” from a horse-drawn cart that promptly crashes; Chevalier’s jauntily eye-brow-raising performance of “Mimi” and its clever carry-over reprise; a bloodless stag hunt capped by a sweetly apt slow-motion passage; the film’s title song rendered as a subconsciously dreamed duet via diagonally split-screen close-ups of the two leads; a breathtaking finale that uses Soviet-style superimposition and montage to pit Jeanette on racing steed against a speeding locomotive. These daring technical coups are matched by some similarly audacious pre-Hays Code dialogue, resulting in a general air of mischievously festive experiment. In fact most stops are pulled out in this shamelessly showy extravaganza from a filmmaker who’d already made pioneering advances with sound and image in such groundbreaking early talkies as Applause (1929), City Streets (1931) and Dr Jekyll and Mr. Hyde (1932).

Formally adventurous and frothily naughty-and-nice, Love Me Tonight can also boast, at the base of its whipped-cream dish of Ruritanian escapism, an almost brazen class-consciousness. For all his princely charms, Maurice raffishly embodies an imitative petit bourgeois, forced to confront a hidebound elite. For all her princessy graces, Jeanette must see beyond station and propriety and connect with the real urges of the real woman underneath all the deluxe froufrou. At one point Maurice remarks to her “You know too much about hunting, etiquette, tradition. You know nothing about style, charm, love.” Admittedly a compromised, romanticised denunciation of social strictures but a put-down, nonetheless. As if to suggest a darker, more dangerous side to our beaming working-class hero, Maurice’s enactment at the fancy-dress ball of “The Poor Apache” routine touches on illegitimacy, poverty, petty crime, domestic violence and finally that most brutally efficient disposer of the dispossessed, the guillotine!

For street-wise punk poetics amidst the posh pompadours and fancy bodices; for a brilliantly paced scenario and score; for Maurice and Jeanette in their pluckily playful prime; for crusty, bushy-browed C. Aubrey Smith getting out of bed to sing “Mimi”; for the Mamoulian film that Mamoulian actually did pull off, spectacularly: you’re gonna just love Love Me Tonight (6).