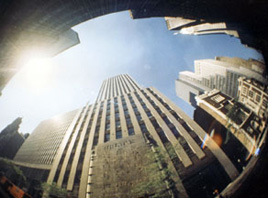 Whilst Daybreak Express is often noted as one of the pioneering examples of cinéma-vérité, or direct cinema, it is its production history which is arguably a greater source of interest to the amateur filmmaker. For it is in director D. A. Pennebaker’s approach to making a film overall that those of us not born holding a Super-8 camera might find inspiration.

Guided by the Duke Ellington track of the same name, this five-minute documentary takes us from one end of a New York subway route to the other, providing the audience with a view of the mid-20th century metropolis. Ellington composed and recorded his track in 1933; Pennebaker, when deciding to make his film in 1953, rifled through his collection of jazz 78″s looking for inspiration, and came up with this. 20 years after the original recording, the music sounds as groundbreaking and dramatic as the film looks.

While working as a copywriter, Pennebaker decided he wanted to make a film. Deciding that he would make something based on Ellington’s composition, he calculated he would only need one roll of film (at three minutes per roll) because he thought the 78″ “was about three minutes long” (1). He did buy one more roll and was surprised to find that he needed both and even had to buy a few more. Upon completion of the three day shoot, Pennebaker then faced the obstacle of how to get that film into a form suitable for projection: he also had no idea how to edit it, so as with other myths and legends surrounding the process of creation, the footage languished in the back of a cupboard for years until someone showed him how. Having overcome these hurdles, Pennebaker learnt about the next part of the process: exhibition. He approached a local theatre and asked how he could get his film shown in the cinema. He was told that the cinema would buy it from him for $100 or they would rent it off him for $25 a week. Although renting seemed the better deal, he was advised that this was often not the case, since this was entirely dependent on the run of the feature the film would precede. If the feature was not selling well, then it would close after a week, maybe two, leaving the filmmaker with barely enough to cover the cost of the print. Pennebaker chose to rent Daybreak Express to the theatre anyway, and it showed for a year due to the success of the feature it accompanied, The Horse’s Mouth (Ronald Neame, 1958).

These sorts of details conform to one type of success narrative, that of a determination coupled with naivete but facilitated by some lucky breaks nonetheless (Ellington also gave Pennebaker the rights to use the music). But it’s also the sort of tale that constructs Pennebaker as a figure closer to us than Steven Spielberg (who was making Super-8 movies from his adolescence onwards) or Roman Polanski (a war orphan who went to film school at the age of 18). Rather, we have before us a person, who not having grown up around the equipment, nor in a social milieu of arts practitioners, still thought he would like to make a film.

Daybreak Express is often considered groundbreaking in its approach to documentary form because it uses no voiceover narration, deploys a non-linear style of editing and incorporates what is often called a “raw” approach to lighting and colour. At the time, voiceover narration, uniform and aesthetically pleasing composition, and linear editing were commonly felt to convey an appropriate sense of distance, cementing the dichotomy of subject and object. As such, Daybreak Express can be read as a response to that aesthetic, a response that itself would become increasingly utilised in the service of documentaries that conformed well to the requirements of the dramatic narrative, and that translate well into ratings or cinema admissions. Witness, for example, the success of Big Brother, a phenomenon partly predicated on its claims of capturing reality, and supported by the use of harsh lighting and a decentralised subject. The impulse to translate experience directly into “seeing” has become another aesthetic associated with rawness and truth. As such, the success of Pennebaker’s project (he makes films with partner with Chris Hegedus to this day) lies less within his ability to create an aesthetic predisposed to particular goals (such as truth or immediacy), and more within the integrity of his vision. From this perspective, there is no one set of devices by which a result may be achieved  only a willingness to experiment with structure. It therefore seems fitting that, as with the Ellington composition, Daybreak Express displays a willingness to strip back the exigencies of aesthetic formalism. Running alongside the discordance and difficult time structures  of the jazz classic, whole sequences in Pennebaker’s train journey occur in darkness, in dimly lit carriages shot with fish-eye lenses and red filters. From the carriage window we view the backs of factories and the grimy streets that lie beyond the impressive skyscrapers and neo-classical facades of the inner city. In other words, Pennebaker presents the inherent discordance of a buzzing, mid-century metropolis, and exhibits a determination to not subordinate the possibilities of his medium to transient notions of aesthetic balance.