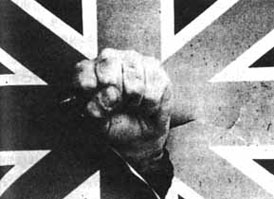 Jean-Luc Godard’s wildly polemical piece of political cinema, British Sounds, offers clear evidence at the end of the 1960s that the French nouvelle vague (New Wave) was anything but monolithic or even offered a coherent or unified philosophy of filmmaking practice and intent. Stylistically, politically, artistically, this narrative-free movie could scarcely be more different from the smooth Hitchcockian thrillers of Claude Chabrol, the poetic vision of Jacques Demy, or the more gentle humanism of François Truffaut (1).

Indeed Godard, by this stage was at pains to distance himself from what he loudly and persistently referred to as an irrelevant and bourgeois tendency in contemporary French cinema. Godard was particularly down on any narrative cinema at this time and engaged in angry and polemical exchanges with a rather bewildered Truffaut (amongst others).

Certainly British Sounds could have been made by no other director in world cinema at that time, though Godard was opening the doors to a return to the agitprop cinema of the 1920s, specifically that of the Soviet documentary filmmaker Dziga Vertov, patron saint of Godard’s own movie-making collective.

Just like A Letter to Jane (Godard and Gorin, 1972), British Sounds is, in one sense, a very long lecture (or harangue) by two filmmakers that is almost the purest example of agitprop in modern cinematic history. But it still makes fascinating viewing and sums up a period in the political life of cinema that can usefully be compared to the more formalist stylistic strictures of Lars von Trier’s Dogme group.

Certainly, Vertov’s own films still look revolutionary today – in a way that Godard’s do not. A contemporary digital video clip screened alongside Vertov’s work from the 1920s might not look so modern (or post-modern) after all. Created largely from documentary footage, Vertov’s films represented an intricate blend of art and political and poetic rhetoric. It was this aesthetic, as well as the accompanying polemic, that Godard was trying to emulate: “The film drama is the Opium of the people… down with Bourgeois fairy-tale scenarios… long live life as it is!” (2)

All this sounds as much like the Italian Futurist Marinetti as it does like von Trier’s proscriptions for the Dogme film group in the very late years of the 20th century. Just compare Vertov (above) with this statement from the (Dogme) Group Manifesto of 1995:

The anti-bourgeois cinema itself became bourgeois, because the foundations upon which its theories were based was the bourgeois perception of art. The auteur concept was bourgeois romanticism from the very start and thereby … false!

Godard and his collective would have agreed, at least with the type of filmmaking practice demanded. The street revolution of 1968 might have been over but the time was as right for a new revolutionary cinema for the new worker’s movements as it was for more deadly theories like those behind Germany’s Baader-Meinhof gang or Italy’s Brigate Rosse (Red Brigades).

The film itself, at 54 minutes no longer than a TV documentary, is certainly a startling, uncompromising attempt at Revolutionary Cinema. It marked a new stage in the aesthetic evolution of modern cinema’s most radical maverick. With this film, Godard loosed a propagandistic audio-visual barrage on the senses, which combined Maoism, The Beatles, multiple soundtracks, a point zero of cinema style, nudity (female, of course), excerpts from Richard Nixon, Georges Pompidou, and The Communist Manifesto.

There are six major sequences in the film, each obeying the Groupe Dziga Vertov’s beliefs in the primacy of the long and unmediated shot, interspersed with graphic and polemical moments. Thus, the first part is a single ten minute long tracking shot of the MG (itself a bourgeois artifact) assembly line at the British Motor Car Company in Cowley, Oxford. Then, in what seems and purports to be an early attempt at “feminist cinema” (though one constructed from a very male point of view), a nude woman walks around her apartment, chats on the phone and finally turns to face the unwinking and rather prurient camera. There’s also a feminist text read over this scene but it all remains a poorly thought out shot at a less phallocentric cinema.

In the third sequence, shots of workers are intercut with a staged news broadcast running on a TV monitor and in the fifth, students at Essex University are making up radical posters and critiquing pop music. Finally, a fist punches through a Union Jack. All very agitprop and also prefiguring the admittedly less political preoccupations of the British Punk scene – still six or so years away.

The film was made for (and then banned from) London Weekend Television. It is a documentary in style and form, but designed as a political artifact in which Godard contrives to assault the filmgoer’s sensibility with a series of images and provocations. Slogans flashed on the screen are sometimes humorous, sometimes merely decorative, though Godard would deny this bourgeois reading. Several extended scenes, such as those where Dagenham car factory workers discuss workplace relations, are crisp, simple and also an invaluable record of industrial rhetoric.

Throughout British Sounds there is often a sense of authorial control being abandoned and the overall impact of the film not seeming entirely thought through. The scene where radical Essex University students are making posters, confirms a possibly unconscious ironic impression that world political revolution will only come from the real workers who need it: and not from well paid academics – or indeed French filmmakers – who play at the game in what now seems a dilettantish and, indeed, rather privileged manner.