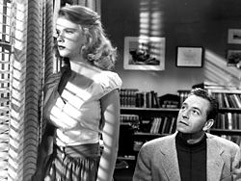 Based on a story co-written and co-scripted with Jean Rouverol and Joseph Than (uncredited), Bernard Vorhaus’ So Young So Bad (1950) represents a tantalising glimpse of lost possibilities for Vorhaus and Rouverol who were blacklisted after the film was made. The term “tantalising” is not used lightly. Although the film depicts certain post-war progressive themes seen in Body and Soul (Robert Rossen), Crossfire (Edward Dmytryk), both 1947, and Force of Evil (Abraham Polonsky, 1949), it also exhibits disturbing ideological contamination undermining its true potential. However, such limitations should be viewed within the appropriate historical context. The film does attempt some opposition against a hostile political climate by attacking the debilitating effects of compromising with an unjust system.

According to Rouverol, Vorhaus suggested working on a screenplay about a girls’ reformatory after he read a news story concerning institutional abuses. After engaging in extensive research and visiting several schools such as the Ventura Home for Girls where inmate’s heads had been shaved, the two completed a script. An upstate New York Jewish home for aged and impoverished blind people became the fictional Elmview Corrections School for Girls (1). Although several major studios expressed interest in the project, the Red Scare eventually led to low-budget financing by the European B-film Danziger Brothers Company on condition that Vorhaus shoot the film in New York State. Apart from some interior scenes in the Astoria Studio, most of the film was shot on location, giving it a quasi neo-realist feeling. As Vorhaus points out, Hollywood studio hesitation resulted from the fact that “this was the beginning of the McCarthy period” and that “anything that didn’t present America as in every way the best of all possible worlds was suspect” (2). Despite initial production difficulties resulting from a low budget, the film became very successful launching the careers of Anne Francis, Anne Jackson, and Rita Moreno. It also gained international distribution (3).

So Young So Bad combines features of the 1930s Warner Brothers’ social consciousness movie, the female prison movie genre, represented by Caged (John Cromwell, 1950), Women’s Prison (Ida Lupino, 1955) and Caged Heat (Jonathan Demme, 1974), with post-war progressive ideals soon to be suppressed by McCarthyism. Narrated via flashback by liberal Polish-American psychiatrist Dr. Jason (Paul Henreid), the film begins with the escape of Loretta (Anne Francis), Jackie (Anne Jackson), and Jane (Enid Pulver) from the state institution. Jason then reflects on the reasons for the seeming failure of his progressive methods. Playing another version of the “understanding doctor” from Now Voyager (Irving Rapper, 1942) and The Scar (Steve Sekely, 1948), Henreid’s Jason attempts to employ humane methods to help delinquent girls adjust to society. After working with combat casualties, he now attempts to aid young female “social casualties”. However, Loretta, Dolores (Rosita Moreno), and Jackie all suffer from traumatic experiences resulting from their exposure to different aspects of a dysfunctional society the film can never explicitly condemn. Attractive, single mother Loretta has obviously suffered sexual abuse from her alcoholic father and has learnt to use bodily charms to manipulate susceptible males. Delores suffers trauma from institutional racism while Jackie’s close female bonding with Jane represents a lesbian alternative that a 1950s film cannot accept.

Loretta must finally learn to accept her maternal responsibilities as a “real woman”, something Jackie can never do. An ideologically framed shot later shows butch Jackie weeping outside a screen door while Loretta now accepts baby son “Butch” in a perverse rendering of the maternal melodrama. Similarly, Jackie must end her suspect friendship with Jane at the climax. While Jane departs for beauty college, Jackie announces her intention of going to California (San Francisco, perhaps?). Jackie is also the last of the original inmates who has to serve more time until her eventual “cure”. Such ideological anachronisms are products of the time.

However, So Young So Bad contains several progressive features. Despite the fact that Dr. Jason represents the privileged character who will resolve problems like the kindly New Deal FDR figures in earlier films such as Wild Boys of the Road (William Wellman, 1933), Henreid’s performance emphasises the character’s genuine humanitarian feelings in a manner evoking his memorable role as anti-Fascist Victor Lazlo from Casablanca (Michael Curtiz, 1943). Jason’s antagonist, Superintendent Riggs (Cecil Clovely), runs the school on totalitarian lines defining the inmates as “congenital criminals” using Nazi terminology to justify his actions. “It’s in their blood, of course”. He employs physical and psychological methods of humiliation akin to concentration camp techniques seen in the “processing” of new inmates who have to strip, receive numbers, and wear dehumanising uniforms. This scene represents a real fear on the part of blacklist victims evoking those “relocation camps” suggested by many Democratic (Hubert Humphrey) and Republican politicians to incarcerate radical Americans following passage of the McCarran Act (4). Aided by wardress Mrs. Beulah (Grace Coppin), Riggs substitutes humane bureaucratic terminology such as “meditation” and “occupational therapy” for solitary confinement and hard physical labour. By contrast, Jason wishes to restore humanity and individuality to the girls by allowing them to wear their own clothes and engage in chosen cultural and recreational pursuits.

Jason represents a reformist “liberal” alternative. But one scene briefly articulates a radical, perspective McCarthyism would soon silence. Jason debates his values with the institutional sexually repressed figure of Assistant Superintendent Miss Levering (Catherine McCleod) who has sold out to the system for job security. She tells him, “I was once an idealist like you. I do what I can within the existing framework by compromising”. Jason replies that compromise eventually leads to “fighting on the enemy’s side”. She eventually realises the value of an oppositional approach held by screenwriter Rouverol and director Vorhaus already in exile by the time of the film’s release. “It’s more than Riggs. It’s the whole system. You have to fight it”.

Despite the inevitable “happy ending”, other values in So Young So Bad remain relevant today revealing the dark side of an American society seeking to suppress dissident voices. When Jason begins his exposure of Riggs, the media launch a hostile “Rupert Murdoch” type smear campaign against him. An emotionally vulnerable Delores has already committed suicide after Beulah sadistically cuts her hair before a school dance. Riggs tortures Jane into lying before a Board of Inquiry. Only the deus ex machina intervention of Loretta and Jackie returning to give evidence, prevent Riggs from continuing his institutional reign of terror. However, this artificially conceived climax suggests that victory is only temporary. Despite the “happy ending” depicting the girls all cured (except for Jackie) and Miss Levering now finding sexual and vocational fulfilment as “Mrs. Jason”, the final scenes shot outdoors in sunshine suggest only a brief respite before another assault of a gathering storm occurs to suppress dissenting expressions whether in cinema or politics.