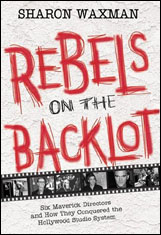 Like Peter Biskind’s Down and Dirty Pictures in 2004, Sharon Waxman’s Rebels On The Backlot was launched by its publisher at this year’s Sundance Film Festival to the kind of media fanfare given to a “state of the nation” speech. Biskind’s book generated controversy because of its acerbic focus on the powerbrokers that form the current confusion that is “American Independent Cinema c.1989 to Now”. The good intentions of Harvey and Bob Weinstein at Miramax and Robert Redford, in particular, were contrasted with the thwarted dreams of several actors, directors, and writers. Slightly more forgiving in tone, Waxman’s book centres on six directors – Quentin Tarantino, Steven Soderbergh, David Fincher, David O. Russell, Spike Jonze, and Paul Thomas Anderson – and their battles to get films like Pulp Fiction (Tarantino, 1994), Traffic (Soderbergh, 2000) Fight Club (Fincher, 1999), Three Kings (Russell, 1999), Being John Malkovich (Jonze, 1999) and Boogie Nights (Anderson, 1997) made.

As she confesses in her introduction, the omission of certain directors will puzzle some readers, but this is a book shaped as much by access (all six directors agreed to be interviewed by Waxman about their films, careers, and, perhaps most problematically, personal lives) as a wider sense of recent film history. Still, Waxman believes her sample consists of directors and movies that have

broken through to a wide audience, that marked the culture in some indelible way, films that over time will be seen as emblematic of the brutal, surreal, confused sensibility, that to me came to define the 1990s – a decade better known for consumer excess and Clintonian dysfunction – and presaged the far more serious world that awaited us beyond the millennium. (xx)

While it is unfortunate that Waxman was unable to cast her net wider to include Spike Lee, Gus Van Sant, Todd Haynes, Allison Anders, or Richard Linklater – to name just a few filmmakers who have also “broken through” on more than one occasion (and who arguably reflect America’s diverse social and regional mix in a more substantial way) – her micro selection of directors does illuminate one important truth about the “Hollywood Studio System”. It cannot be conquered so much as accepted like a force of nature. The “System” is in a constant state of chaos as multinational involvement in larger entities, like Warner Brothers or 20th Century Fox, ebbs and flows; smaller companies, like Miramax or Lion’s Gate, prosper; or others, like October Films, perish. Nor can LA-based studios be credited or blamed for the nurturing or corruption of “mavericks”, since much of the production money for small- or medium-budgeted films comes from eclectic foreign sources such as BBC Films, Canal Plus, or various international banks. Regardless of their place in someone’s rolodex, “maverick” directors, whether they are David Lynch or Boys Don’t Cry‘s (1999) Kimberley Pierce, know that production funding, wherever it comes from, is like the raging sea or fire, a force that must be harnessed with great care in order to make films that people anywhere may actually have an opportunity to see.

Waxman’s book is most illuminating in depicting the constant struggle between personal expression and commercial pressure that makes the notion of the American art film so tantalising and elusive. All six of the directors Waxman profiles are hyper-aware of this struggle. They see the New Hollywood directors of the ’60s and ’70s, as loosely represented by Stanley Kubrick, Arthur Penn, Mike Nichols, Francis Coppola, Martin Scorsese, Steven Spielberg, et al., not just as careers to emulate, but also as examples of what not to do. Tarantino’s debut Reservoir Dogs (1992) was stewarded by Monte Hellman. Soderbergh’s strong friendships with Nichols and Richard Lester have taught him the importance of eclecticism. Despite a background in special effects, commercials and rock videos, David Fincher is revealed as surprisingly cineliterate about films like Satyricon (Federico Fellini, 1969), Dr. Strangelove (Kubrick, 1964) and Open City (Roberto Rossellini, 1945) and his films, for all their technical gloss, are too uncomfortable to be confused with the work of a Tony Scott or Russell Mulcahy. Paul Thomas Anderson unashamedly paid homage to Nashville (Robert Altman, 1975) and GoodFellas (Scorsese, 1990) in Boogie Nights and Magnolia (1999). David O. Russell moves easily from the kind of social satire found in Elaine May’s Heartbreak Kid (1972) and New Leaf (1971) to the more epic scale of irony found in the work of Altman and Kubrick as Three Kings and I Heart Huckabees (2004) illustrate. Even Spike Jonze, portrayed as an ahistorical idiot savant because of his obliviousness to culture pre-1990 (in a memorable exchange with his star on Being John Malkovich, he blithely reveals he has never heard, read or seen The Glass Menagerie), could point to a strong connection with the New Hollywood of the past through his brief marriage to Sofia Coppola.

But where many of the ’60s and ’70s directors relied heavily on the major studios as patrons during the most vital part of their careers, Waxman’s group tends to view each alliance with the studio as a one shot deal. During the making of Fight Club, Fincher fought with Fox executives for every last frame of his ultra-violent final cut with a fervour honed no doubt through endless jockeying with ad agency types. Having emerged from the box office wilderness of films like King of the Hill (1993) and Schizopolis (1996) with hits like Erin Brockovich (2000) and Out of Sight (1998), Soderbergh still found he had to employ almost Machiavellian tactics to handle the script demands of a big name star in order to get Traffic off the ground. So resentful was David Russell of Warner’s stipulation that he use George Clooney in Three Kings that he spent a considerable amount of his energy fighting with the actor on set (despite the fact that the actor seems to have been largely amenable to the experimental aims of the project) in a feud that has entered legend. Of the group, Tarantino seems the luckiest. Although he appears to spend much of his down time in a haze of pot and junk culture, he knows that the phenomenal success of Pulp Fiction, the rocket fuel that launched Miramax into mini-major status, allowed him time enough and the world to muse over his next B-picture-as-A-picture opus, Kill Bill Vol. I (2003) and Vol. II (2004).

Using her journalistic skills honed as an entertainment reporter for The New York Times and The Washington Post, Waxman builds a crosscutting narrative depicting each director engaged in seemingly endless struggles with actors, agents, writers, producers, and executives to bring their respective visions to the screen. The book’s model is obviously Biskind’s Easy Riders Raging Bulls (1998), which set a new standard for thinking man’s gossip, but it also contains tropes found in books like Lillian Ross’ Picture (1952), Steven Bach’s Final Cut (1985), and Julie Saloman’s The Devil’s Candy (1991). As with these authors, Waxman views the directors with an odd mix of admiration and disenchantment. They are so talented, but yet so cold and temperamental! Their personal lives are subordinate to their careers! They are so demanding! So while Waxman provides a vivid sense how being an A-list director often means being completely insensitive or indifferent to the world beyond the set, location or editing room, we do not always get a clear sense of why these directors are artistically important or why their films have managed to attract the attention of large audiences and the acclaim of critics and cineastes around the world. Nor do we get a sense of how this particular generation of talent reflects the aspirations, fears, and concerns of the filmgoing public in the ’90s. One sometimes get the impression that the closer Waxman got to these filmmakers, the less she identified with their goal to make something “personal” and the more she empathised with the suits, from Art Linson to Laura Ziskin, who had to deal with them. Of course, this also raises the question of what Waxman actually means by “maverick” or “independent film” by book’s end. While other filmmakers like Wes Anderson, Alexander Payne, The Wachowski Brothers, or Sam Mendes are discussed to add context, her references are to directors who are still very much insiders compared to legendary risk-takers like Orson Welles, Maya Deren, John Cassavetes, Sam Peckinpah, Jon Jost, the Maysles Brothers, Gregg Araki, and on and on. Waxman’s concluding chapter is like a happy ending hastily shot after a torturous preview, offering little beyond a glib analysis of the effect of the September 11 attacks on subsequent work by the directors she has followed so closely.

Despite her book’s failure to explore the complexities suggested by its subtitle, Waxman does a thorough job of illuminating the idiosyncratic creative processes of each of her subjects. The book ably explores a landscape of contradictions that might best be described as “American Interdependent Filmmaking”, where ambitious young directors discover that it is one thing to be talented, but another thing altogether to manage that talent. While the book tries to end on a cautionary tone similar to Easy Riders Raging Bulls, Soderbergh, Russell, Jonze and company are comparatively demon-free compared to their ’60s and ’70s heroes. They are also fairly distinct from each other in the choice of projects. Fincher has transcended his commercial and music video origins to create films that are critiques of consumerism. Jonze, despite his skater/prankster persona, seems more than capable of balancing irony with pathos (one could easily see him adapting a Thomas Pynchon novel one day) as Being John Malkovich and Adaptation (2002) demonstrate. Russell, like Jonze, seems capable of directing anything and his films to date refuse to play it safe. I Heart Huckabees is a screwball comedy aimed at Godard fans. Paul Thomas Anderson may owe a lot to Altman, but his greater sense of compassion and appreciation of the surreal beauty of ordinary life promise future work of Renoir-like generosity. While it is difficult to see where Tarantino’s obsession with junk culture will lead, one can never underestimate him and by creating his own genre of filmmaking, he is arguably the superstar of Waxman’s group. For me, Soderbergh is the class act of the six. He is the most prolific, the most generous to other filmmakers (his company with George Clooney, Section Eight, could be the subject of a book alone), and, given his experience of early success followed by neglect and then Oscar-winning comeback, is less afraid of taking risks than his peers.

Filmmaking that is independent in spirit, in its choice of content, and in its ability to widen the parameters of what is acceptable as “art” or “entertainment” will always be in a state of crisis. While Waxman’s book never quite achieves its goal of being a sweeping examination of the current generation of American auteurs, its subjects do remind us that when it comes to discussing “American independent film”, it is always the best of times and the worst of times.

Rebels on the Backlot: Six Maverick Directors and How They Conquered the Hollywood Studio System, by Sharon Waxman, Harper Entertainment/Harper Collins, New York, 2005.