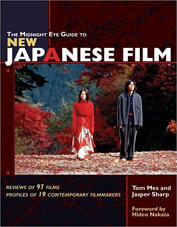 The Midnight Eye website is a common sight when peering over the shoulder of fans of Japanese cinema. Tom Mes and Jasper Sharp edit a formidable resource on all aspects of the Japanese moving image. In particular, their coverage of directors through feature articles and dossiers is likely to be the most comprehensive on the net. The continuing search for the next thrilling iconoclast auteur has helped produce a grand resource of interviews, reviews and articles that investigators, academics, fans and aspirants have come to rely on.

The Midnight Eye Guide to New Japanese Film has clearly grown out of the editors’ work on the website, expanding, reworking and reorganising some material while adding an entire volume of new entries. The volume is largely made up of 19 sections on individual film directors and producers – Seijun Suzuki, Masato Harada, Kinji Fukasaku and Takeshi Kitano amongst them – then subdivided into breakdowns of their most famous works. The final chapter attempts to catch the notable exclusions of this approach. The volume boasts nothing short of a “groundbreaking and gap-filling insight into the inner workings of the industry and the leading creative minds”, according to the publicity, although most readers will find it far more successful at providing insight into the latter than the former. The film resource/guide genre has proven to be perilous; unable to balance history with analysis, most books of a similar style (especially for horror and cult cinema) suffer from too many omissions to provide an accurate history, or too much history to provide a context. Thankfully, this volume attempts only to produce a series of remarks on recent Japanese cinema and its luminary directors, allowing for a breadth of commentary that satisfies the cinephilic pedant and enthusiast, although never attempting a deeper contribution to scholarship.

Mes and Sharp paint a convincing story of the fall-and-rise of the “new” Japanese cinema, of a daring and visionary generation emerging from the fog of commercialisation and the global gentrification of the imaginary, most notably the collapse of the Japanese film industry in the late 1970s. While more academic accounts of this period have tended to conflate the trajectories of the directors with the mechanics of the industry, here the directors are given individual focus and a rich picture of their roots emerges.

The auteur profiles go beyond a simple historical contextualisation and thankfully dispose of the thin thematic analysis that marks so many film resource books of this type. For the most part, Mes and Sharp use their encyclopedic resources to provoke interest in the lesser-known directors through connections to others, and they generate enough anecdotes concerning the more popular directors to go beyond cinephilia. Interviews with the directors themselves are cultivated to produce a potted history of each; Shinya Tsukamoto’s commentary on the trajectory of the Tetsuo/Bodyhammer films provides an insight into the ambition of the director to revisit the films, despite his move into the subtler territory of Gemini (1999) and A Snake of June (2002). Fragments from an interview reveal that Quentin Tarantino had offered to produce the third chapter in the kinetic cybernihilistic series, which resulted in Tsukamoto losing interest and shelving the project, before musing that if he were to “make Tetsuo III and it’s received very well in the United States, after that [he’d] like to make Alien 5. And then Ridley Scott will come back and make Alien 6 and that would be the final film in the series” (151). One can imagine Tarantino flicking through the pages of precisely this sort of volume, filing each entry under “influence” or “potential remake” as he progresses.

The book takes an uncomplicated approach to the internationalism of some of the directors – a thankful reprieve from the desperate search for meaning behind segments of misspoken English phrases – often letting directors like Tsukamoto provide clues to their relationship to the West, but largely leaving the topic in the realm of the obvious. This confidence is rewarded with some fragments of analysis (although the book is often frustratingly limited in this way) concerning the cultural histories of the directors.

A more critical reader may tire of the love affair Mes and Sharp display for the outsider aesthetics which encompass their subject, and the valentinian deployment of heroic hyperbole – let the phrase “belonging to the last generation of idealists” be henceforth stricken from the public record – although the context is rich enough for this to avoid becoming a distraction. To their vast credit, Mes and Sharp have made some hard decisions in declaring the over- and under-rating of some of the films being examined, adopting an approach less like guides to the naive and more like curators to the fascinated. Sogo Ishii benefits from a wry and understated entry that leaves no doubt as to his position as one of the great workers of the millennial para-genre of total cinema (elsewhere known as punk-rock cinema, or pankku-rakku (no) eega) and of special note is the loving tribute to his 1982 elegy to guitars and fury, Burst City, which finds itself rightfully in the can(n)on of excess. Takashi Miike, about whom Tom Mes has published a similar volume, Agitator (1), has perhaps the richest entry, which touches on a range of the prolific director’s works, from the signature balletic incandescence of Audition (2000), to the black society trilogy which culminates in the vagrant story of Ley Lines (1999), named here as Miike’s most important work.

While the predictable quest for absences produces a handful of titles (the lack of an entry on the near-perfect Wild Zero being a particular sore point for this writer), a dozen profiles on obscure gems emerge for every gap the would-be connoisseur manages to find. Of particular note are the generously harvested illustrations, capturing some chilling grimaces and perfectly poised objects (often people-as-objects), which do as much to render the gestural nature of recent Japanese cinema as the accompanying text.