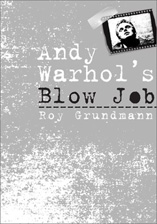 A brief scan of Roy Grundmann’s book on the film Blow Job (Andy Warhol, 1964) brings the reader the promise of future bouts of fascination, intrigue, even stimulation. The conceived “blow job” itself, however, remains elusive – both in cinematic conception and film content. As Grundmann discusses in this incredibly intricate and detailed study of Blow Job – which includes the film’s production background, critical discourse, and original theoretical arguments regarding the film’s implications and placement within a larger cinematic and historical context – what we see on screen is never really what it seems. Or, we ask, does this realisation ultimately really matter?

Warhol remains a figure in cinematic history whose work and background are not only controversial, but seem to border on the inexplicable. Because so much of Warhol’s content revolves around abstraction, the form as a concrete character finds itself the substance for discussion (as the “subject” typically renders itself enigmatic in descriptive terms). Without considering the “pop” artist’s genius in two-dimensional form, the amount of what one can say about any one work in the filmmaker’s oeuvre can only suggest verbal paralysis. Yet here, 228 pages of single-spaced, miniscule text proves less than adequate to encapsulate all that can be said about a short black-and-white film made more than 30 years ago.

The film Blow Job is composed of one long shot that frames a man’s face as he is supposedly receiving oral sex. In determining a proper approach to studying this film, Grundmann seems to have covered everything from underground subcultures to high culture to pop culture, and just about anything in-between, and with due reason. Writing so much about a completely silent 36-minute film serves Grundmann’s purpose of taking as many approaches as possible to the study of what remains an isolated piece of work, despite its mythical status, and a “(pre)dominant text” in underground cinema studies, despite obvious restrictions due to its taboo subject matter.

While similar to the British Film Institute books – each brief volume specifically about one film, and each written by a scholar with proven expertise in the given topic – Andy Warhol’s Blow Job is different on a noticeable level: it seems almost impossible in its use of one short film to address a proliferation of topics without failing on issues of relevance or bordering on reader ridicule. With a delicate sensibility and intricate handling of resources and available material on the topic, the author maintains a careful study of the film and its context within cinema studies and queer/sexuality studies. A Professor of Film Studies at Boston University, Roy Grundmann makes a contribution here to academia with his work whose style is eloquent, humorous, touching, and, at times, deeply personal.

In Chapter 1, “Myths from the Underground,” Grundmann addresses three specific concerns. In the section “The Myth of Reflexivity,” he inspects the formal qualities of Blow Job – mise en scène, lighting, framing. The decisions involved in the production of this one static shot, Grundmann explains, contribute to the film’s relationship to its audience, positioning the viewer as both viewing subject and viewed object – Grundmann alludes to Jonathan Crary and his theories regarding this dual assemblage – and therefore re-mythologising the associations made between imagery and receptor. This re-mythologisation is further discussed in “The Myth of Obscenity,” where the film’s underground status, while still being capable of addressing much larger social issues such as the release of the Kinsey Report or the surfacing of hard-core pornography, is influenced by the censorship present within the film itself. Due to the lack of clarity regarding actual action, location, and people involved, the structure of the film is a signification of Warhol’s self-honoured code of obscenity. All of the ambiguity contributes nothing to the explicit sexual activity, but ends up problematising the related matters of gender and sexual desire. If nothing is defined, how does Blow Job contribute to the underground’s conception of sexuality in film? Finally, in “Framing the Myth – Mythologizing the Frame,” Grundmann considers the conflicting on- and offscreen spaces of the film. Referring to Roland Barthes and Jean Baudrillard, Grundmann argues that Blow Job mobilises and negotiates conflicts within and outside of the frame in the realms of mythical analogy and spectatorial address, but does not resolve them.

Beyond the film’s material and content itself lies the dialectic Blow Job may have with or within popular culture and the underground subculture – a stratification inherent in any Warhol cinematic discussion. In Chapter 2, “Shadows and Myths,” Grundmann explores various visual allusions that Warhol perhaps purposefully employed in the film. The onscreen actor’s likeness to James Dean seems immediate and obvious enough, but there are further links to the popular icons of the teenage rebel, the gangster, and the “suffering martyr” – the image of Christ on the cross. The author accounts for each icon by providing an in-depth historical background and the foundation of each icon’s allegorical significance in art history, high culture studies, American underground cinema, and popular culture. The section on the suffering martyr is especially illuminating: Grundmann’s perspective on the matter is not only sophisticated and articulate, but also applicable to the discourse on the use of Christian imagery in Warhol media, cinema, and art history.

“White Gay Male Identity Between Passing and Posing” (Chapter 3) features subtopics that are basically under the umbrella subject of masculinity and the gay male. Without attempting to tackle the topic of homosexuality head on, Grundmann (as a white gay male himself) embarks upon the subject with a very specific trajectory, focusing specifically on the appropriation of the white, homosexual male image in postwar America. Examined in the light of Blow Job being seen as a product of a gay director’s sensibility – and, ultimately, as a manifestation of Warhol’s own identity – the history of homosexuality as it pertains to the cinema finds its roots in a much larger context of gender construction and psychoanalytic theories (rather than exclusively about homosexuality, avoiding an obvious trap in suggesting that the film is a facetious visual representation of a homosexual act). While Blow Job is not an explicitly homosexual film at all – only the male receiver of the supposed blow job is shown on screen – the questions of authorship and Warhol’s own sexual orientation give this film incredible importance in terms of reception and gendering. Again, the fact that the film is ambiguous with regards to action and cast allows this scholarly approach to take the short work as an inexhaustible basis for a range of applications of theory and film history.

The next two chapters – “Gay Masculinity Between (De)Construction and Demontage” and “Andy Warhol, James Dean, and White Gay Men” – are examinations of larger matters than the single film itself. Referring to arguments made by Leo Bersani, and to the topics of melodrama and gender construction, Grudmann expands this study to cover sexual politics beyond the screen: government, federal and state laws, reception theory and cinematic practices, and so on. In addition, gender as performative discourse – an idea elaborated upon by Judith Butler – enters the discussion, which dismisses gender essentialism in the face of such works as Blow Job. By way of a simulacrum, the film communicates ideas of masculinity by destabilising and questioning gender construction. Does Blow Job actually play a role in white homosexual discourse? Can it? By pointing to the volatility of “natural” gender, Grundmann asserts that the proclamation – or, indeed, the claim to rights – of a certain sexual identity only leads to a re-identification with masculine/feminine and heterosexual/homosexual binaries, which are simply problematic to begin with.

The history and historiography of Warhol’s immortalisation of Dean’s image on paper are yielded to in Chapter 5, where Grundmann poses that the images themselves are self-reflexive; in the production of such iconic imagery of James Dean, the artist interestingly aids identity formation of the viewing subject. Grundmann eloquently comments upon the concepts of race and homosexuality in regard to Blow Job in his concluding chapter, “Darkness as Metaphor.” The uses of imagery – which the author recapitulates from previous chapters, as well as theoretical debates – are grounded in another subcultural realm: the tension between established white masculinity and the “Other” as it pertains to social identity and social positioning. Here, the questions raised are inevitably tagged with calculated suppositions, but we must remember that no satisfying resolution to these conflicts will ever arise from one work alone.

One of the less beneficial features of the publication of this study is the limited availability of such rich information to the general public – Andy Warhol’s Blow Job is a report and analysis so in-depth that the work will likely remain shelved, purposed as a reference book to Warhol scholars and hard-core avant-garde cinema specialists. On the other hand, those in the general field of film studies will most likely view it as an impressive analytical model that encompasses a topic with so much force and coherence that you’d swear you’ve seen the film before, but you’re mistaken. In the end, you would have seen it through Grundmann’s eyes.

Grundmann’s book definitely performs the task of providing a detailed summary and analysis of one film, but it is also capable of giving neophytes an idea of what a work by someone with dedication to and proficiency in the world of cinema studies looks like. As for established scholars, Andy Warhol’s Blow Job will soon surface as a perfectly crafted and elaborate rendering of theoretical application and juggling of sexual discourse. Compositionally precise and stylistically engaging, the book reveals what is consistently needed in cinema studies courses around the world. As a former student, I join many others in saying that Grundmann’s own position as professor at Boston University remains a vital one – in the many courses he teaches, he uncovers for his students concepts, ideas, and various methodologies which should never go undiscovered by any academic aspirer.

Grundmann’s cautious yet comprehensive approach to the film and his use of multiple texts will not only enrich any Warhol discourse; his book also attends to the various approaches in defining sexuality – and, indeed, homosexuality – as a widely problematic academic domain. Andy Warhol’s Blow Job is a valuable contribution, and Grundmann reminds us that there is always more to be said about anything that is seemingly short and simple.