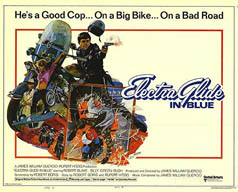 The road … the long winding road … that’s how the film, Electra Glide in Blue begins and ends – with a seemingly endless stretch of Arizona highway. In 1973, James-William Guercio directed this subtle, offbeat work that never gets mentioned except in small blurbs of video guides.

Blue stars Robert Blake as feisty, virile and overcompensating motorcycle highway patrolman John Wintergreen, who longs to do more with his life than tag cars for speeding. When he discovers a homicide, he’s sees a chance at upward mobility.

Boasting cinematographic bravado by director of photography Conrad Hall, the film is full of terrific compositions. Hall captures the desolate Arizona highways and the desperate conditions of communal living, along with nicely played-out action sequences with stylized camera-play. Hall’s skilled photography is one of the main aspects of the film that elevates it above the status of just a plain action/murder-mystery.

Blake’s idiosyncratic performance is another stand out aspect of the film. He is given some excellent dialogue to work with and he works with it wonderfully. When Wintergreen, who is a Vietnam veteran, pulls over a Vietnam veteran trucker for speeding, he tries to play up to Wintegreen’s sensibilities. Blake, giving Wintergreen a matter-of-fact, wry sense of humour, explains that he will do for the trucker what it took someone six months to do for him – nothing. It is moments like this that evoke the anti-hero image that was pervasive in much of 1970’s cinema.

James-William Guercio, a one-time manager for the rock band Chicago, made his directorial debut with this film and composed its score. He skillfully handles the material and his stylized visuals show that he was a director of promise. However, he never made another film. The shifting perspectives, the bending of genres and the uneven tone of the film were marked by critics as an indication of a sloppy and weak structure. But the film’s unevenness is its greatest strength. Within the confines of a genre film, it distorts the conventions making it more of a departure from clichéd, conventional cinema than many art films.

The social elements are evident but not overbearing in Electra-Glide in Blue. In the early 1970s, the Vietnam War was still being waged. The US was fiercely divided between the hippy-counter-culture and the conservative Right. The Kent State massacre, the Watergate scandal and the war all weakened the morale of the nation. The films of the 1970s reflected the ambiguous morality of the era.

Easy Rider (Dennis Hopper, 1969) was one of the first independent counterculture films and was enormously successful. Blue is a kind of anti-Easy Rider. There is even a reference to the 1969 classic, where Blake and his partners take shooting practice with a Dennis Hopper-Peter Fonda poster as target in the film.

Using the structure of a murder mystery, the film reveals more than just conventional mystery plot twists. Blue unpeels layer after layer of its complex characters. While primarily a character study, the film also deals with the struggle for understanding between the tune-in, turn-on, drop-out generation and the older established order represented by the police. However, Wintergreen becomes a force that objectifies the conflict and questions viewer’s sympathies with each group. The resolution of the film is the ultimate twist on the Easy Rider, ending as abruptly and unexpectedly as blazing finale for Wyatt (Fonda) and Billy (Hopper). It is an ending that will stay with the viewer.

Blue maintains a middle-of-the-road objectivity to its subject matter. While exploring social issues, it never gets close enough to its subject matter to preach. However, Wintergreen is a catalyst for exposing the hypocrisy of both establishment and anti-establishment values. Blake’s character is quirky but steadfast and by-the-book, while his partner is small-minded and corrupt. When Wintergreen achieves a promotion to homicide detective, he begins to see that things are not what they seem and he learns some hard lessons about humanity. This is done in such a way as to seem detached.

Another film of the 1970s that seeks to explore the strained relations between hippies and squares is John Avildsen’s Joe (1970). The film, which stars Peter Boyle as the title character, acts as an indictment of Right-Wing conservatives and their intolerance. Blue is more subtle and executed with a less-political slant.

The answer to the murder-mystery is inconsequential in Electra-Glide in Blue. Blake’s character explains that it was an act of loneliness and states that: “Loneliness can kill you deader than a .357 Magnum.” The murder is only important because it sets off a chain of events, primarily the self-discovery and ultimate demise of John Wintergreen.

Electra-Glide in Blue is an overlooked film that reveals its ambiguous morality in subtle ways similar to other films of the decade, such as The King of Marvin Gardens (Bob Rafelson, 1972) and The Conversation (Francis Ford Coppola, 1974). This is obviously not standard cops and robbers fare and it rarely follows convention. It is clear that the film deserves to be on the map with the other efforts of quintessential ’70s cinema.