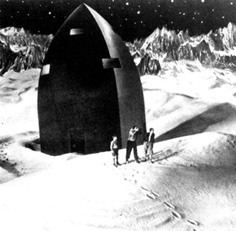 The first intertitle proclamation of Fritz Lang’s often-overlooked silent epic – “I believe that the moon is rich in gold!” – signals the gleeful intertwining of space travel, melodrama, and special effects that constitute this fantasy spectacle. Lang’s film is simply great fun, but sandwiched between his more notorious Metropolis (1926) – which nearly bankrupted Germany’s state-financed studio, Ufa, in its wild overflowing clatter of set design – and his restrained sound masterpiece, M (1931), it tends to be left out of all but the most comprehensive retrospectives. A stubbornly silent film released into the burgeoning sound era (not released in the United States until 1931), its story arrives complete with all the trappings of a soap opera. An accidental gunshot pierces an oxygen tank on a rocket named after the woman its pilot loves, who is in fact engaged to the pilot’s business partner and engineer – all three are on the journey, together on the moon. This interplanetary love triangle wallows delightfully in last-minute rescues, multiple near-death scenarios, a daring Germanic hero built like Tarzan, a morally filthy American venture capitalist, a near-senile pointy-bearded professor, and a feisty child stowaway.

Historically, film scholars and military officials alike praised Woman in the Moon for its startling accuracy of vision. Lang consulted closely with Germany’s leading rocketry expert, Hermann Oberth, and together they visually replicated the rocket described in Oberth’s influential book, Rocket into Interplanetary Space. 40 years prior to the United States’ Apollo 11 lunar landing, Lang’s and Oberth’s predictions as to what such an expedition would require hold amazing scientific legitimacy, lending technical and therefore psychological weight to the film’s lengthy proceedings. Their rocket correctly requires a significant escape velocity in order to free itself from the Earth’s orbit, so the film envisions a multiple-stage booster system with a fin stabilisation design for the rocket’s base. Liquid fuel propels the rocket, which once in space gives us cinema’s first depiction of a crew floating in zero gravity. Before the launch, a media frenzy descends upon the area – Lang correctly imagines the first attempted lunar landing as a worldwide attraction. And when the rocket lands on the moon, the crew encounters lower gravity as they venture out onto the surface.

But Lang’s most stunningly prescient dramatic development was his invention of the countdown to precede the launch. Previous rockets in films, novels, and comic strips either used count-ups (i.e., “1, 2, 3 – Go!”) or no numerical introduction at all. Today, of course, mission controls at space programs around the world employ countdowns for every launch, from weather satellites to manned extra-orbital missions. Lang’s film, based on its scientific legwork, technically outpaces all other early cinematic and novelistic representations of space travel – of Georges Méliès, Jules Verne, H.G. Wells – in which an elementary oversized gun or ramp shoots the rocket straight towards the moon. Woman in the Moon‘s launch sequence, with its extended travelling shots and visual comparisons between the size of humans, the rocket, and the expectant moon, ranks high in the pantheon of memorable thrilling scenes Lang’s career.

Ever formally innovative, Lang developed intertitles for Woman in the Moon that occasionally break free from straight text and enliven the emotional effects of a moment. When, for example, the countdown numbers flicker on the screen, they rush towards us, each subsequent number growing in size, visualising the tension palpable as the point of no return approaches. And when the gold is in fact discovered in the moon, “GOLD GOLD GOLD” explodes out from over the image of the caves, rushing towards the screen, handwritten and angular.

Of course, Lang and Oberth do not always succeed. In fact, there are some shocking technical miscalculations in the film, but these are suspiciously beneficial to the plot, such as the primary fantasy conceit that the moon bursts with gold ready for harvest. Professor Manfeldt (Klaus Pohl), the theoretician behind the journey, locates this gold by using a divining rod which draws him to the damp, nugget-ridden terrain of the moon’s jagged caves! And we all know that today’s astronauts do not have the luxury of helmetless breathing on a moonscape rich with an oxygenated atmosphere.

As part of the film’s publicity, Oberth and his teenage assistant, Werner von Braun, intended to launch an actual rocket to coincide with the film’s Ufa Palace premiere. Though this launch never came to fruition, the two men had long careers in international rocketry: they both went on to become part of Hitler’s V-2 rocket program. When the German military began to develop its program in earnest, the military police confiscated Lang’s scale models, diagrams, and even film prints, treating them all as secrets of the state. (Lang had previously donated all of these elements to the Verein fur Raumschiffarht Rocket Society.) Oberth also went on to technically advise the United States’ first real cinematic prediction of a lunar landing, Destination Moon (1950), which predicted the use of a nuclear-powered rocket.

Thematically, Woman in the Moon provides another setting for Lang to explore his obsession with the slowly escalating, very German brand of paranoia that threatens to detonate at any moment in almost any scene across his oeuvre. The length of the film contributes to this desperate waiting effect, as do the sparse interior of the rocket’s cabin and the bleak plains of the moonscape (both of which prefigure the taut voids of the streets from M). Note how blinking control panels and complex motherboards are minimised in the cabin in favour of blank walls on which rest – like nooses in the background of a shot – the shadows of hanging hand supports. Each person in the group suspects another of something, but once they all leave Germany, leave the Earth, they’re completely reliant on each other.

Woman in the Moon has a history of travelling the globe in myriad tattered versions. There are “Americanised” release versions that have been hacked to 90 or 95 minutes, and there are extant versions that run 108, 146, and even 162 minutes. In each version, though, Lang’s handling of psychological tension declares this film worthy of critical re-evaluation and re-appraisal.