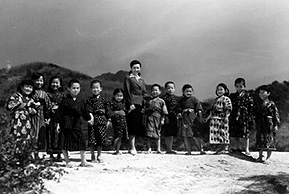 Keisuke Kinoshita was one of the most prolific postwar directors at Shochiku’s Ofuna studios, producing 42 films in 23 years, and then going on to a career in television. He served a long apprenticeship as a cinematographer and as an assistant to senior Shochiku director Yasujiro Shimazu before he was allowed to direct his own films. As regular members of his production team, he employed his brother Chuji, a musician, and his brother-in-law Hiroshi Kusuda, a cinematographer, and together they formed a very active and creative family team.

Kinoshita is noted for his films about the suffering of women, especially mothers, and the strong performances of female stars in them. Kinuyo Tanaka, Yoshiko Kuga, Haruko Sugimura and Mariko Okada all gave great performances in his films but it was Hideko Takamine, who also starred in many of Naruse’s postwar masterpieces, whose name was most commonly linked with his.

In the late 1940s and early 1950s, Kinoshita made some biting social protest films attacking feudal attitudes to marriage and education in prewar and wartime Japan – including a powerful film set in a girls’ school, a sort of Japanese Mädchen in Uniform (Leontine Sagan, 1931). He experimented with a variety of dramatic and visual styles, and achieved success with comedies as well as melodramas. Towards the end of the war, he made a disturbing film out of an unsettling mixture of nationalist polemics, documentary material and women’s melodrama (Army, 1944); in 1951 he made a popular comedy starring Takamine as a Tokyo stripper who shocks her country family when she goes home for a visit (Carmen Comes Home); in 1953 he made a full-blown maternal melodrama punctuated by insertions of newsreel footage (A Japanese Tragedy); while in 1958 he made a highly stylised theatrical version of The Ballad of Narayama starring Kinuyo Tanaka. Despite this active and fruitful experimentation with different genres and styles, one can note that, after the end of the Occupation, his movies generally became more picturesque and lyrical.

Twenty-Four Eyes is an adaptation of a novel by the female writer Sakae Tsuboi. Set in a picturesque island in the Inland Sea, and covering a 20-year time span embracing prewar, wartime and early postwar Japan, it centres on the relationship between a primary school teacher and the 12 island children in her first class. (The 12 children explain the 24 eyes of the title). In the course of the film, she faces problems of acceptance by the children and their parents, then ideological criticism from the educational authorities, then wartime privations and losses in her family and among her pupils. The hardships of the young girls in her class, forced by economic privation and/or death of their parents to leave school and support their families, are stressed; as is the destiny of the young boys to become cannon fodder. The film concludes with a tearful reunion between the bereaved teacher and her original pupils, whose ranks are sadly depleted by the suffering of the past decade.

The film evinces a characteristic attitude towards World War II among the Japanese – an attitude of sorrow rather than remorse. In the early years of the Occupation, the Japanese cinema briefly gave voice to anger and protest against the sins of prewar and wartime leaders, who had “misled” the nation, but by the 1950s this attitude had given way to a more amorphous wallowing in sorrow and a general feeling of victimhood. Made soon after the end of the Occupation, when memories of the war were still fresh, Twenty Four Eyes functioned both as a symptom of these prevalent attitudes and an aid to their consolidation; it was welcomed by domestic audiences, giving them the opportunity to indulge in mourning. The film was not only a popular one, it also garnered the award of Best Film of the year from the national film critics. When you consider that 1954 was a year of prodigious achievements in the Japanese cinema – the year of Mizoguchi’s Sansho Dayu and Crucified Lovers, Naruse’s Late Chrysanthemums and Kurosawa’s Seven Samurai – it was an astounding coup for Kinoshita. (The Garden of Women, a potently disturbing women’s melodrama directed by Kinoshita earlier in the same year, was awarded second place in the Best Ten list.) It appears the critics, as well as the public, responded to a certain Zeitgeist in which a soft and diffused backward look on their own recent past was more highly valued than masterful accomplishments in the period film and the women’s melodrama.

Twenty Four Eyes remained a favorite with Japanese audiences for decades after its production. Its use of music and cinematography alone is conducive to an indulgence in nostalgia. The film is punctuated with choruses of well-known children’s songs, appealing to the Japanese audience’s sentimental memories of their own childhood; and, for modern urban Japanese, the picturesque island setting with its small old-fashioned village community arouses nostalgia for the furusato, the old home town, where life was simpler if more arduous, apparently timeless and changeless. Both triggers of nostalgia, childhood and furusato, are brought together in the children’s song “Furusato”, sung repeatedly during the film.

The heroine, Miss Oishi, played by Takamine, is a teacher who is modern in dress and educational practice but also very maternal towards her pupils as well as being a mother herself. She voices some critical opinions, but these had become commonplace in postwar Japan, given the benefit of hindsight. Even in the prewar setting, she is not threatening; on the contrary, she is supremely comforting, a loving and loyal friend to her past pupils, and fellow sufferer in the trials and tribulations of the times they live through. She may be more educated and middle class than they are but that does not make her exempt from suffering and loss. She, like the villagers, suffers wartime privation and loss of a child and a husband. They are all scarred and aged by the war. As in wartime ideology, the Japanese are represented as more united than divided. Differences of class, gender and even political opinion are finally rendered less important than a common experience of suffering. The audience is invited to empathise with Miss Oishi and her pupils, and to shed copious tears (1).