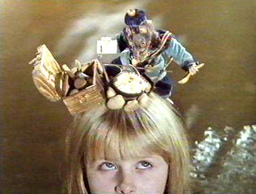 This is an abridged version of a longer article.

And if you go chasing rabbits
And you know you’re going to fall
Tell ’em a hookah-smoking caterpillar
Has given you the call.
Call Alice
When she was just small.

Carroll is an illustration of the fact that children are better understood by pedophiliacs than by pedagogues.

Alice is an 86-minute film, a 125,000-frame puzzle, and a meticulously constructed infantile dream. Jan Svankmajer has stated that he considers his childhood an equal partner in his life, a place easily and continually revisited: ”Childhood is my alter-ego.” (3) As articulated in his art, Svankmajer’s is not a nostalgic or distant childhood but an unsettling one saturated by a harassing malevolence, with puppet characters imbued with a disturbing ambiguity suspended between a static innocence and a moving, stalking dread.

At the time Grace Slick was contemplating the lyrics for her anthem for the drug counter-culture in the West, Svankmajer’s ‘Iron Curtain’ East was a vastly different place, more likely to achieve its political goals through coercion than entertainment and distraction. In an article about his latest feature Little Otik (2001), Svankmajer outlined his experience with LSD and talked about his belief in the creative act as “autotherapy,” a means to help him gain respite from the demons that have plagued him since childhood. (4) As well as artistic creativity, Svankmajer states that he also sees erotic love as another such path to liberation.

Swankmajer’s experience with LSD in 1972 was as a volunteer for research in a military hospital in Prague, curing him of seeing drug experimentation as another path of liberation. Initially, he felt a “regression to infancy and a feeling of utter helplessness.” (5) Later, he became seized with panic and fear as he was allowed to walk around the room, rushing around corridors trying to get out until he was finally sedated and placed in a padded cell till the morning. At one point, he also felt as if he was drowning.

This experience led to anxiety attacks for years after. For example, he was unable to ride on trams at night because the static reflection of the tram’s interior meshed with the moving exterior. This “crossover of dual realities” would trigger the initial disintegrating feeling he had felt at the onset of taking the drug. Such images recall the visual layering pursued by other film artists in their work: Castro Street (Bruce Baillie, USA, 1966), Glimmer (Paine/Liddel, UK, 2001), and Watersmith (Will Hindle, USA, 1969). For Svankmajer, it seems, LSD focused and invoked those demons of childhood rather than liberated him from them.

Many anxieties are invoked in Alice, offering a virtual shopping list for the hypochondriac: of being plunged under ground, chased by inanimate objects, lost, judged, disoriented by place and or logic/illogic, late for an appointment, and of spoiling the bed.

For Svankmajer, Carroll’s Alice is a place from which to rework the memories, images and fears of his own childhood. His wonderland is much more visual and tactile than Carroll’s. As you would expect, Carroll’s wordplays are generally displaced. Svankmajer’s is a much more contemporary world of cut-up, collaged material, as well as in terms of the feelings it explores. Gone is Carroll’s vision of Alice as a perfect English upper-class girl, who through her refinement and her bossy natural superiority protects herself from this topsy-turvy world. Svankmajer’s world, here as in his other films, is more inherently fearful, where everyday objects, the tools of our comfort, are capable of turning on us. It is a world that an ‘innocent’ Alice negotiates, sifts through, inspects.

In the English language version of Alice there is also the added displacement of the overdubbing of the Czech voice. In a moment of self-reflexivity, Alice begins to relate the story of ‘Alice’ after she tells us we are about to see a film. As a narrative device the rest of the film is then intermittently punctuated with sync sound close-ups of Alice’s talking mouth, overdubbed in English. This is both personal and ominous. This further act of translation has cut up the film even more. Would Svankmajer, in the tradition of Duchamp, approve?

Svankmajer’s mark on film culture is significant. The Tim Burton produced, The Nightmare Before Christmas (1993), and David Lynch’s Eraserhead (1978) have been suggested as connected works. Toy Story (John Lasseter, 1995) can also be compared in terms of its appropriation of found objects brought to life. Nevertheless, there is something much darker about Alice’s inner odyssey compared to the plastic adventure and sheen of the inventive animated objects of the digitally animated Toy Story. Toy Story is about plastic objects found in a plastic toy box at the foot of the bed, whereas Svankmajer’s materials are more likely to be found discarded and forgotten on the nature-strip for a council refuse collection. (Often the creation of such piles of ‘rubbish’ can be considered as a cathartic process in itself, as can its gleaning by others).

Svankmajer’s objects have their own interior life, promoting a philosophy of self worth and inherent self-awareness in his puppets. The difference between the ‘objects’ in Alice and Toy Story, is comparable to the difference between sanitized plastic and rotting sawdust. Alice is about the organic, the cellular; for example, the sawdust leaking out of the rabbit’s body that is continually, ritualistically wiped off its timepiece.

Though Svankmajer constructs his world out of the rubble of the past, an act of which Walter Benjamin would approve, his work speaks in an empowering Present. It is about recognizing and reconstituting a dark anxious past, rather than being in total denial of it.

The film finishes in a garden shed strewn with objects that are now as dead as a doornail. Alice’s mind goes through the panic rush of a stream of characters, a stream of selves, a sifting, a sorting, perhaps even a last gasp. Is she an adult now? And what traces, what anxieties will Svankmajer’s Alice carry with her into adulthood? How many forays back to the scene of the crime will she have to make, to make sense of it all? Will the adult Alice get to the point of thinking, wishing that the objects of her childhood could talk, reveal their secrets to her, tell her what they have witnessed? Will she have time?

Among all the things of this world,
information is the hardest to guard,
since it can be stolen without removing it.