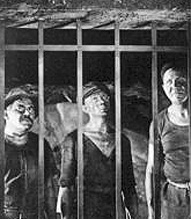 For all the reverential bows in its direction, pacifism has had a rough ride in the cinema. Cruelty and violence weather the years far better, for even their most fantastic incarnations seem closer to the reality of our cruel and violent times. “Cruelty was on the ‘good side’”, says Serge Daney. “It was cruelty that said no to academic ‘illustration’ and destroyed the hypocritical feelings of a wordy humanism” (1). Haunted by the shadow of naiveté, even uselessness, the aesthetic qualities of the pacifist cinema often suffered apace with its evident futility in the face of real-life horrors. La Grande Illusion (1937) alone, perhaps, exists to this day with its artistic reputation intact, while a film such as Lewis Milestone’s All Quiet on the Western Front (1930) is little more than an essential but stodgy footnote in film history, sinking in the seas of critical regard with its League of Nations peace medal clutched in hand.

Much the same has happened to the second winner of that patently ironic decoration, G.W. Pabst’s Kameradschaft. Drawing inspiration from the Courrières mine disaster of 1906, during which German miners violated the border to rescue their trapped French counterparts, Pabst updated the event to the post-war period and relocated it in Lorraine, one of the sorest and most hotly disputed regions on the Franco-German border. The symbolism was transparent, and thus effective. Kameradschaft received the requisite acclaim for a humanitarian film by a major director, was awarded that fateful medal – and quickly passed into irrelevance as the National Socialists seized control of the Reichstag in 1932 and went about heightening (if such a mild word can suffice) those very divisions which Pabst had hoped might be eradicated.

And so Kameradschaft has faded into relative neglect, passing nods to its technical accomplishment superseded by thinly veiled contempt, such as David Thomson’s curt dismissal of the film’s humanitarianism as “facile” (2) or the more scholarly circumlocutions of Russell Berman, who sees in every facet of the film a failure of revolutionary promise and a virtual paving of the way for the ravages of Nazism. “If the solidarity of 1906 could not prevent 1914, why should the viewer in 1931 trust an unreflected repetition of that solidarity to prevent a new war?” Berman asks; a kind of guilt by association which implies that hope is only legitimate insofar as it yields concrete results. (4)

Undoubtedly, the maker of a pacifist film bears a profound responsibility – not to ensure that world events conform to his ideals, but that his artistry holds fast to the truths which give those ideals relevance. Pabst can certainly be faulted for not pressing far enough into perhaps the most crucial issue of his scenario: in this film about proletarian solidarity there is hardly a mention of class conflict, as if Pabst were unwilling to sully his paean to international brotherhood with the dirty facts of economic exploitation. This hesitancy adds something of a hollow ring to the otherwise moving speech at the film’s end, when the French orator decries “our two enemies: Gas and War!” – with not a hint as to what birthed those enemies, with hardly an accusing finger pointed towards the seats of power. The dilution continues with the oft-excised final scene of French and German officials resealing the underground frontier which the German miners had broken through to aid in the rescue, Pabst’s dark irony sapped of its power by the film’s preceding circumspection.

While drawing attention to these faults, however, the great, short-lived Depression-era critic Harry Alan Potamkin – no mean Marxist – nevertheless praised Kameradschaft as a major progression for both Pabst and the cinema itself: “It is a picture not more than pacifistic, it does not assail or divulge causes, but its pacifism is [neither] flamboyant nor self-delusive; it is on its way to an acute attack upon the war makers.” (4) Profoundly affected by Dreyer’s The Passion of Joan of Arc (1928), finding in it “if not the historic social base, at least a maximum intensity of conscience and intensiveness of treatment”, (5) Pabst with Kameradschaft honed his technical mastery – that “X-ray camera eye” which had adorned the erotic dream worlds of Pandora’s Box (1929) and Diary of a Lost Girl (1929) with exquisitely dispassionate detail – into a moral instrument stripped of either locked-in rhetoric or detached aestheticism. “Pabst is never oratorical in his portrayal of the human element in the rescue, never colossal in his depiction of the mechanics of the rescue”, says Potamkin. “He is always close to the ethical fiber of the event, and from this steadfastness emanates the artistry.” (6) Though concerned that the film is “too empirical – does not develop its social tendency,” (7) Potamkin concludes that “Kameradschaft, because it re-establishes the cinema on the firm ground of the concrete record of an event of mass-reference, and that outside the land of the proletarian rule, is of mighty significance.” (8)

Though he never lived to see what would become of his beloved land of proletarian rule, the ensuing monstrousness of Stalin’s purges no more de-legitimises Potamkin’s searing insight than the rise of Hitler’s Germany diminishes the depth of Kameradschaft‘s artistry. Ultimately, socially progressive art is answerable only to that part of it which is least social and least progressive: the art itself, which can lift the social and the progressive beyond platitude, can illuminate them within their full human dimension. On this score, Kameradschaft merits the value with which Potamkin invests it, not least because its humanism is linked so indissolubly – and so improbably – with its technical achievement. Seldom do the two manage to coexist in equal measure – “a triumph of art over humanity,” Robert Warshow famously labeled the Soviet cinema from which Pabst drew evident inspiration (9) – yet in the case of Kameradschaft, the astonishing skill of its making is wholly attuned to its moral purpose. Far from the “opportunism” bizarrely charged by Thomson, Pabst’s combination of location shooting at real mining towns with an enormous and minutely detailed mine set constructed by Erno Metzner and Karl Vollbrecht (10) allows him to transcend both the pieties of documentary purism and the jewel-box effects of studio fabrication, to yoke actuality and recreation into a crystalline artistic whole. “Ethical, not esthetic values make up the significance of this film,” claimed Pabst, but it is the film’s aesthetic values which give its ethical being such vivid, affecting life. (11)

Like Antonioni’s in Red Desert (1964), Pabst’s striking visual treatment of the industrial landscape is his means of exploring how human beings inhabit these spaces, how they have adapted to the strange new environments they have constructed for themselves. By marshaling his masterful command of his medium to recreate the physical and mechanical environment of his tale, Pabst heightens the human element within that environment – he roots his parable in the rhythms and processes of proletarian life, as and how it is lived. The gliding, near-weightless freedom of Pabst’s camera both above- and below-ground employs absolute precision to evoke a breathtaking spontaneity; here, Godard’s famous dictum about tracking shots constituting a moral issue comes down on the side of the just. The workings of the mine, captured in subtly sweeping movements; the terrifying explosion which sends the black-faced miners running in terror towards the camera, traveling backwards to reveal intersecting tunnels and streams of fleeing men; the shots from a moving train as the town’s populace start running en masse towards the works, crowds flowing out of shops and restaurants and into the streets; tracking past the mine’s main gate, behind which desperate women grasp the bars and cry to be let in; perhaps most spectacularly, the blockhouse of the German miners, where pulleys ascend to the cavernous ceiling bearing laundered work clothes and the camera cranes down to move through the massive communal showers. Rather than simply relying on the airtight perfection of his scenario or the set-piece mentality of the Soviet directors, Pabst transforms his parable into a series of mini-epiphanies, the essence of each moment brought forth in full illumination before receding to rejoin the greater stream. Even when Pabst feels the need to italicise, such as the zoom into close-up of the handshake between a French and German rescuer as their squads meet in the mine, the inherent power of the moment surpasses the unfortunate presentation: anonymous behind their gas-masks, the “cubist men” of World War I here join in the preservation of life rather than its destruction.

Like his film, Pabst himself fell victim to poor timing. After leaving Germany for France and then the United States in 1933, he later returned to Austria citing family reasons; when war again broke out, he found himself unable to leave and compelled to make films for the Nazi studios in order to keep working. He would never again attain his former peak of success, and his reputation would always remain tarnished by his wartime collaboration, whatever the circumstances may have been. Kameradschaft would be Pabst’s last great achievement, but its explicit social concern and fervent optimism would distance it from the purely aesthetic refuge of his films with Louise Brooks, or the cultural benchmark of his collaboration with Brecht on The Threepenny Opera (1931). But inadequate and compromised as it is, Kameradschaft shows Pabst at the height of his powers, and no longer content to hide behind them. “I am through with the social film”, (12) he reportedly said after completing the film, but the erratic social commitment of this erratic filmmaker here yields a pacifist cinema worthy of Renoir. The humanism of Kameradschaft is writ in images rather than words, in faces and bodies and that which surrounds them; not illustration, but the living matter of hope, finding embodiment on the screen at a time when it could secure little place in the world.