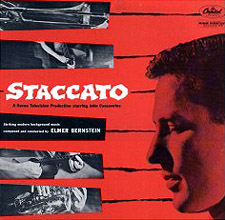 In the late 1950s, John Cassavetes had achieved a moderate degree of fame as a television actor during the short-lived period of what is now often referred to as the “Golden Age” of American television, defined by the live anthology-drama format produced in New York City. TV Guide, for example, profiled him a number of times, once as a “Potential Valentino” (1), and he had found a supporter in gossip columnist Hedda Hopper, who included a segment featuring Cassavetes on the Johnny Staccato set in a television special (2). It was his name-recognition that attracted many fledgling actors to a workshop he set up with Burt Lane (father of actress Diane Lane), which became the staging ground for his directing debut, and landmark of American independent cinema, Shadows (1959). Although many of his students complained that Cassavetes failed to secure any high-profile auditions with producers, the beginnings of Cassavetes’ theatrical troupe model in his filmmaking practice begin to emerge on Johnny Staccato, as he managed to get some of his friends guest roles on the show. A number of faces from Shadows appear in guest roles throughout the series, such as Lelia Goldoni, Tom Allen, Rupert Crosse, and Maurice McEndree, with Dennis Sallas having a semi-regular, although minor, role as a bartender. Other Cassavetes regulars Gena Rowlands and Val Avery also made appearances on the show, as did John Marley (Faces [John Cassavetes, 1968]) and Paul Stewart (Opening Night [John Cassavetes, 1977]).

Cassavetes took the starring role on this regular series partly to offset the costs of the partly self-financed Shadows. When the television industry moved from New York and the live, theatre-based broadcast format shifted to Los Angeles and filmed programming, Cassavetes also moved, continuing work in television and B-movies while embarking on his directing career. Erik Barnouw, in his seminal history of broadcasting, cited Johnny Staccato as an example of a new trend of the Hollywood-based filmed action series, symptomatic of, besides the decline of the live drama, the tightening grip of sponsors over content and hopes of distracting viewers from the payola and quiz-show scandals of the time (3). The producers attempted, however, to evoke the sensibility of the live anthology shows, with the New York bohemian setting and sometimes quotidian narratives. Cassavetes plays Johnny Staccato, a mediocre jazz pianist who has turned private detective, his base of operations being a coffee-house/jazz bar named Waldo’s, located in the heart of Greenwich Village.

The fourth episode in the series, “The Shop of the Four Winds” (first aired October 1, 1959, on the NBC Television Network), is an example of Johnny’s frequent adventures into the diverse neighbourhoods of New York City. Besides the beat culture in his home base of the Village, in many episodes Staccato is swept up by the four winds of New York City, that is: Westside, Eastside, Uptown, and Downtown. A man about town, he has connections, for example, in the German immigrant community on the Lower East Side, Spanish Harlem, Tin Pan Alley, the Uptown social set, and even in a fanatical anti-Communist suburb. This episode begins with Johnny waiting at Waldo’s for a Japanese friend, who has some important information that he never gets a chance to deliver – he is dropped off on the sidewalk, apparently beaten to death. Johnny heads off to Little Tokyo, introducing the area in a sort of swinging hard-boiled detective voice-over, as he does in most episodes, to get some answers.

The disenchanted, burnt out character of the Korean War veteran – the Manchurian candidate type – frequently appeared in sociologically-based television dramas in the 1950s. Cassavetes, the jaded New Yorker occasionally likened to James Dean, was often typecast as a troubled vet or juvenile delinquent character in his early years. As in a later episode, “The Return” (first aired on December 17, 1959), when a vet escapes from a mental hospital seeking vengeance to assuage that great fear of soldiers – that their wives back home are cheating on them – Johnny’s veteran identity comes into play here, serving to explain how he has Japanese friends, as well as his knowledge of judo. In one of the rare occasions when Johnny is wearing something besides the beat uniform of a black suit, he spars in a dojo with an old friend, who gives him the classic line of a mystery set in the exotic Orient – don’t look for the answers (e.g., “Forget it, Jake, it’s Chinatown”). This episode then reminds me of a similar one much later on Miami Vice, when Lieutenant Castillo’s knowledge of Japanese culture is surprisingly revealed, as, also a war veteran, he visits an old Japanese friend, who tells him, over a judo match, to cease his investigation into drug smuggling in Miami’s Little Tokyo. But back in the late 1950s, Johnny’s investigation reveals the smuggling of artefacts and illegal immigrants. The ringleader turns out to be an old acquaintance of Johnny’s from the war, played by Don Gordon, who excelled in playing sleazy types (for example, a corrupt cop in The Mack [Michael Campus, 1973], or Steve McQueen’s partner in Bullitt [Peter Yates, 1968]). But what Johnny was really not prepared to discover is the muscle of the operation, a huge Frankenstein or Golem-like Japanese man, who cannot speak and crushes people with his bare hands.

Cassavetes received, at least at the outset of the series, some artistic control over the show, relatively unheard of at the time for an actor. He participated in story development and directed a number of the episodes. But when a controversial episode on drug addiction was pulled, Cassavetes had finally had enough and proceeded to criticise the sponsors and the production company in the press in order to get out of his contract. Johnny Staccato is not Cassavetes’ best television work, nor is “The Shop of the Four Winds” the best episode in the series. Yet it retains a few traits that distinguish the series from other detective shows, with the basic, almost amateurish plot and moments of relative tranquillity in the teahouse scene. The clichéd background music using a traditional Japanese tune even suggests a tragic portrayal of the exploited immigrants. The story ends, as a few other episodes also do, atop a tenement rooftop: a locale that, although shot on a Hollywood studio set, could only be in New York.