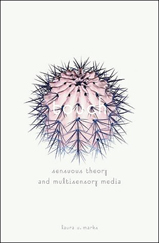 In the opening paragraph of the opening essay of Touch: Sensuous Theory and Multisensory Media Laura Marks describes the experience of watching a marginal, unknown Pixelvision videotape – “It Wasn’t Love” by Sadie Benning:

Not much happens in this story. Its most arresting moment is when Benning slowly sucks her thumb, inches away from the unfocusable, low-resolution camera. Yet watching the tape feels like going on a journey into states of erotic being: the longing for intimacy with another; the painful and arousing awareness that she is so close to me yet distinct; being drawn into a rapport with the other where I lose the sense of my own boundaries; and the uncanny loss of proportion where big things slip beyond the horizon of my awareness while small events are arenas for a universe of feeling (p. 1).

This description sets the stage for a collection of essays which leave an overwhelming impression of eroticism. Marks’ essays trace the contours of a number of non-mainstream media works, developing a unique critical approach centring on the notion of “haptic” visuality. Although a number of the works examined include pornography, the eroticism derives more from Marks’ approach itself; from a voice which sounds genuinely “new” in its candid, personal response. There is something immediately seductive about this mode.

At this opening point, before Marks’ haptic theory is introduced in any detail, this individual reading of Benning’s video seems to give license to abandon oneself to cinephilia: to those films which one simply loves without constructive reason – the films there is just “something about”, that get under the skin. The personal approach to criticism introduced through “It Wasn’t Love” triggers a personal response; the reader drifts from the text for a moment to dwell upon the films that provoke that wordless, theory-less connection.

The genesis of Marks’ argument regarding film theory itself, however, is contained in her opening piece, “Video Haptics and Erotics”. Building upon the work done in her earlier book, The Skin of the Film, Marks contrasts “haptic” visuality with optical visuality (a seeing which masters and represents). Following from the concept of haptic perception as tactile, kinaesthetic and proprioceptive functions, in haptic visuality the eyes themselves function like organs of touch. Rather than identifying with the image the viewer’s gaze rests on the surface of the screen with a certain plasticity – more inclined to engage with its texture than focus on the figures. The non-mainstream works examined by Marks invite this haptic appreciation by being overwhelmingly “unpolished”: they are experimental works mostly shot on video or even Pixelvision – grainy, low-resolution images which are literally hard to make out. The works rely upon the engagement of the viewer in working to constitute the image – to bring it forward and not to simply observe it passively as pre-given.

The contrast between “optical” and “haptic” is maintained throughout Marks’ essays along with other repeated sets of terms: surface not depth, indicate not represent, closeness not separateness. Marks is particularly fond of Peirce’s Firstness and Thirdness, or the distinction between the closeness of perception and the distance of symbolic representation. The reification of the former terms in these sets seems to put Marks squarely within the (French) school of twentieth century thought which denigrates vision. But, following Deleuze and Guattari in their conception of the continuum the terms exist upon, Marks claims her objective is to “restore a flow between the haptic and the optical that our culture is currently lacking” (p. xiii).

Part of Marks’ strategy in restoring this flow is to restore to film theory a relationship with filmmaking practice, something she identifies in the classical film theory of Eisenstein, Vertov and Bazin. For these critics, theory is derived from film practice itself rather than imposed on films as an external, distant framework. Similarly Marks’ approach is not to project a reading upon a film through a lens of theory but to coax from the very film itself a new mode of reading: unidentifiable, non-linguistic and non-representational. It’s no surprise then that the most consistent theme across the essays is the question of identification. In haptic visuality the viewer’s gaze does not engage symbolically to identify or master the image on screen but creates a tactile space of intersubjectivity between viewer and screen.

In this way Marks stakes out a theoretical position firmly opposed to the Lacanian psychoanalytic theory of subjectivity which dominates film theory still. Marks instead relies upon a phenomenological notion of “embodied spectatorship” which she derives largely from Vivian Sobchack’s The Address of the Eye. This presupposes a belief in an anchored, perceiving subject in the world – a subject which does have a centre, unlike the Lacanian subject which can only ever represent a void. The essays in Touch examine the intersubjective space of spectatorship but this space itself is reliant upon the perceiving subject – not to master and understand what is on screen, admittedly, but to engage with the tactility of the image, precisely to perceive.

For Marks, discovering Sobchack was a kind of revelation – “I vividly remember the thrill of recognition I had, sitting under a tree … reading Vivian Sobchack’s The Address of the Eye” (p. xix). Theory for Marks, like her relation to the works she discusses, is personal; the dialogue she creates across these essays is overwhelmingly subjective and experiential. In the book’s last section she takes this approach to the extreme and examines ten of her own dreams, claiming her unconscious accurately charts developments in the experimental media scene over the last ten years. One dream describes Marks attending a party at Deleuze’s house – her “hero”. Marks does refer to Deleuze throughout the book, and, as mentioned, her whole project derives from Deleuze (and Guattari) in its aim of restoring the flow between optic and haptic, not simply to elevating the latter as ideal. Marks, however, departs from Deleuze in two critical ways in these essays – both of which seem surprising given her heroic evaluation of him and his thinking.

On one hand Marks does present a viably Deleuzian model, underlined by the fact that Deleuze does refer at least once to a “haptique” look in his own writing on cinema. In the Cinema books Deleuze prefigures Marks’ strategy, developing an epic example of gleaning theory from cinema and not imposing a model upon it. This example rests upon the rejection of the concept of cinema as utterance, as language. All we have, he argues, is the cinematographic images themselves – pure movement. These cannot be explained through any existing linguistics but can only give rise to an invented system of signs which correspond to each type of image. For Deleuze, film theory must inevitably be both cinephilic and tautological – the inventive vocabulary of The Movement-Image and The Time-Image comes from cinema so has no need or desire to explain cinema. There is a clear emphasis on the tautological and the cinephilic in Marks’ work also – she inherits from Deleuze a privileging of the work itself outside of language and existing theoretical frameworks.

Deleuze, however, genuinely privileges the cinematic work beyond any conception of subject or object. His foundational theory is the plane of immanence – the infinite set of all images where, simply, IMAGE = MOVEMENT. The image exists in itself as matter, not as a sign for matter which is hidden behind the image. For Deleuze, following Bergson, consciousness is on the outside or surface of things, rendering the image and the “thing” indistinguishable (1). Marks, despite her concern with the surface of the image, relies upon the phenomenological subject to perceive this surface and thereby bring into being the notion of embodied spectatorship. For Deleuze, the privileging of bodily perception subordinates movement itself by replacing it with either a subject to carry it out or an object to submit to it. For Marks the works examined are made for a viewer to feel out and constitute – they highlight the act of perception. For Deleuze, the set of movement-images which make up cinema are definitively not addressed to anyone – they are an Appearing in which there is “not even an eye” (2).

The second way in which Marks departs directly from Deleuze in these essays is with her insistence on studying only experimental works. She reasonably asserts that experimental media are a fertile source of new ideas, but goes further in likening experimental works to a “minor science” which may or may not be eventually incorporated by the “imperial science” of commercial media (p. xiv). With her objective of redeeming film theory – restoring the flow between optic and haptic – her unwavering focus on marginal works seems a little idealised. By remaining squarely at one end of the experimental–commercial (narrative) continuum she is not questioning the boundaries of the “imperial science” but simply elevating experimental works to an elite position. The avant-garde bent of the works studied ensures their objective is always already to question assumptions regarding identification and spectatorship – their production or screening conditions can only exaggerate or highlight this questioning.

To restore to “our culture” the flow she describes in her introduction it is important to revolutionise our reading of film texts as much as our production of them. On more than one occasion Marks indicates that haptic visuality is not contingent upon a work being literally hard to make out, but can occur with (for example) a richly textured image teeming with detail or simply with the way we can become entranced by a gesture such as a lock of hair falling across an actor’s face in a narrative film (p. xi). In the vast scheme of images invented by Deleuze such incidents comprise “opsigns” – images which break the sensory-motor schema by no longer extending into action. In these images we can actually witness the continuum from optic to haptic, as we witness the ruin of action as it stumbles, dissolves then (perhaps) reassembles. The haptic or “minor” affect literally cuts into the narrative and interrupts it, shaking the viewer’s identification and bringing the two modes into stark, and visible, contrast.

Throughout Touch Marks’ juxtaposition of the personal and the theoretical is a little discomforting. Her essays are valuable to film theory precisely because of this: they offer a genuinely new voice which upsets traditional linguistic frameworks at the level of both theory and practice. It is undeniably unusual to find in an academic collection of essays letters written by the author to a filmmaker (Ken Jacobs), a description of memories evoked in the author by certain smells or summaries of ten of her dreams. There is no question that this writing is seductive and impressive, but it does tend to leave a peculiar and slightly confused impression. Her insights can be fascinating and astute but are tempered by an overly bodily, “touchy-feely” aesthetic which relies heavily upon the notion of the experimental works being produced out of love – “which (does) not simply ‘resist’ but actually build(s) new ideas and affects” (p. xiv).