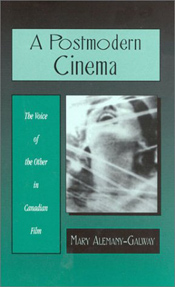 I was drawn to this book by the mention of the Other and Canadian film in the one sentence. I had an interest, having been immersed in the enterprise of Canadian independent film in the mid ’90s. This community was spread across Canada in numerous artist-run film and video co-ops and made many of its films using free film stock and processing through the National Film Board’s PAFPS (Print and Film Processing Scheme) Program. This low-level state supported network spoke to the Other and of the Other. As an independent voice – that of the mouse alongside the elephant – it was, and probably remains, a marginalized Other itself.

My initial flicker of interest was not answered the way I imagined it would be, though there are traces of this culture in A Postmodern Cinema through the mentioning of some familiar practitioners: Patricia Gruben, Joyce Weiland, Phillip Hoffman and, of course, Michael Snow – all of which are referred to in passing.

Alemany-Galway flags her debt to such practices but focuses on four, feature-length dramatic films:. . Denys Arcand’s Jesus of Montreal (1989), Patricia Rozema’s I’ve Heard the Mermaids Singing (1987), Atom Egoyan’s Family Viewing (1987) and Bill MacGillivray’s Life Classes (1987). It’s likely these films were chosen because they are familiar to a general readership.

As is expanded later on in the book, Alemany-Galway asserts that in Canada (as in Australia) there persists a colonial specter: “It might be argued that Canada is hardly a Third World nation, but she is certainly a colonized one. This is so economically and especially culturally”. (Alemany-Galway, 104)

Furthermore, within this colonial mindset, are various marginal or ‘other’ positions and groups, which the four films explore: Family Viewing is grounded in the immigrant experience; Jesus of Montreal in Quebecois identity; Life Classes in the economically challenged Maritimes provinces; and I’ve Heard the Mermaids Singing within a feminist and lesbian context.

Do these films attempt to move from the outside to the center? In a way, these are films that have escaped the low-level trajectory that the Other is permitted to inhabit and taken part in the spectacularized, international/globalized stage. Perhaps this is a remark most appropriate for Arcand and Egoyan’s work out of the four. And even then, viewed from the epicenter of mainstream film, such work is dealt with as minor. Whatever way you do end up looking at it, there does remain a connection to the margins. Egoyan states his debt this way in his foreword to Hoolboom’s Inside The Pleasure Dome: Fringe Film in Canada:

We are driven as much by narrative as by impulse, yet mainstream cinema is almost completely concerned with giving expression to ego-based story telling.

Fringe films are id-based. They address, liberated from the moderating influence of narrative, our purest sense of impulse – the way we see. To treat these films as marginal is to marginalize some integral part of ourselves. (Hoolboom, 1)

The strength of this book lies in its attempt to develop a theory for a filmmaking practice that already exists. For once theory is put at the service of the filmmaker rather than the other way around.

Alemany-Galway points out that formalism (Eisenstein), phenomenology (Bazin) and structuralism (Metz) have dictated the history of film theory. After interrogating each of these areas in turn she posits that it is through their interaction that the basis for a postmodern film theory can be developed. According to Alemany-Galway, the New French Novel is the turning point of postmodernism and Alain Resnais’ Last Year in Marienbad is the first important poststructuralist/postmodern film. Alemany-Galway, in her final chapter, reiterates the importance of these three prongs by highlighting their influence on the ruminations of others about the postmodern film.

To set the ground for an analysis of the four films Alemany-Galway also looks at Canadian film history and identity. Margaret Atwood’s thesis in Survival underpins this: “Let us suppose, for the sake of argument, that Canada as a whole is a victim, or an ‘oppressed minority’ or ‘exploited’. Let us suppose in short that Canada is a colony”.

I recall an anecdote about this identity issue. A CBC (Canada Broadcasting Corporation) national radio program ran a competition to come up with a phrase that expressed the character of Canada, akin to how “as American as apple pie” articulates that of the USA. The phrase judged the winner was “as Canadian as possible under the circumstances”: a very practical, postmodern solution to the identity riddle.

Can such issues play a larger role in any current Australian focused discussion about identity and film? Do we not think like a colony too? It seems we are further, in distance, from the elephant but as a result of that tyranny (and others) effortlessly take on the elephant’s bravado trumpeting as our own. To grow, this seamless denial needs to be uncovered. At present thinking about the “other” seems mainly to have an indigenous focus here.

Back to Canada. Atwood has articulated four victim positions that can be assumed by individuals and nation groups. These also tie-in with Franz Fanon’s assessment about three stages in the development of colonial art in a Third World context: from the native intellectual adopting the coloniser’s culture, through the past being romanticized but one’s fate remaining inevitable, to where you identify your victim position but refuse its cage. For Atwood these are: denial of victimization, general victimization and righteous anger.

To this trinity Atwood adds a fourth position, one of greatest empowerment: that of the creative non-victim where the causes of victimization have been removed. At this stage victor/victim games have become obsolete. It must be remembered, however, that such games may still be targeted, fragmented and unraveled within this position’s discourse. They are not denied. This is the position taken up by postmodern filmmakers, Alemany-Galway suggests, and evident in the four films she analyzes. For me this fourth position also connects with Maslow’s hierarchy of needs that culminates with the concept of the self-actualized individual. I also wonder how effective this fourth position can be to articulate if you are still oppressed.

Within poststructuralist/postmodern film we have a self-actualizing meta-reflexivity at work. There is an acutely self-aware process evident not only in the content but implicit in how this material is structured. Strategies of representation are often multi-layered, ambiguous, simultaneous, parallel. For the tension that such play reveals we need a theorizing that can shift and move as easily between such ways of looking and organizing. Eisenstein, Bazin and Metz need to be able to speak at once. Maybe this is just the language of survival? Cobble together whatever is possible under the circumstances.

This is an attitude necessary in this phase of multi/hyper/trans-media re-settlement. This media cacophony needs an integrating perspective, one with ambiguity in it somewhere, no doubt. Alemany-Galway suggests a road and sifts through the thinking as to its shape, provides a foundation and a status report. Certainly I concur with the idea that the solution lies at the margins, where collage and necessity have cut and pasted displaced identities into each other’s patch. Melbourne, as a place, can be a good example. This is an idea that should/could also make a film or video artist’s practice in Australia relevant to the center. This is the place 2 B. In our state of denial, this is the place where it is not-not happening.

Yet for me hope does not quite lie in theorizing a postmodern film that has entered an international globalised orbit. At Transmediale 03, the annual New Media Festival in Berlin held in February this year, I witnessed Peter Greenaway’s seamless pitch for his Tulse Luper Suitcases (2003) project and was entranced, along with everyone else by the breadth and depth of the magician and the trans-media scope of his project. Yet, this postmodern whirlwind still had this cult-ified performer firmly at its center. Why is this not a problem? 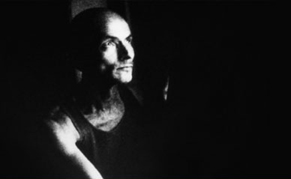 I would rather stand behind another feature length Canadian film, one more recent than those discussed by Alemany-Galway. Mike Hoolboom’s Tom (2001) is an example of a postmodern cinema we need (to talk about, to reveal). But then again, am I just making the same mistake?

Hoolboom’s heavily layered document dissects his conversations with New York filmmaker Tom Chomont, who examines the spread of his life, while AIDS eats away at his body. This is not the sort of film about AIDS and death we have come to expect. In this film it is the body of film history that goes through the wringer. It stands in for Tom, and Mike. There is Spectacle here, but not for itself. It is delivered up for a purification, a processing of the hyper, for pulling up by the bootstraps a self that could otherwise drown in a marginalizing self pity. This is a powerful, focused and self-actualizing form of filmmaking by a practitioner who has earned his stripes. To insert into another long running Canadian discourse: This is the cinema we need.

Alemany-Galway’s text has moved the discussion on. But the cinema has also moved on since 1989. There is also value bringing together and into sharper focus the work of other writers. Her text outlines a difficult beast and ingeniously places that discussion in a cinema emanating from the margins. That is where change comes from, isn’t it? It arises at the margins and gravitates to the centre. And what is wrong with that? Pause.
Fade to black.
See the films.
Read the book.

Alemany-Galway, Mary, A Postmodern Cinema: The Voice of the Other In Canadian Film, Maryland: Scarecrow Press, 2002