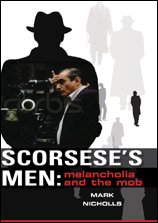 Male melancholy, according to Adrian Martin, is one of those places where cinema has a rendezvous with its destiny. Perhaps this is why cinephiles often pay particular attention to figures such as Travis Bickle, Ethan Edwards, Jake la Motta, Noodles, and Scottie Ferguson. Yet God’s lonely men are everywhere. Look beyond the masculine bravado of most gangsters, rogue cops and gunslingers and you will find the wound. It might be some personal hurt or psychological flaw, or it could stem from a social rejection or cultural exclusion. Perhaps to fully understand genres such as the western and the action film you need to enter the wound, to “commune” with it as Chris Marker does in his essay on cinematic loss, Sans Soleil (1982). As Clint Eastwood says, you can’t truly understand Dirty Harry unless you see his sadness. However, this suffering is often hidden, even repressed; it is rarely transcended. Instead, it is frequently externalised, to paraphrase Freud, as if disgust and self-loathing have been transformed into the aggression and violence often associated with screen masculinity.

Melancholia is also an interesting area of psychoanalysis. While Freud’s famous essay “Mourning and Melancholia” is one of his most psychologically perceptive pieces, the concept of melancholia remains elusive within it (1). It is as if Freud, like the patients who suffer from the condition, cannot quite see its root cause. Later theorists such as the Hungarian psychoanalysts Nicolas Abraham and Maria Torok developed Freud’s notion that melancholia involves a refusal to accept loss. They postulated that melancholia shields a psychic trauma so secret that the patient displays no obvious symptoms of his suffering because to reveal anything would be to accept that something has been lost. Only the overt appearance of affects such as sadness point to this encrypted other. More recently, Julia Kristeva has used their work to suggest that these affects protect a hidden object (or Thing as she calls it), whose loss highlights a failure to mourn the mother adequately and identify with the father. Although this represents a faithful return to Freud, Kristeva acknowledges eventually that the maternal character of the Thing is a mirage, an intellectual fiction. However, in the cinders of these debates we find what is most radical aspect about melancholia: because it is a withdrawal from desire, it is a crisis of self, not sexuality. This crisis is located in the affects of conscious behaviour, and not the repressed representations of the unconscious. Male melancholia offers us a non-phallic way of thinking about masculinity, while melancholia allows us to think about the body or trauma without decoding either according to an a priori set of psychoanalytic rules.

Mark Nicholls’ new book, based on his doctoral thesis, explores various types of masculine suffering and its consequences in the cinema of Martin Scorsese. He regards male melancholia as a regressive phenomenon, a cultural alibi for male violence and misogyny. Nicholls draws on the psychoanalytic tradition, but also closely follows the feminist insights of Juliana Schiesari in asserting that male melancholia has often functioned within Western culture to privilege masculine creativity and cultural critique through the appropriation of “traditionally female attributes” (p. 3). Nicholls also utilises Max Pensky’s reading of Walter Benjamin’s work and life in order to contend that the male melancholiac’s criticism and rejection of society is politically ineffectual, even dangerous, because it involves a deferential compromise with social forces. The male melancholiac is nothing more than a “Friday night drag queen” (p. 3).

Nicholls concentrates on five Scorsese films: The Age of Innocence (1993) Raging Bull (1980) Taxi Driver (1975) Goodfellas (1990) and Cape Fear (1991). He delineates five aspects of the male melancholiac’s condition, some or all of which are present in each of these texts: alienation from a “corrupt and conservative group”; an experience of trauma or loss; a refusal to accept that loss, which results in its protection in fantasy form and fetishisation; a desire to return to the group; and a benefit “from the consolidation of personal authority and power through the workings of melancholia” (p. xv).

Readers of Senses will associate the apparent resistance of the Scorsese hero to group corruption with Travis Bickle in Taxi Driver and (perhaps) Jake la Motta in Raging Bull. Nicholls, though, designates Newland Archer in The Age of Innocence as “Scorsese’s most patent male melancholic” (p. 16). Archer recognises and attempts to defy the stultifying limitations of an elite New York social class that regulates sexual behaviour and personal dissent through the careful observation of rituals such as the formal dinner party. While his attraction to the socially undesirable Countess Ellen Olenska seems transgressive, Nicholls reads it as part of Newland’s “compulsive search for loss and an obsessive care to preserve that loss: he wants his desire to be unsatisfied” (p. 16). Archer does not love Ellen so much as the prospect of losing her. She is another of his worthy causes, an image to be adored from a distance, or treasured as an object (as Newland does when he sniffs her parasol). The emotional investments he makes in keeping the affair (if it can be called that) secret and in his displays of suffering as he sacrifices the chance for happiness with Ellen are alibis for his adherence to convention; he has no real intention of leaving fiancée (and later wife) May. Even after May’s death, when his son reveals that Newland’s attraction to Ellen was well known in his social circle, he remains “old-fashioned”. He prefers to memorialise Ellen in the past rather than encounter her in the present.

This is a melancholic book. It returns readers to a type of psychoanalytic film criticism many thought dead. Nicholls interprets the films through a character driven narrative analysis moulded according to his theoretical framework. While the chapter on The Age of Innocence is moderately successful, his approach becomes problematic in other sections, such as the analysis of Raging Bull. Nicholls uses Freud’s discredited theories about the foundations of social order in Totem and Taboo to read Raging Bull as a struggle between boxer Jake la Motta and organised crime. He claims that Jake refuses to function as a sacrificial animal for the mob (which wants him to deliberately lose a fight in order to gain a shot at the world title). Rather, he acts as a primal father of the “group” around him (his wife and brother Joey), thereby indulging in a “fantasy cycle of horde posturing, sacrifice, punishment and atonement” (p. 47). But this power can only ever be temporary; eventually Jake undergoes symbolic castration by submitting to the mob’s wishes. Nicholls also argues that Jake la Motta’s jealousy and violence are examples of his thinly disguised homoeroticism and masochism. This leads Nicholls to suggest the following when Jake taunts Joey into punching his face early on:

By allowing/forcing Joey to beat him, Jake adopts the masochistic position – apparently enjoying his symbolic rape by his younger brother. Because of the film’s association of Jake’s fist with the phallus, there is no doubt that the encounter is symbolically a sexual one. Joey’s sexual subservience confirms, on one level, Jake’s horde authority (p. 57).

Can Jake consent to rape? Can Joey be both a rapist and a sexual slave at the same time? Do three people constitute a primal horde? Whatever one thinks of this kind of “symptomatic” film criticism, Nicholls’ analysis clearly ignores much of the text: Jake does not have sexual feelings for Joey; Jake’s battles are mainly with himself and his body, rather than the mob; Joey is the brother who belongs to both groups, etc.

What, then, is the melancholic object of this book? On a theoretical level, it might be “psychoanalysis”. Despite his feminist leanings, Nicholls does not seriously question the patriarchal nature of psychoanalysis. One wonders why he resurrects the fiction of the primal father? He makes a telling decision to gloss over Freud’s central text on mob behaviour, “Group Psychology and the Analysis of the Ego”. Why should this matter? Well, Freud’s problem in this strange and contorted essay is that he tries to explain group psychology via individual psychology (that is, psychoanalysis). He fails so dismally that he ends up proving the opposite: the development of individual subjectivity can only be accounted for through the power of the group. Freud is compelled to introduce the myth of the primal father to restore the pre-eminence of his own theory. Thus, he argues that it is through a blind, hypnotic obedience to the father (or group leader, since this führer is modelled on the primal father) that we become subjects. In turn this allows us to bind together as group members, because we share a filial bond, our absolute loyalty to this figure. However, in the process Freud effectively deconstructs psychoanalysis by conceding everything to the mysterious force behind group psychology, the power of suggestion. His theoretical edifice is therefore indistinguishable from precisely what he claimed to reject, the study of hypnosis or suggestion, or how one affects another. Thus group psychology turns on affects, not (representations of) desire. Nicholls does not acknowledge these losses; rather he remains loyal to the “corrupt and conservative group” (2).

The other Thing that might be encrypted in the text is the question of Scorsese’s style, or what makes his films cinematic; it is something that Nicholls considers rarely. The book doesn’t adequately address how these films might affect viewers through visual and aural strategies. Do these films transform us into male melancholiacs, or are we merely passive spectators? Nicholls proposes that Travis is not really a rebel, merely a flaneur cruising the streets of New York in the manner of the dandified writer in nineteenth century Paris. When watching Scorsese’s cinema are we just taking a short cab ride to an emotional Hades, the effects of which we shrug off later, or does Scorsese’s style infect us? Bt marginalising stylistic analysis, Nicholls misses a wonderful chance to investigate what attracts so many people to Scorsese. Surely it is the cinematic qualities of Scorsese’s films, including his propensity for citing and reworking film history, which create and reinforce the melancholy yearning of the cinephile? If Nicholls had critically explored this dimension of Scorsese’s work, or rigorously questioned the group dynamics of psychoanalysis, then his “pursuit of a moral vision that is antithetical to the repressive mob culture which surrounds him” (xiv) might have been more persuasive.