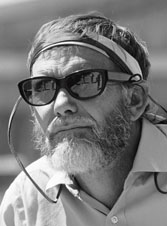 The utopian impulse at work in Gabrielle Murray’s contemporary account of Sam Peckinpah’s films is given away by her book’s striking title. Our current state of existence is, for Murray, wounded: relations in the postmodern era are disengaged and disembodied, and life is meaningless and abstracted. Where our ancestors lived with a certain respect for the richness and diversity of life, the reality of contemporary existence has impelled a loss of faith whereby we can no longer believe in dreams of a better world. The premise of Murray’s study, then, lies with the question she explicitly poses in her second chapter: is it possible to reclaim a different kind of experience? (30) This premise frames her own utopian impulse as an effort to reverse the impossibility of utopia, and necessarily implies a rethinking of the very concept. Drawing on thinkers including Heraclitus and Albert Camus, Murray examines the capacity of the cinema, and Peckinpah’s films in particular, to help us to think something like a relative utopia; a state describing not a mythical, glorious past or future but the potential of our present reality – the “right here right now” (81, quoting Ursula Le Guin).

For Murray, this “reclaimed” experience would involve “putting ourselves in the picture” (31, quoting Marshall Burman), remembering how to participate in life through projection and identification. The cinema has a unique role to play here. Referring to Stanley Cavell and Richard Dyer, Murray examines the utopian capacity of cinema to offer transcendence through illusory identification – an engagement with an experience that seems full, direct and present. Cinema offers dynamic representations of the natural world which indicate the animation – whether violent or joyous – that we overlook in our daily lives. Peckinpah’s cinema, as has been examined in other critical approaches to his work, is particularly rich in myths, archetypes and rituals. Some of the violent imagery most frequently commented on – the scorpions being set alight by the children of The Wild Bunch (1969), the cockfight and chicken shootings in Pat Garrett and Billy the Kid (1973) – refer back to archetypes and ancient rituals. Murray suggests that finding the presence of these aesthetically expressive moments in Peckinpah’s films reminds the viewer of the possibility of engaging lyrically with the world. But, further, these moments of simultaneous violence and lyricism involve a questioning of existence itself and of how we should live. The terms of Murray’s subtitle – violence and utopia – express the two fundamental aspects of existence: our fear of death and our dreams of a better life.

In one sense, Murray’s argument against postmodernism runs analogous to Peckinpah’s own critique of the destructive power of progress. This theme occurs throughout his films like a refrain; expressed, for example, in Junior Bonner‘s (1972) story of a land developer who sells his own parents’ houses from under them. In Peckinpah’s films, progress (which is, for his concerns, expressed as industrialisation) implies the loss of what is real and true. As Murray notes, Peckinpah takes the Western’s myths of “land” and “community” and fleshes them out so that we understand these terms not as abstract concepts but as finite forms – embodied human beings and their physical environment (84). And one thing Murray dwells upon is how this approach always manages to find the sensual or communal potential of a destructive or violent situation: in Junior Bonner, Junior’s discovery of his father’s ranch being razed to the ground ultimately leads him to caring and genuine encounters with both his mother and father. The utopian moments of the films are not distinct from the violent interludes but contained within them. Similarly, Murray argues that we cannot look elsewhere (to the past or future) for our own utopia but must look within the terms of our current existence – within elements such as cinematic representation – however dystopic these may seem.

The bulk of Peckinpah analysis to date has been written by American, male critics in the 1960s and 70s, around the time of the films’ releases By revisiting these films in the early 21st century, Murray thoroughly contemporises the approach to Peckinpah’s work. For, in rethinking the terms of a possible utopia, Murray also rethinks the traditional terms of violence. As such, she doesn’t approach Peckinpah’s films through the frame of “ultraviolence” or through the Western’s particular myth of regeneration through violence. As mentioned, the violence of the films, and especially the couple of life/death, is the key to their reclaiming power. Violence is arguably still regenerative but not as a direct means to an end, as tends to occur in both the classic Western and in much historical analysis of Peckinpah. Rather, for Murray, the moment of life/death is an end in itself. This shift means Peckinpah is not approached as gratuitous – as “Bloody Sam” – but as a “primitive philosopher” who examines this couple not as a process but as a paradox. The philosophy grounding this approach is that of Heraclitus, and his argument that the only security is the ever present face of death. Tracing this logic through Edgar Morin, and ultimately finding it in Peckinpah, Murray examines how the “security” doesn’t add up to pessimism but to an acceptance of life as an ever-changing condition of flux. The state of flux, for Heraclitus and Morin, is not chaotic and discontinuous but harmonious, marking the “oneness” or sameness of the world. To experience life as a confrontation of our mortal fate then, is not a negative and hopeless endeavour but an embracing of life’s transitory nature – its chance, trouble and joy. To exist in light of the ontological paradox of life and death is to “persevere” in one’s existence, to confront all that life throws at one fully and to live like a “dancing spurt of flame”.

For Murray, Peckinpah’s “aesthetic of violence” evokes this flux of existence. This framework lends to the films a peculiar humanity, for the condition of flux is a quality unique to the organism. The violent confrontations of Peckinpah’s films are read not as a machinic progression toward achievement – of victory, balance, identity – but as the unstable process of life itself. Murray frequently refers to the poetry of Peckinpah’s violent sequences. Going further than commenting on the choreography and stylisation of these moments, she refers to the way violence allows the characters an ecstatic experience: it is in the face of death, and in that moment between life and death, when they are most fully alive. The utopian quality of Peckinpah’s violence lies in its immanence: it is not for anything other than itself. This experiential quality applies to both the characters, who feel alive only when dying, and the viewer, who engages with the vitality on screen as pure, vigorous energy, rather than one step in a rational, narrative progression. In Murray’s analysis, the utopia of these works is not confined to the “gentler” moments of the films, although she does dwell on those moments of song, laughter, food and sex in some detail. Violence and utopia are not seen as two poles, or even two moods, but are inextricably bound together: the utopian experience is dangerous and regressive, as it can always result in death, but it is only through this negative potential that it can form an ideal. In this way, Murray’s own utopian impulse coincides with that which she finds in Peckinpah’s films, for the viewer’s experience of their own relative utopia is found in those moments of violence: the spontaneous, physical response evoked reminds us of our own capacity for engagement with the world.

Murray’s rethinking of the concepts of violence and utopia with regard to Peckinpah’s work brings a contemporary framework to these films. For Murray, approaching the films in this way offers the postmodern viewer a chance to revive their own experience in relation to both the films and to the world. But her readdressing – her reclaiming – of the violence/utopia couple has at least one other significant effect: it offers a model for thinking these works outside of their mere violence. Are Peckinpah’s films really so “ultraviolent” in the postmodern era that Murray deplores? To contemporary viewers more accustomed to cinematic visualisations of dystopias, the violence of Peckinpah’s 1960s and 70s-era films is no longer so definitive, so indescribably bloody. Where it can perhaps no longer trade on its original, modernist motif, Murray rethinks this body of work in a manner which ensures its specific relevance to a postmodern audience, and beyond.

This Wounded Cinema, This Wounded Life: Violence and Utopia in the Films of Sam Peckinpah, by Gabrielle Murray, Praeger Publishers, Westport CT, 2004.