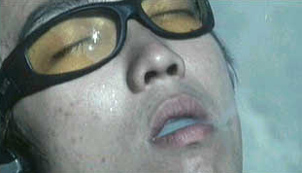 Made in Hong Kong (1997) opens to a continuous, isolated shot of a wire mesh fence as a cocky but affable young man named Autumn Moon (Sam Lee)—a self-professed lone wolf—plays street basketball with other underemployed, high school dropouts in a public playground. Meanwhile, Moon dispassionately comments on his vacuous life in the concrete jungle as a hired thug for a mob boss named Big Brother Wing (Chan Sang) and self-appointed protector of a defenseless, trouble-prone, mentally disabled friend named Sylvester (Wenbers Li Tung-Chuen). Dispatched by Big Brother Wing to collect a loan sharking debt at a high-rise tenement complex from a resident named Mrs. Lam (Carol Lam Kit-Fong), Moon and Sylvester briefly stop to watch an altercation between a defensively hostile neighbor and a pair of collection agents from the Bank of Canton, ironically, as an overcurious Mrs. Lam derisively looks on. Inserting himself in front of the retractable front door gate as Mrs. Lam returns to the apartment, Moon catches his first glimpse of her daughter – an attractive and vivacious, but gravely ill young woman named Ping (Neiky Yim Hui-Chi) who suffers from a terminal kidney ailment. From their first encounter, Moon and Ping’s fates seem inextricably connected—an innate sense of pre-destiny that is sealed one day when, while carrying the trash out to the curb, Sylvester witnesses an unknown young woman leap to her death from an adjacent rooftop overlooking a church steeple. In his confusion, Sylvester accidentally retrieves the two, blood soaked suicide notes that landed near her body and pockets them. In hindsight, Moon would look upon this innocuously impulsive act as the portentous turning point of their hopeless and ultimately tragic lives.

From the opening shot of the forbidding public playground fence, the indelible images of ubiquitous—and characteristically urban—metal barriers pervade the film. After deriving from the farewell letters that the identity of the young woman who committed suicide is Susan Hui (Amy Tam Ka-Chuen), Moon begins to be haunted by the senseless and impersonal nature of her death and, accompanied by Sylvester and Ping, decides to deliver the letters to their intended recipients in order to placate her restless spirit. Their initial destination, reflected through two separate shots of the adventure-seeking friends behind obstructive enclosures—the first, against a grid-meshed guardrail, underneath a metaphoric, directional weathervane, and the second, a property fence surrounding the playground—is to an all-girls private school in search of the object of Susan’s unrequited love – a callous Physical Education teacher named Wong Wing-nam (Ricky Lau) who promptly shreds the letter without reading. However, the final letter delivery to Susan’s parents, episodically shown through Moon and Ping’s attempts to alternately view Susan’s memorial portrait through the security window bars of the Hui’s apartment, is thwarted when her parents discover their intrusive peeping and chase them away.

The theme of division is further reflected through the incomplete and severed familial relationships of the three principal characters. The absence of Moon and Ping’s irresponsible fathers from the household have left their families in financial distress and at the mercy of opportunists eager to exploit their indebtedness and recruit their adolescent children into an inescapable life of poverty and crime. After Sylvester is brought to the hospital for treatment of a severe nosebleed, the nurse discovers that he has been disowned by his family, and is left to fend for himself in the violent, triad-controlled streets, under the tenuous care of the immature Moon, and at the mercy of the calculating and unsentimental Big Brother Wing. Moreover, the shocking episode depicting the crude amputation of a middle-aged man’s hand in a public restroom after his adolescent son discovers his incestuous violation of the boy’s younger sister mirrors Moon’s own desperate, unrealized intent to retaliate against his father, as he watches the bizarre and harrowing encounter unfold while biding time in the restroom, with a cleaver on hand, awaiting his father’s return to his mistress’s apartment.

The portrait of fractured, dispossessed families also proves to be a recurring motif in Fruit Chan’s subsequent films. Little Cheung (Yuet-Ming Yiu) pines for a missing older brother disowned by the family after discovering his involvement with organized crime in Little Cheung (1999). Fan’s (Wai-Fan Mak) family abandons their humble and bucolic life in Shenzhen province in mainland China in order to be united with their father in Hong Kong, eking out a marginal existence as illegal immigrants in search of a better life after the post-colonial handover in Durian Durian (2000). The maternal longing of the morbidly overweight roast pork merchants, the Chu family, metastasizes into a dysfunctional, anthropomorphic affection towards their pampered, prized breeding pig, Mama, in the absurd comic fantasy, Hollywood Hong Kong (2001). Similarly, in Made in Hong Kong, the ill-fated trajectory of Moon’s hapless life may be traced through the systematic and seemingly inevitable dissolution of his nuclear and surrogate families. Ultimately, the quiet tragedy of the film lies in the once brash and carefree Moon’s resigned acceptance of the reality of his irredeemable, profound loss—his defined “immunity” against an uncertain world—the poignant realization that the pervasive, constrictive barriers imposed by society cannot be idealistically overcome by innocence, vitality, tenacity, patience, or even love.

Shot as a low budget feature using odd length, reclaimed scrap film stock and featuring a cast of nonprofessional actors, Made in Hong Kong is a stylistically bold, intelligently conceived, and compassionate portrait of aimlessness and disconnection. Chan’s audacious and resourceful camerawork exploits the natural, frenetic rhythm of city life to create an atmosphere of disorientation and insignificance that, in turn, reflects the nihilism and despair of the young, disaffected protagonists. In a lighthearted and subtly affecting scene that occurs midway through the film, the three friends discover a picturesque viewing location from atop a vast hillside cemetery and begin to casually search for Susan’s grave among the countless tombstones. It is a liberating episode that is repeated at the end of the film—a fleeting moment that encapsulates the irreconcilable paradox of their existence—the passionate, unanswered cries of lost youth in search of identity and validation amidst the alienating silence of an apathetic and inutile society rooted in human commodification, marginalization, and disposability.