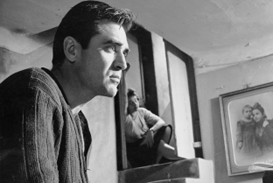 A Personal Journey with Martin Scorsese Through American Movies (Martin Scorsese and Michael Henry Wilson, 1995) is an inexhaustible source of discovery, an authoritative guide that you do not often find in histories of the cinema. Can the same be said of Scorsese’s other, most recent documentary, Il Mio Viaggio in Italia (My Voyage to Italy, 1999), in which he expresses his love for Italian cinema? In this latest, longer film, Scorsese’s analysis of each movie is persuasive and insightful, offering a new and passionate view on important works such as Rossellini’s Stromboli (1949) and Viaggio in Italia (1953). As a film lover and critic, however, what is unsatisfying is Scorsese’s conventional view of Italian film history. He doesn’t discuss it fully, as he does American cinema in A Personal Journey; he doesn’t uncover forgotten or undervalued masterpieces of Italian cinema. Not only does Scorsese accept the traditional, historical and canonised view of Italian cinema (which in part may be due to the influence of his collaborator, the famous screenwriter Suso Cecchi D’Amico), he also ignores significant periods.

Il Mio Viaggio in Italia ends with 8½ (Federico Fellini, 1963); the director of Gangs of New York (2002) identifies with Fellini’s creative torment, positioning 8½ as turning point. Not all critics and Italian historians would agree that this film is the highpoint of Fellini’s career (in fact some would accuse Fellini of having begun in this movie to indulge in narcissistic tendencies), but certainly Scorsese’s choice is understandable. However, this reveals Scorsese’s methodology: a tendency to view the history of Italian cinema as a series of isolated masterpieces by auteurs, ignoring the wider context.

A case in point is that of Antonioni’s films. Only his ‘trilogy’ – L’avventura (1960), La notte (1961) and L’eclisse (1962) – is analysed. Scorsese ignores Antonioni’s beginnings as a documentary filmmaker. He does not analyse the emptiness of the bourgeois in Cronaca di un amore (1950), an innovative film at the time of the populist Neo-realism for its characterisation of the bourgeois and its contribution to film noir. No word is made about La signora senza camelie (1953), a groundbreaking film for its representation of the relationship between art, money and stardom (and in this regard, it is also odd that Visconti’s Bellissima [1951], another film about movie industry barely rates a mention). And no mention at all is made about Antonioni’s Il Grido (1957), often considered his masterpiece. Il Grido, starring Steve Cochran and Alida Valli, was a scandal at the time of release because it showed the existential crisis of a worker, who ends up committing suicide. The film is still censored in Italy (a more complete version, although not the director’s cut, is released on DVD by the US company, Kinevideo). The scandal was not only the suicide: leftist intellectuals considered it a blasphemy to show a worker oppressed by anguish and disinterested in social struggle. Il Grido as well as Cronica di un amore anticipate the themes of L’avventura. And the dialogue in the trilogy seems much more literary when confronted with the essentiality of Il Grido and Antonioni’s other earlier films.

Scrolling down Scorsese’s list of celebrated directors, one finds the usual undisputed suspects: Rossellini, De Sica, Visconti, Fellini, Antonioni. And that’s it. The following are briefly mentioned: Pastrone, for his contribution to silent movies (previously cited in A Personal Journey); Blasetti, for his contribution to popular cinema (as creator of the epic Fabiola [1949]); and Bava, for his debut as cinematographer of Rossellini’s short movies. Germi is mentioned seemingly only because his Divorzio all’italiana (1961) features a sequence in which La Dolce Vita (Fellini, 1959) is being released in the cinemas of a very conservative Sicilian town. I ask myself if this same perception of Italian cinema is widespread overseas.

Let’s begin with neo-realism. Alongside ‘the stalking of reality’ theorised by Zavattini, there is the populist Neo-realism of Luigi Zampa, and above all Giuseppe De Santis (Non c’è pace tra gli ulivi [1950], Riso amaro [1949]). As a Marxist, De Santis developed a popular and didactic cinema influenced by American and Soviet cinema. And Pietro Germi’s best films, made before Divorzio all’ italiana, were visually splendid, ‘neo-realist films’ influenced not only by Jules Dassin’s film noir, but also by westerns and Soviet cinema (this is evident in the use of space in the very first film about the mafia, Germi’s 1949, In nome della legge).

Italian film critics and historians are definitely to blame, in part, for disregarding other directors and concentrating solely on De Sica and Rossellini. Germi, for example, as a loner not influenced by Marxism, was considered a petty bourgeois of little consequence. As a result, not many people outside of Italy are familiar with his Un maledetto imbroglio (1959) based on Carlo Emilio Gadda’s novel, Quer pasticciaccio brutto de via Merulana. Un maledetto imbroglio is not only a key to understanding the grotesque in Divorzio all’italiana but also Italian comedy generally. Without understanding Un maledetto imbroglio one cannot fully appreciate Pasolini (who, as a film critic, had to admit, somehow unwillingly, the merits of Un maledetto imbroglio), because Germi was the first to film anthropological mutation and the ‘homogenisation’ (“omologazione”, in Pasolini’s terms) of the Roman proletariat in a consumerist society.

A great deal has been written on Germi in recent years and many of his films have been restored. However, despite the fact that many of his important films of the ’60s (Signore & signori, [1966]) have not been re-released for copyright reasons, I ask myself whether Germi’s renaissance has travelled to the world of academia and film history outside of Italy.

Even an excellent cinema history text by that of David Bordwell and Kristin Thompson, which gives due attention to the linguistic, economic and the social, only refers to Germi’s Divorzio all’italiana. Alberto Lattuada, who made a significant contribution to neo-realism in Senza pietà (1948), is referred to only fleetingly. Antonio Pietrangeli is not mentioned at all.

Who outside of Italy has seen Io la conoscevo bene (Pietrangeli, 1965)? In Italy it is considered a key film for its understanding of the economic boom of the ’60s and its victims, as well as for presenting one of the most beautiful depictions of women in Italian cinema. It might be that it is known by French historians, but by whom else? What if Pietrangeli were French? Surely, today he would be as famous as Sautet if not Truffaut.

The French have given Italian comedy better attention, thanks in part to the work done by Jean A. Gili. Yet even in this case the square seems to me to be curiously out of shape. Dino Risi, Mario Monicelli and Luigi Comencini are more or less appreciated and recognised specifically for certain films and certain periods in their long careers – however Luciano Salce, Vittorio Caprioli, Antonio Pietrangeli and Damiano Damiani, much less so. What is curious is that the directors who are better known are those who paid less attention to style (Risi’s direction is rigid and static; the merits in his films lie mostly in the screenplays and the acting) and who made easier, safer and less angry films. It’s the usual story of the “commedia all’italiana” which “effects a social critic laughing” [as in the latin motto “castigat ridendo mores”], and whose main characters (anti-heroes anyway) are easily absolved and gotten off lightly without too harsh criticism from the director.

It doesn’t happen as such in uncompromising movies like Il sicario (The Hired Gun, 1960) or La rimpatriata (The reunion, 1963) by Damiani, who later directed a wonderful western (Quien sabe?/A Bullet for the General) and many tough police dramas in the ’70s. 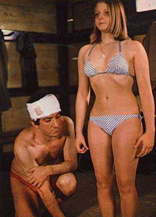 In general, in Italy as elsewhere, the directors that were more attuned to style, that were more experimental and more avant-garde have been largely forgotten. However I am certain that the vision in such films as Salce’s Le ore dell’amore (1963) or Caprioli’s Parigi o cara (1962) hold many surprises for those who see Italian cinema only through the broad, folkloristic stereotypes divulged by the ‘unguilty’ Germi in Divorzio all’italiana – ‘unguilty’ because he wasn’t to blame for the success of this movie.

Speaking about auteurs, we cannot complain that Pasolini and Ferreri are not well known (and to a lesser extent Bellocchio). But outside of Italy who has heard of Sergio Citti who in Ostia (1970), Storie scellerate (1973) and Casotto (1977) shows that he has learnt from Pasolini and moved on to produce works of great originality. Even Paris’s Cinémathèque (which is very snobbish, and has celebrated the dubious art of the gynecologist Tinto Brass) is yet to discover Sergio Citti. The same can be said of Carmelo Bene. Senses of Cinema remembered him but the work of intellectuals such as Deleuze and Klossowski has not been enough to generate interest and have Bene’s impressive avant-garde films shown around the world.

The problem is obviously more complex than a film being ignored or forgotten. The problem lies at the heart of the cultural economy and the home video market. Those who select are not disinterested or naïve. And as much as I admire Bava, having written the only Italian book on him, I would prefer to find L’ape regina (Ferreri, 1963) on DVD (the uncut version, of course which is not available in Italy due to the archaic censorship laws which no-one has bothered to abolish) or Ferreri’s L’harem (1968) rather than Bava’s Quante volte quella notte (1972).

In conclusion, it is a matter of memory and cultural history. I have argued that Italian critics and film historians are partly responsible for having constructed a simplistic version of Italian cinema based on a few auteurs and select periods (first neo-realism followed by Italian comedy and somewhere on the side the grand masters such as Visconti and Fellini). It is a vision that has penalised the richness of works that flourished between auteurs and popular cinema. The result? Only the auteurs (Fellini) and the major craftsmen (Bava and Fulci) are remembered, while all the directors who find themselves in the middle zone (Lattuada, Salce and Damiani) have been forgotten. 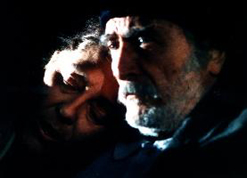 But the problem is the same with contemporary Italian cinema. Which movies are seen abroad (thanks to state funding) and in the festivals? That an old-fashioned film such as Pupi Avati’s Il Cuore Altrove (2003) is featured in the Cannes selection (mainly because Avati is director of Cinecittà Holding) is only depressing. It is of no surprise that the best Italian film of recent years, Giuseppe M. Gaudino’s Giro di lune tra terra e mare (1997), has not been seen outside of Italy – but this is another story.

Translated by Angela Villella and the author.