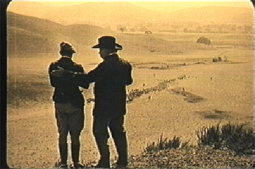 Bucking Broadway was Jack Ford’s ninth movie in 1917. He had gotten a late start, having directed his first picture ever that year, but would shoot two or three more before the year was out. All of them, after the first three, starred Cheyenne Harry Carey and usually had Molly Malone as the girl, Vester Pegg the villain, George Hively writing, Ben Reynolds or John W. Brown on camera. 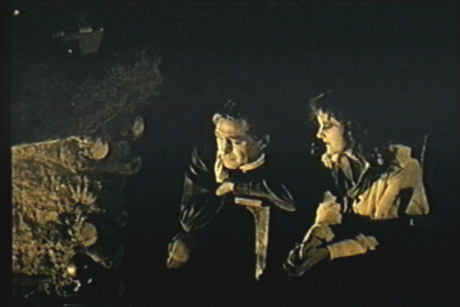 All of them are “lost films.” Except two which came back to life. Straight Shooting, discovered under a Czech alias in Prague around 1969, is a deep melodrama as moving as any surviving Ford picture until 1929. In contrast, Bucking Broadway, discovered under a French alias in Paris in 2000 (at the Service des Archives du Film du Centre National de la Cinématographie [CNC], where it had been dwelling as À l’assaut du boulevard in a large collection acquired 30 years earlier) is a light comedy, more journeyman, yet astonishly good considering the circumstances in which it was made. Pegg is nothing more than a loathsome lounge lizard with big eyeballs, and no emotion on Molly Malone’s body suggests why she’d elope with him and stab Carey in the back. 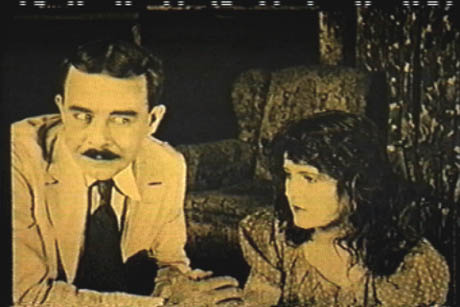 But Carey has substance, albeit as virtue incarnate. Emotions play all over his body, when he tells Molly’s father, “If SHE ever comes back, I want her to have the little house I had built for her.” (In Liberty Valance, 45 years later, John Wayne, confronted with a similar situation, burns the little house down trying to kill himself.)

The movies of 1917 started a four-year, 25-film association between Ford and Carey. Carey was 39, the son of a White Plains special sessions judge, and a seasoned veteran of Griffith’s Biograph troupe. Ford was only 21. But they were both about six feet, 170 pounds, and they liked riding out to location on horseback, camping in bedrolls, and flushing out stories as they went along. Later they would let George Hively write up the stories and get screen credit. They all lived together on Carey’s farm. Ford slept in the alfalfa patch. He was “adorable,” Harry’s wife Olive recalled. “He had a beautiful walk, not too argumentative, a good listener.” (1) Thirty years later, we find Olive tending the house we see at the end of The Searchers.

Their movies were successful because of Carey’s relaxed, receptive humility. He never seemed superior to his audience or his roles. In contrast to western heroes like Tom Mix or William S. Hart, “Cheyenne Harry” was a bum, a saddle tramp — a good badman, like so many of Ford’s heroes.

The essentials of John Ford’s acting style can be found in the pictures of his brother Francis Ford, from whom he took his stage-name (they were born Feeney) and with whom he’d just served a rigorous three-year apprenticeship: relaxed relating. There is the same love for vigorous action, painterly compositions, an underlying stream of oxymoronic humor, and warmth: a sense of communal sharing. Films in those days were made in community, as well, by the same troupe of players, writer, cameraman, director month after month — and both brothers found ways to continue this mode of production long after it ceased being an industry norm.

Perhaps to spite the haste of production, and the speed of the action (Wyoming is only a splice away from New York and Broadway), Ford concentrates on moments of still reflection. 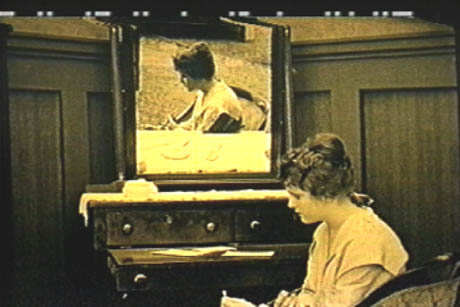 This was his trump card in Straight Shooting, too. He photographs thought. Sometimes he does so bizarrely. When Molly thinks of Harry, we see him (of course on a horse – but sitting); 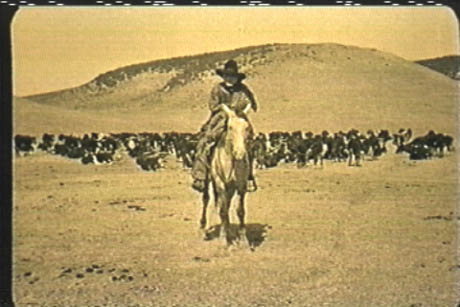 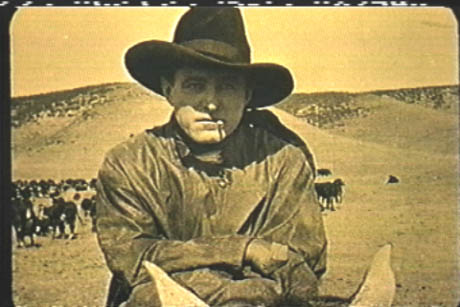 and when Harry misidentifies a hissing noise (from a steam radiator), we see a snake. What’s wonderful is how often, without such visualization, we find ourselves thinking of one character while staring into the face of another. Many traits like this one, inherited from brother Frank, are intensified in Jack’s hands, so that already his movies seem more “personable” than other films: emphasis on the girl suffering, on moral aspects, on feelings; inventing a bit of business for each shot; a whacky sense of humor. Cowboys jump onto a train from a galloping horse in a thousand films; this time the purser wants a ticket. A comic braw — the first (?) of a couple dozen in Ford — is staged on a hotel terrace, a geometric set which allows for six stages displaying a dozen fights simultaneously. 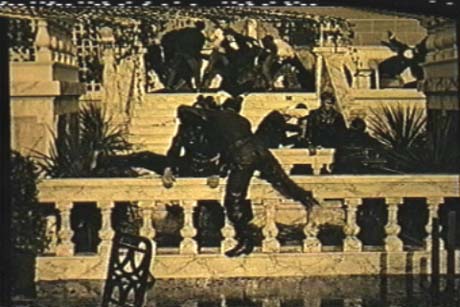 All three of Ford’s surviving silents with Carey cry out for music. Cowboys sit listening to a record in Straight Shooting, sing “Genevieve” all through Hell Bent (1918), and in Bucking Broadway Ford shows the piano keys so close, while a cowboy picks out “Home Sweet Home,” that we see exactly the rhythm.

Universal publicity claimed Carey fractured a rib in the fight, falling 15 feet, and that 20 cowboys galloped down Broadway (in Los Angeles). Looks to me like five feet and seven cowboys. 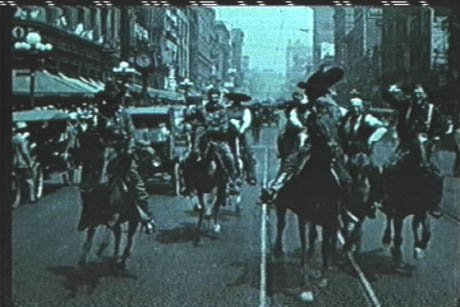 CNC’s restoration is a model of its kind. By digitizing the nitrate before transferring it back to 35mm, CNC has been able to improve on the source material 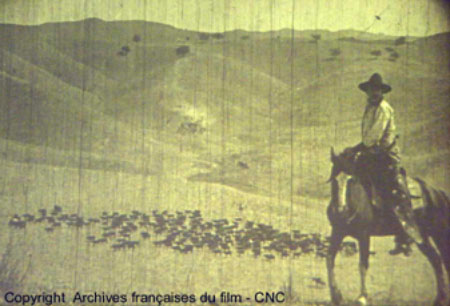 rather than degrading it, as happens in most purely photographic “restorations.” Lines and scratches and missing pieces have been filled in, and an infinitely more delicate toning has been used instead of the usual garish color filtering. The one sore spot are the intertitles. Rather than use the original ones, of which transcripts survive in Indiana University’s Lilly Library (and probably at Universal Pictures, too), New York’s Museum of Modern Art has translated the nitrate’s French titles into occasionally unidiomatic English. Which is a disservice to John Ford and the marvelous resurrection of this lost movie. If only prints of Straight Shooting looked this good!