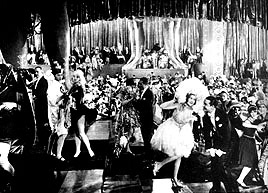 Dr. Giraud and his wife, Suzanne, live opposite the home of Monsieur and Mme. Lalle, two performers, disillusioned in their marriage. Dr. Giraud is pleasantly surprised to discover that Mme. Lalle is Georgette, an old flame. Georgette lures Dr. Giraud to a rendezvous at a café by fabricating an appointment with an ill patient. This episode leads to Dr. Giraud being cited for speeding and insulting a police officer, with a resultant three-day prison sentence that begins the night of the artists’ ball. Giraud uses the prison summons as an opportunity to attend the ball with Georgette. Meanwhile, Georgette’s husband, feigning illness, visits Suzanne in an attempt to seduce her. Suzanne is not interested. A police official arrives to arrest Giraud, and, so as not to compromise Suzanne, Monsieur Lalle pretends to be Dr. Giraud and is arrested in his stead. Suzanne, listening to the radio, hears that her husband has won the Charleston competition and decides to teach him a lesson…

The moral codes prevailing in American films of the early 1920s generally treated sex as a taboo subject. A few filmmakers, however, attempted to respond to the changing moral climate of American society. Cecil B. De Mille directed a number of successful pot-boilers that pushed the sexual boundaries, films with lurid titles such as Old Wives for New (1918), Why Change Your Wife? (1920) and Forbidden Fruit (1922). These films portrayed sexually motivated female characters who were ultimately rebuked. Erich von Stroheim openly and graphically illustrated the destructive forces of sexuality in his films. Charlie Chaplin attempted to deal with sexual relationships in an honest manner in A Woman of Paris (1923), and although a critical success, it had been punished at the box-office, the only of his features to be a financial failure.

It was into this environment that Ernst Lubitsch arrived from Germany to direct Mary Pickford in Rosita (1923), his first American film. The film, a period melodrama, was a success and was followed by a five picture contract with the fledgling Warner Brothers studio: the ultimate financial success of these five films helping to create the great movie empire. Lubitsch’s first film for Warners, The Marriage Circle (1924), was heavily influenced by Chaplin’s film and was also a huge critical success. It was Lubitsch’s first American comedy of manners. A string of successful comedies (interrupted by a drama for Paramount) followed, starring many of the Warner Brothers’ stable of actors including Monte Blue who was the male lead in three: The Marriage Circle, Kiss Me Again (1925) and So This is Paris. (1) So This is Paris was the final film in Lubitsch’s contract with Warner Brothers.

The source material for So This is Paris was the same as for Johann Strauss’ Die Fledermaus, the play Reveillon written by Henri Meilhac and Ludovic Halévy. Lubitsch had earlier directed, in Germany, a version of the Strauss operetta as Ein Fideles Gefängnis (The Merry Jail, 1917). Ein Fideles Gefängnis was the first of Lubitsch’s films to display the central concerns of the future auteur, and so a comparison of it with So This is Paris illustrates Lubitsch’s development as a filmmaker.

The films were set in Berlin and Paris respectively, each sophisticated European cities freed from the puritanical constraints and the Prohibition of the United States. Both cities carried allusions to illicit sex without moral retribution. (Having a reference to Paris in the title of So This is Paris also reinforced that connection, as well as possibly providing a link to Chaplin’s film’s and its concern with uninhibited sexual relationships). In essence, Ein Fideles Gefängnis appears as a rough sketch for So This is Paris: the plot is less well-formed and the characters are cruder and less amiable than those in So This is Paris. Ein Fideles Gefängnis is also significantly shorter than So This is Paris and lacks the introductory act of the later film, beginning shortly before the prison summons arrives. In contrast, Ein Fideles Gefängnis includes a long section, inter-cut with the ball sequence, showing the wife’s pursuer in prison, now a card sharp admired by both the other inmates and his drunken jailer. (The jailer is portrayed by the great expressionist actor, Emil Jannings, whose performance is grossly exuberant.) By the time Lubitsch arrived in America the performances in his films had become controlled and ‘realistic,’ with the humour being expressed through the circumstances and the dialogue, and not through an exaggeration in the acting. Although the prison sequence in Ein Fideles Gefängnis has many delights, not least of which is the idea that the imprisoned man may have a better time than the husband whom he is replacing, the longer introduction in So This is Paris creates a stronger sense of the relationships between the two married couples. In the earlier film the central relationship is placed under threat not by the wanton actions of the husband, but purely by his lack of interest in his marriage. He attends the artists’ ball with a male friend and flirts briefly with his maid, amongst others, and the wife’s pursuer is simply someone who has attempted to pick her up in the street. The more tenuous relationship between the characters makes for a less interesting comment on human behaviour and this seems to be something Lubitsch learnt from his experience in making The Marriage Circle. In this film, later remade as One Hour with You (1932), the central couple, very much in love, have their marriage threatened by the behaviour of their best friends. The unscrupulous girlfriend, involved in an unhappy marriage, tries all possible means to seduce her best friend’s husband, while the husband’s business partner is torn between loyalty to his friend and his love for his partner’s wife.

Commentators frequently mention the more conservative conclusions to Lubitsch’s American films when compared to their German counterparts; for example, contrast the ending of Ein Fideles Gefängnis, in which the gigolo has a wild time in prison and gets the maid, with that of So This is Paris, in which the wife’s pursuer ends up on a chain-gang. Yet this conclusion is not as accurate as it may first appear. ‘Conservative’ endings can also be seen in Lubitsch’s German comedies. In the German I Don’t want to be a Man (1919), the young woman realizes that the position of men in society is not as desirable as she imagined and so she reverts back to female dress and female stereotype. The conclusions of both Ein Fideles Gefängnis and So This is Paris feature the husband being chastised and the marriage restored. More radically, at the ending of both So This is Paris and The Marriage Circle, the ‘other’ woman, still married and none the wiser, quickly finds another playmate.

This hints at the nonchalant attitude of many of Lubitsch’s characters towards sexual relationships and the frequently predatory nature of women (and men) in his films. Both of the married women in So This is Paris drop their pursuers as soon as they lose interest; but Dr Giraud quickly finds someone else. This woman may turn out to be his wife, but that is not the point. The male lead characters, especially in the earlier American comedies, have a great deal of boyish charm and lack maturity. This creates a sense of stasis within the marriage and allows the men to transgress social expectations (that is, become involved in extra-marital relationships). Initially the wife endures the husband’s behaviour but eventually she is required to punish ‘the naughty boy,’ restoring the moral ‘code.’

Stylistically, the greatest difference between Ein Fideles Gefängnis and So This is Paris can be seen in a comparison of their ballroom scenes. In the German film this scene is relatively restrained. The pace of the editing and the general style of the sequence is similar to the rest of the film. The dancing, although lively and realistic, is conventional and unremarkable for a 1920s dance scene. By contrast, the American ballroom scene explodes with vitality. Unsurprisingly, this scene is frequently remarked upon by film critics when discussing So This is Paris. Here Lubitsch’s experimental impulses, if he ever had any, are given full expression. The sequence looks like an excerpt from a German experimental short of the period, not unlike the works of László Moholy-Nagy. Although silent, the film appears to come alive with sound (this sequence may be the closest the silent cinema came to expressing the sense of sound). The scene opens with a sea of dancers, dwarfed by giant legs, swirling to the Charleston, waving their arms in unison. As the scene develops the camera angles begin to tilt slightly, creating a sensation of mild intoxication as the editing rhythm builds. The revellers are inter-cut with shots of the all-black jazz band and the bare legs of the female participants. The scene culminates in multiple superimpositions and a kaleidoscope effect suggesting the heady exhilaration of the dancers. The scene ends when the film cuts to Giraud’s wife, sitting at home, with her legs swaying in time with the live radio transmission of the music from the ball. This piece of bravura filmmaking is correctly recognised as one of Lubitsch’s greatest cinematic moments.