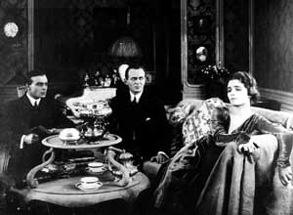 As a party of aristocrats gathers at the Vogelöd family manor house for a hunting weekend, the uninvited arrival of Count Oechst (Lothar Mehnert) interrupts their plans. While rumours persist that the urbane and disdainful Oechst may have murdered his own brother (Paul Hartmann), social discomfort increases further when the Baron (Paul Bildt) and Baroness (Olga Tschechowa) arrive, as she is the recently remarried widow of Oechst’s brother. When the Baroness’ confessor, Father Faramond (Victor Blütner), unaccountably disappears, the villa becomes the arena for separating truth from lies, via two dreams and two flashbacks, plus multiple deceptions, accusations and confrontations.

If the traditional English-language title (The Haunted Castle) suggests the supernatural, the film itself eschews goblins or golems in favour of the hypnotic unfolding of a moral horror. Although the identity of the murderer can be predicted, what’s unpredictable is the dream-like intensity that Murnau builds from the restrained acting and refined staging, where again and again characters move out of the depths toward the foreground, like profound upwellings from the subconscious.

Though this counts as Murnau’s ninth film, the first person camera eye and sweeping movements innovated in Der Letzte Mann (1924) still lay in the future. With none of the flashing lights, and extravagant tracking shots of the later films, Schloss Vogelöd offers a different clarity, its subtly unsettling images resonating especially with its immediate successor, Nosferatu (1922), cinema’s definitive vampire film.

Where Nosferatu externalises mortality into a figure of horror, Schloss Vogelöd finds the evil internalised, condensed into disturbing tableaux, and punctuated by reiterated establishing shots of the manor house. Though lacking Nosferatu‘s formal markers of speeded-up time and negative images, the film evokes the same oppressive dread in a powerful shot as a carriage hurtles over a windswept hill.

Confined within the stifling interiors of the villa, the camera escapes outdoors only for a lyric interlude with children, and again during one flashback. Despite our initial relief, the cold sunlight bathing this pastoral world proves no more comforting than the lunar light of Nosferatu, and Murnau’s unblinking concentration on the vacant horizon produces unnerving landscapes. Describing Nosferatu, Gilberto Perez pinpoints an effect that is also present in Schloss Vogelöd: “persistent long shots that at first glance would seem to reveal everything yet leave everything imprecise, hovering on the brink of nothing…”1

Despite the short shooting schedule of 16 days, Murnau’s scrupulous attention to detail and his theatrical training with Max Reinhardt elicited engagingly natural performances, with actors’ gestures appearing to rise from within rather than being mimed from without. In her first film role, Olga Tschechowa notably conveys the gravity of having witnessed horror. The Russian-born actress, the niece of the playwright Anton Chekhov, would later produce memorably sophisticated performances in Moulin Rouge (E.A. Dupont, 1928) and Liebelei (Max Ophuls, 1933), and would direct her own film called Der Narr, seiner Liebe (The Fool and His Love, 1929).

The source material for the film handed to Carl Mayer, Murnau’s collaborator on seven films, resulted from a business partnership between the Decla-Bioscop studio and the publisher Ullstein to produce movie versions of its adventure tales. Schloss Vogelöd was a novel “being serialized… The premiere took place just before the last installment appeared”2. As the pioneer of the Kammerspielfilm, the intimately scaled “instinct” drama, Mayer pared away all the elements traditionally called “cinematic” – the operatic indulgence of passion and action – to distil a chamber study that articulates the characters’ moral tensions.

Rather than explaining every step of the plot, Mayer leaves us to infer the buried desires of the characters. The resulting abstraction seems uniquely appropriate to silent films (dialogue would necessarily force the story to a more literal plane of mundane social interaction), and paradoxically, heightening the universality of the emotions proves more cinematic than any routine action.

All the plot specifics that Mayer had pared away in order to concentrate on guilt and its expiation were later restored in a pedestrian remake of Schloss Vogelöd (Max Obal, 1936), which spelled out the motivations and factual back story – the brothers’ rivalry for the woman, a forged letter, betrayal with a servant girl – thus robbing it of the suggestive mystery and psychic conflict of Murnau’s more interior world3.

Immediately after the Baroness confesses that her marriage was not idyllic, revealing that she longed for “something wicked”, Murnau inserts two unexpected dream sequences implying the release of repressions. In the first, one of the guests lies asleep when, from off-screen, the elongated fingers of a hand penetrate the frame, reaching into the room to pull the screaming sleeper from the bed through the window. This lateral invasion, like Nosferatu’s hands extending over his victims, looks like a foreshadowing of the vampire, a visual strategy seen again in Tabu (1931) when the prow of the fatal ship bisects the frame. This shocking eruption of expressionist imagery literalises the story’s nightmare of guilt, while the second dream proves no less unrealistic, a burlesque fantasy wherein a kitchen servant enacts his suppressed urges to slap his boss and eat his fill.

In Murnau’s aesthetic of long shots that stress isolation and enclosure, the characters seem to fall into elegant compositions as if by chance. One striking image, lasting just five seconds yet called “one of the most beautiful pictures Murnau ever created” by his biographer Lotte Eisner (and much remarked on by contemporary critics), wields a baffling symbolic power4. In a large room, the Baroness and Baron are separated as far as possible, pressing at opposite edges of the frame. Between them, placed deeper in the background, sit two rectangles of light, apparently two parallel doors, perhaps thrown open by the revelations of the night. In the context of a confession preceding the shot, this space feels charged with fatalism, the two rectangles suggesting coffins side by side. However theatrical the conception, Murnau’s suspension of time makes it unquestionably cinematic, despite the absolutely stationary camera.

Through much of the film, the characters seem united by tensions invisible to the audience, yet the intensity of the emotions and their visual representations demand an involvement from the viewer beyond that of a simple voyeur. What Perez noted about Nosferatu holds equally true for Schloss Vogelöd: “We are brought – and this is essential to the distinctive operation that gives Murnau’s work its unity – into the space of the picture, drawn as if by the pressure of a vacuum into a scene which was somehow incomplete without our presence”5.