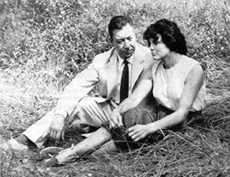 Before the war my way of participating in this universal concert was to try to bring a voice of protest… Today, the new being that I am realises that it is no longer the time for sarcasm and that the only thing that I can bring to the illogical, irresponsible and cruel universe is my ‘love’.

Evoking Édouard Manet’s 1863 painting of the same name, Jean Renoir’s Le Déjeuner sur l’herbe (Lunch on the Grass) explores a rather strange subject. Where Manet’s epochal work created a furore for its translation of a “classic, pastoral subject” into contemporary terms, Renoir, for the purposes of satire, fast forwards to the future – a unified Europe on the verge of accepting its scientific destiny in artificial insemination – only to reaffirm the classical. (2) In seeking to infuse the screen with the spirit of his ‘new being’ Renoir adopts an Arcadian devotion to love & beauty: less Manet than Matisse, less ‘Olympia’ than Joi de vivre.

As a film by Renoir, Déjeuner is perhaps most distinguished by the method of its production. Along with his earlier The Testament of Dr. Cordelier (also 1959, but not released until after this film), Déjeuner was shot with a multi-camera set-up – each sequence filmed in an uninterrupted take, with between three and eight cameras capturing the action. In earlier Renoir films, as with most of the “dominant cinema,” performances were fragmented between different camera set-ups and subsequently reconstituted. (3) The multi-camera technique, familiar to television production but rare in film, allows (or perhaps forces) the actors to “play for themselves,” as Renoir put it, rather than the camera. (4)

This technique also affords a greater freedom when editing to cut within a scene without disturbing continuity. There is a genuine fascination attending this process. What we are watching in ‘reality’ is what so many films work to create by illusion: the continuity of the screen and the continuity of the world it represents are one in the same. Intriguingly though, this liberty seems to lead to a greater sense of stasis. As camera positions are fixed, limited, it becomes inevitable that cuts will return to familiar framings, again and again. Ultimately, this ensures that diegetic space, even while assuming an unusual ‘one-ness’ with the pro-filmic, is embalmed within a proscenium at once both unseen and impregnable. Space is contained rather than revealed. The decentralised perspective of the camera ‘eye’ is not used to cubist effect, nor is there any Duchampian gesture toward Nude Descending a Staircase. Instead there is a clear Euclidean solidity of form; a delineation of foreground and background more reminiscent of the academic tradition than Impressionism.

It is to Impressionism though that most references are made when Déjeuner is discussed. It’s not that the film owes an artistic debt to that most canonised of art movements – there is no pretence to an avant-garde conception of the two-dimensional screen – but rather that, shot as it was in and around Les Collettes (once the home of Renoir’s father, Auguste), the film acts as a filial homage. In a particularly revealing bathing scene Nenette (a pictorially prefect Catherine Rouvel) presents a virtual tableau vivant: a Cytherian colour harmony. Embodying in this moment Renoir père‘s holiday impressionism, Nenette also embodies a Dionysian excess: both innocent and knowing, under the sign of Diana, she encapsulates Déjeuner‘s appeal to a human spirit uncowered, not by the nostrums of science per se, but by the cult of (scientific) development.

Renoir’s humanism, which in relation to The River (1951) has been described as “almost spiritual,” is put to a more prosaic purpose in Déjeuner. (5) Although the film has been described as a pamphlet, there is little attempt to enter an argument. (6) Humanist precepts are presented as self-evident truths: commonsense, reasonable. Consequently, the film’s considerable comedy is generated by its play with the sophism lying at the heart of sophistication. Déjeuner is at root an experiment. Like the experiment of artificial insemination contained within the narrative (which both presages and contrasts recent developments in cloning), it is one most valuable not for the new territory it charts, but as the unusual provoking the insular, for its illumination of the old.