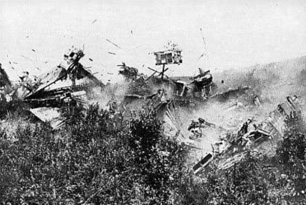 René Clément was once one of the brightest hopes of French cinema, an innovator who seemed at the vanguard of a new realism. Like Rouben Mamoulian – an innovator of forms within ‘Hollywood’ whose work has also unjustly suffered critical neglect – Clément’s star has waned significantly since the mid-1950s, his reputation diminished by the attacks of several critics of the nouvelle vague (though not André Bazin who championed several of Clément’s films, particularly the London-shot Monsieur Ripois [1954]), as well as the weakness of many of his later films. It is now difficult to remember that Clément once had an enormous critical and popular reputation, his first films winning awards at both Cannes and the Oscars and works such as Jeux Interdits/Forbidden Games (1952) and La Bataille du rail gaining significant popular success.

Clément’s first feature film, La Bataille du rail, is both a characteristic and anomalous work in the director’s career, pointing forward to the intimate detail of many of his best films while drawing on the distanced ethnography of his pre-war work in documentary. It is both a highly charged dramatic fiction, complete with an almost symphonic score, and a distanced, observational work, drawing upon the conventions of documentary and the heightened ‘realism’ of actual locations, the integration of documentary footage, the reconstruction of recent historical events (the actual “battle of the railways” which raged in 1944), and the casting of non-professional actors. Several critics have made connections between Clément’s groundbreaking film and the work of Italian neo-realists such as Roberto Rossellini and Vittorio de Sica. In style and intent La Bataille du rail does have an equivalence with the contemporaneous works of Rossellini – Open City (1945) and Paisa (1946) – particularly in its patented combination of an intense immediacy and a somewhat distanced observation, the placing of characters within the detail of historical circumstances, and the reliance upon the close correspondences between the performers (often actual railworkers or Resistance fighters in Clément’s film) and the roles that they play. Nevertheless, La Bataille du rail – despite an extremely visceral battle scene between Resistance railworkers and German troops on an armoured train – does not attain the emotional intensity or the level of engagement attached to the character played by Anna Magnani in Open City, for instance, relying instead on an almost Griersonian documentary-like form which has links to the ‘immediate’ dramatic recreations of Humphrey Jennings’ Fires were Started (1943), and an intermittent use of montage which echoes such Dovzhenko films as Arsenal (1929). (Soviet cinema seems to have been a general influence on many aspects of the film’s composition.) The film also recalls the symbolisation of the locomotive in Renoir’s great poetic-realist work, La bête humaine (1938). There is no doubt that La Bataille du rail is an exceptional and even groundbreaking film, but its influence on subsequent French cinema, like much of the rest of Clément’s work, is minimal. The film is perhaps echoed in Jean Mitry’s more abstract Pacific 231 (1949), but the increased naturalism of the nouvelle vague (and its great precursor, Melville), as well as the burgeoning Left Bank documentary movement (Resnais, Marker, Varda, et al) owes little to it. In many respects it is a cul de sac intimating a brief moment of possibility for the emergence of a French neo-realism. A movement that could reflect the complex, schizophrenic picture of a liberated, ultimately victorious, but divided and also defeated nation.

La Bataille du rail was initially conceived as a short, and its unusual aesthetic and technical characteristics are perhaps the result of the greater freedom allowed to short and documentary production in the highly cloistered French film industry of the time. This movement from short to feature enabled Clément to become one of the youngest French feature filmmakers of the period in an industry still dominated by those who had begun their careers before the war (in contrast to true mavericks such as Bresson and Melville, both of who struggled to get their immediate post-war films made). Yet this quick movement into relatively mainstream feature production ultimately stifled the realist innovations La Bataille du rail suggests. Despite the beautiful detail of films like Jeux Interdits, and the innovations (often technical) characteristic of many of the director’s subsequent works, a sense of immediacy – the explicit linking of fiction to documentary cinema – was lost. Clément was to some extent a filmmaker out of his time, a young director neatly folded into the cinéma de papa reviled by youthful critics like Truffaut. Even a casual viewing of La Bataille du rail suggests that Clément could have suffered a very different fate.

La Bataille du rail was a massive success in France, and was partly responsible for broader industry recognition that war-based subjects were one of the things that post-war French audiences wanted to see (this is probably more significant than its iconoclastic technique in this regard). So what attracted French audiences to the film so soon after the end of the war? I think that the film’s success was partly the result of its stoic triumphalism, its portrait of the seemingly widespread small and subsequently larger acts of resistance perpetrated by the French people under German occupation (in this regard it may have been seen as a kind of hagiographic fantasy or wish-fulfilment). Based on actual events and relying on the testimony and memory of many of those involved in ‘the battle of the railways,’ the film focuses on the period just prior to and after the Allied landings at Normandy, culminating in the liberation of France and its strategically and symbolically significant rail network.

La Bataille du rail opens in a manner resembling a more straightforward kind of documentary, detailing the cumulative everyday acts of resistance possible within a rail system tightly controlled by the Germans. The film also makes its allegiances and breadth of scope known immediately: the first shot of the film shows a sign – with German writing on the top and the French translation relegated to below – which declares that Jews are not allowed to cross over into the occupied zone; subsequent shots demonstrate that a broad network of French civilians – railworkers and passengers – are significant both centrally (they actively sabotage) and peripherally (they just allow things to happen around them) to the broader program of resistance. As the film progresses it concentrates more and more on more extreme and violent acts of sabotage, the battle being joined to open up a second or third front against the occupying Germans.

Clément’s documentary-like approach means that few characters are clearly delineated, while the idea and practice of resistance is elevated to the status of a kind of nationalist fugue, a combination of both armed conflict and simple, cumulative everyday actions. Thus, the immediate appeal of La Bataille du rail – itself a kind of hymn – perhaps lay in this portrait of a broad practice of resistance, and offered a necessary salve to the much more troublesome idea and reality of collaboration. Nevertheless, though often poetic in its combination of man and machine, action and landscape, La Bataille du Rail does not attain the complexity and more nuanced vision of resistance to be found in Melville’s great trilogy: Le Silence de la Mer (1949), Lêon Morin, Prêtre (1961) and L’Armée des ombres (1969). But it does contain moments of great power. The sequence where ‘random’ workers are taken out to be shot in retaliation for their increased acts of sabotage, is a brilliant combination of image and sound, focusing on small details of mise en scène and expression while the clamour of the soundtrack intimates both the terror meted out by the Germans and the protest of the railway itself (the engines seem to speak up in protest in an aural equivalent to the montage effects found in some Soviet cinema). This moment in La Bataille du rail occupies a space somewhere between the dumping of the partisan’s bodies in Paisa‘s final moments (which is much less poetic but more brutally honest) and the devastating, but operatic execution scene in Leone’s A Fistful of Dynamite/Duck, You Sucker (1972).

All of the elements I have discussed make La Bataille du rail a fascinating, if slightly difficult film to place when situated in a contemporary context. The film’s portrait of the French-German rail system (and the way it questions the notorious efficiencies of this network) also has interesting resonances with films like John Frankenheimer’s The Train (1965) – which stages a bloody track-side battle over masterpieces of modern art being ‘looted’ from Paris at the time of the Liberation – and Claude Lanzmann’s Shoah (1985) – where key evidence of the Holocaust is traced to the meticulous freight and timetabling records of the Third Reich. The knowledge of what such transports were sometimes used for grants the actions of La Bataille du rail an even greater gravity, its opening shot an indirect, almost unconscious reference to the ominous visage of the endless trains which steamed into places like Auschwitz and Dachau. The final images of the film – where the railways are liberated – indicating a triumphant but still slightly melancholy reappropriation of the tainted machinery of modernity.