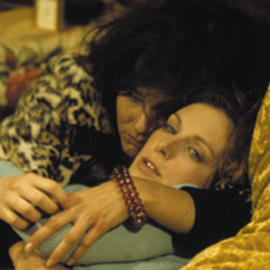 Too often, it seems to me, Robert Altman is valued for his riffs on genre – whether it be the war comedy (M*A*S*H [1970]), the Western (McCabe & Mrs. Miller [1971]), the detective story (The Long Goodbye [1973]), or the Agatha Christie-style murder mystery (Gosford Park [2001]) – and undervalued for his more direct and personal films, the ones which are least self-aware of other movies and most interactive with real life. I don’t want to fall into the same trap as those who under-rate that side of Altman by underrating myself the titles I’ve just rattled off – each and every one of which I love – but simply make the point that to prioritise this strain of Altman above others is to cut oneself off from what may be the purest expressions of this great director’s particular vision of life.

California Split belongs to this side of Altman (the only ‘genre’ it could be said to belong to is the ‘gambling movie’) as well as another: it joins Images (1972), A Perfect Couple (1979) and Quintet (1979) as one of the least seen and most infrequently discussed of all of his ’70s works. Nevertheless, it seems to be on its way to something like a canonisation thanks to some recent Altman retrospectives around the world (though it still remains, unforgivably, unavailable on video in the United States); while the responses I’ve read – through e-mail lists and personal correspondence – from Altman fans who’ve just seen it for the first time recently usually borders on the effusive. I myself only saw it for the first time last year and suffice it to say that I was so taken with its rough-and-tumble humanity that it was the one Altman film to figure in the Top 10 of all-time list I submitted to Senses of Cinema.

This is a film about gambling, a metaphor-for-life which seems to have a particularly compelling pull for Altman. Altman, a self-confessed recovering gambler, returned to the theme with Quintet – a sci-fi picture which stands as one of his strangest and most gripping films – and increased the stakes: play the game or face death. Quintet was set during a future Ice Age in a world with dwindling resources; who lived and who died depended on participation in the game of the title. There’s nothing so novel going on in California Split – a wholly naturalistic picture set in the 1970s – and yet its characters feel just as lonely and pathetic (and lovable) and the outcome of the games they play just as live-or-die important.

California Split was the third collaboration between Altman and actor Elliott Gould, here playing Charlie, the aggressive and impudent half of the two friends who are the film’s focus; George Segal is the more buttoned-down, but despondent Bill. (In Altman, even friendship is contingent: the two meet by chance at a casino and stick together only on a superstitious hunch that they may bring each other good luck.) In his three major films with Altman (the other two are M*A*S*H and The Long Goodbye), Gould came closer than any other actor, perhaps, to, in his loose, uncontainable acting style, embodying in physical form the qualities which help constitute the Altman vision: sometimes committed to ideals, sometimes not and almost always a little sarcastic.

In his capsule review of California Split written for the Chicago Reader, Don Druker observes, “…the more we realise that to love characters the way Altman loves his, you have to see them turned completely inside out.” Indeed, I can think of few directors more compassionate towards their characters than Altman, but like Stanley Kubrick, his films are so rooted in honesty and satirical portraiture that many observers miss (or choose to ignore) the abundant generosity behind the lens. Though I generally reject the notion that Altman is an excessive director or that his films lack focus or direction, he is indulgent in one way: to his characters, for he loves them with, perhaps even for, their warts and flaws and desperation.

We follow Bill and Charlie through their misadventures, games, pick-ups, and pranks and we come to love them. One of the film’s most remarkable achievements is to gradually redefine what we hope for them: what seems like an outcome to root for at the film’s outset – Bill making a big win in Reno – seems drained of all meaning when we actually experience it at the film’s end.

What’s more, for a director who is constantly being accused of hovering above his characters in ‘snarky’ contempt, California Split is a remarkably self-critical film. It doesn’t require any deep reading of the work to recognise that Altman undoubtedly sees himself in Bill and Charlie and acknowledges his own complicity in their struggle with an addiction.

The director who pursued California Split most aggressively before Altman became attached was Steven Spielberg. While I don’t want to make a snap judgment about what kind of film Spielberg would have made – indeed, his early work (eg Duel [1971], The Sugarland Express [1974]) showed just as much willingness to portray desperation and unhappiness as his most recent work does; it’s only mid-period Spielberg which seems to me sappy or unambiguously sentimental – I think it’s safe to say that it would have been a considerably different film from what Altman made. The very fact that an atmosphere existed in Hollywood where Altman could have access to properties being pursued by Spielberg – a player and company man even before Jaws (1975) validated him as a money-making player in the eyes of the studios – is astonishing.

But it’s some measure of the greatness of this film that this fact is perhaps the least of the astonishing things going on in California Split: Altman’s astonishing mise en scène – contemplative of every level of interaction within a room, a bar, a place – has rarely been put to more revelatory or personal ends. It’s a masterpiece.