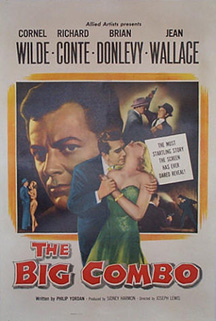 You have to love a film that has one of its central characters, criminal kingpin Mr. Brown (Richard Conte), insist throughout that “First is first and second is nobody.” It’s the kind of belligerent, aggressively individualistic mantra characteristic of the tough male characters who dominated the American film noir canon of the 1940s and 1950s. Philip Yordan’s script for The Big Combo is loaded with equally pithy expressions of masculine bravado, but as with many a classic noir film, these over-assertions of masculine potency are obliquely undermined by elements of characterisation, visual style and narrative structure.

Neither a critical or commercial success at the time of its release, Joseph H. Lewis’s The Big Combo is now generally regarded as one of the defining classics of the American film noir cycle. Principally recognised for his contribution to that cycle, Lewis got his first substantial break directing B-Westerns for amongst others, Universal Studios. Even at this early stage in his career, Lewis established himself as a director with a distinctive vision. His fondness for deploying the iconography of the Western in idiosyncratic fashion – framing shots through the spokes of the nearest wagon wheel to enliven the mise en scène – earned him the nickname ‘Wagon Wheel Joe’ and the opprobrium of editors at Universal who deplored the strategy. (1)

Having served his apprenticeship in the Western genre, Lewis hit his stride directing a series of influential noir films from the mid-1940s to the mid-1950s. For many film American historians, this decade of his career sealed his reputation as “one of our most important postwar directors.” (2) Lewis’s first critically acclaimed noir work, My Name is Julia Ross (1945) was followed by So Dark the Night (1946) and The Undercover Man (1949), but it was another 1949 release, Gun Crazy, which established his cult director status.

The relationship between the young, criminal lovers on the run in Gun Crazy has been described as “one of the most purely sexual in film noir.” (3) The unabashed, explosive combination of sex and violence in Gun Crazy represented an abiding preoccupation in Lewis’s work, a preoccupation explored in definitive fashion in his late, great noir classic, The Big Combo.

As with another signature 1955 noir work, Kiss Me Deadly (Robert Aldrich), The Big Combo opens with a striking scene of a terrified woman fleeing. Revealed as Susan Lowell (Jean Wallace), she is both kept woman and emotional captive of criminal boss Mr. Brown. Brown’s shadowy Bollemac Corporation comprises an extensive network of criminal business interests, the ‘big combo’ of the film’s title. Both Brown’s corporation and his beautiful girlfriend attract the attention of dedicated detective Leonard Diamond (Cornel Wilde). Diamond justifies his obsessive surveillance of Susan as part of his determined effort to bring down Brown’s ‘combo,’ but neither his criminal counterpart nor superior, Captain Petersen, are convinced.

Delirious following a drug overdose, Susan lets slip the name Alicia, providing Diamond with an enigmatic lead which he pursues with fanatical zeal. The police investigation becomes increasingly compromised – and the body count escalates – as Swedish antique dealers, Italian-American mafia connections and ex-wives surface. When Brown and Diamond finally face off in a fog-bound aeroplane hanger, the outcome of the showdown is ultimately determined by the real source of their mutual antipathy, Susan Lowell.

While Lewis is invariably described as a low budget specialist and B-movie master, The Big Combo is notable for what one critic describes as its hybrid, A/B-film status. (4) While constrained by the tight budget typical of the B-noir form, the production was distinguished by a number of elements more characteristic of the A-format. Despite its limited locations and lack of action-oriented scenes, John Alton, “undoubtedly film noir‘s greatest cinematographer,” gave the film a distinctive, high production appearance. (5) The impressive cast, including actors of the calibre of Richard Conte, Cornel Wilde and Brian Donlevy, enhanced the film’s potential box-office appeal.

But perhaps most tellingly, the hybrid nature of The Big Combo is registered in Philip Yordan’s ambitious script. The heady mix of sex and violence combined with more ‘serious’ themes around organised crime and corporate corruption, represented an unusual blend of B-movie ‘exploitation’ elements with the weightier subject matter of the A-film. (6) Interestingly, and perhaps as a result of both budgetary and censorship constraints, Yordan’s dialogue-driven script ensured the exploitative elements in the film were primarily played out at a verbal rather than physical level. (7)

But it is precisely the ‘exploitative’ elements, the overt and implied expressions of sex and violence, that give The Big Combo its tensile and decidedly contemporary appeal. Distinguished by complex plotting, the film’s multiple relationships are defined by varying degrees of sexual obsession. From the amusingly fractious relationship between Brown’s conspicuously gay hitmen Fante (Lee Van Cleef) and Mingo (Earl Holliman), to Diamond’s quasi-sadistic dealings with both Rita and Susan, Lewis makes clear that The Big Combo is as much concerned with the dynamics of power, money and sexuality, as with the nexus between business, crime and the forces of law and order.

As the charismatic criminal kingpin, Mr. Brown represents the most potent fusion of obsessive fiscal and sexual interests. Brown spells out his personal credo in early scenes: “First is first and second is nobody!” Rich and powerful, he seems to be motivated less by personal ambition or financial considerations, but more particularly by other advantages his position confers – specifically, the company of desirable women.

Brown’s pep talk to a young boxer backstage consists of combative words about harnessing the killer instinct and dominating other men, as this is what women fundamentally respond to: “The girls will come tumbling after you.” Brown’s homily about men with power, and the women they attract, is repeated insistently in various forms throughout The Big Combo.

Brown’s previous boss, now subordinate Joe, is by contrast ‘soft’ and ‘a little man.’ In one of the increasingly acrimonious exchanges between Brown and Diamond, the former observes of his nemesis: “Only problem with you is, you’d like to be me – my organisation, my influence, my fix. You think it’s the money, its not.” Brown shrewdly identifies Diamond’s ambivalent personal and professional motivations: “You’re slow, steady and intelligent, with a gun under your arm and a big yen for a girl you can’t have… first is first and second is nobody.”

While Brown asserts the seductive pull of men with power, other elements in The Big Combo work to contradict this proposition. Diamond’s liaison with nightclub dancer Rita is a case in point. Rita’s initial, offhand attitude to Diamond masks a genuine affection for him. In one telling remark, she single-handedly refutes Brown’s limited view of gender dynamics: “A woman doesn’t care how a man makes his living, only how he makes love.”

Furthermore, despite her lengthy relationship with him, Susan eventually betrays Brown. Giving important evidence to Diamond, she is instrumental in Brown’s eventual arrest. While the film’s denouement is conditional, with Diamond and Lowell disappearing into a gloomy, fog-bound future, it is an ending that nevertheless asserts Susan’s choice of the ambivalent attractions of Diamond over the powerful, unreconstructed masculinity of Brown.

Unfairly neglected on its initial release and notorious for its provocative love scene implying oral sex – arguably a Hollywood first – The Big Combo has gained increasing stature since its critical ‘rediscovery’ in recent decades. Distinguished by inspired direction, great performances and distinctive cinematography, Lewis’ film is ultimately most intriguing for its trenchant, contemporary exploration of the corrosive effect of power and money on sexual politics.