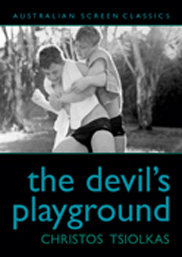 “Australian culture,” according to Christos Tsiolkas, “treats reticence as a virtue” (36). No danger of that here. Better known as a novelist, he’s the kind of critic who informs us that after his first teenage viewing of The Devil’s Playground (Fred Schepisi, 1976) he “rushed to the cinema toilet, banged the bolt and came spraying come across the floor and door” (16). Too much information? Maybe, but this is more than confessional one-upmanship. On principle, Tsiolkas refuses to separate sexual from aesthetic pleasure, pointing out that eroticism can reside in form as well as content, in camera movements and music as well as “photographed flesh” (16). At the least, his example usefully reminds us that on one level all criticism is finally ‘about’ its author, impelled by personal associations and fantasies which are normally made public only in disguised form.

Structured as a kind of case history of the author’s changing responses to Schepisi’s film from the 1970s onwards, The Devil’s Playground (the patchy but interesting first instalment in the new Australian Screen Classics series) is as much memoir as critical monograph. Yet if here, as in all his work, Tsiolkas makes a point of stressing his personal experience as the queer child of working-class Greek migrant parents, the point isn’t that this experience is more singular than anyone else’s, but that it’s led him to view all identities as problematic and contingent. Hence the political importance of making your antecedents and loyalties public: letting people know where you’re coming from and where you stand.

Or that’s the theory. In fact, I can’t help feeling that Tsiolkas’ compulsive candour stems from something deeper and more agonised than either show-off bravado or identity politics. With its apocalyptic imagery and sexual squalor, Tsiolkas’ 1999 novel The Jesus Man suggests that his nearest cinematic equivalent wouldn’t be Schepisi but perhaps Scorsese (mentioned in the novel) or Abel Ferrara. Not that he’s in the league of those two or anywhere near it, but despite an occasionally groping style he can be similarly unflinching when it comes to the violent and base side of male sexuality, as if telling the whole truth would somehow lead to absolution.

Still, even if I’m right to suspect that Tsiolkas is more racked by religious angst than he wants to admit, the more tortured side of his writerly personality rarely comes through in this new book. While he writes in cheerfully graphic detail about his burgeoning sexuality as a young teenager, he’s much more guarded about his apparently intense religious feelings at the same age, though he does mention the “spiritual terror” (8) he experienced while watching The Seventh Seal (Ingmar Bergman, 1957). Although The Devil’s Playground is set in a Catholic seminary where the Christian Brothers and the teenage boys under their care struggle with sins of the flesh, when Tsiolkas sits down to collate his memories of the film the initial list includes “nothing about faith and spirituality” (3). Like Schepisi as a director, the author presents himself as firmly on the side of the physical, sensual world – though he’s also aware of an implicit pantheism in the landscape of The Devil’s Playground, which “seems to speak of a spiritual richness imbued in nature itself” (15).

In concentrating on his own experience as a viewer, Tsiolkas makes little attempt to situate the film within the particular cultural contexts that gave rise to it – say, the 1970s Australian film revival’s characteristic preoccupation with sexual repression and release, or the broader traditions of pantheism and romantic vitalism present in 20th century Australian culture. It’s as if filmic production and reception occurred on wholly separate planes – so Tsiolkas can discuss how his viewing of The Devil’s Playground helped to form him as an individual, while remaining largely blank about how his sensibility and the film’s might relate to each other as points on a historical continuum (a blankness also evident in his characterisation of the mid-’70s as a period of “reticence and silence” (50) concerning sexuality). While as a contemporary viewer he can point to some obvious absences in the film (such as its refusal to broach questions of politics, ethnicity, or homosexual desire) he’s much less well-equipped when it comes to exploring the historical reasons for these absences.

What Tsiolkas does do very well in this book is to convey what it feels like to watch The Devil’s Playground (which I also regard as a classic) while at the same time making us see the film anew through his eyes. It’s fair to say that as a critic he’s better at identifying broad patterns of theme and imagery than at close stylistic analysis. Thus he’s alert to the “intimate rendering of skin and texture” in the film (15), but less than specific about the editing patterns Schepisi uses within individual scenes to make this tactility present to the viewer. But if his language can be vague about matters of craft, it’s always animated by the look of love:

Seeing again the scenes among the students, I was again knocked out by the small scene in the woodshed where Tom and Waite fiddle nervously with their hands. The talk of erections and dick size is smutty, they giggle and lop off their words, but I don’t know of another more exquisite rendering of the way sexual energy literally seems to pour off a boy’s body … Whether naked in the water, running in their sports kits in the rain, at assembly or at rest, identical in the blue and grey of their uniform, their white flesh, the sheen of their eyes, their mottled blonde curls or their jet black Irish locks all seem to glitter, to be vibrant. Even though they are pockmarked, pimpled, clumsy and shy, when the light falls on them it reveals only beauty (17).

This kind of heightened descriptive writing might plausibly be considered ‘appreciation’ rather than criticism, though as stylistic performance it achieves more than the former term suggests. Throughout the book, Tsiolkas’ descriptive prose achieves its key aesthetic effects by borrowing and elaborating upon The Devil’s Playground‘s own thematic tropes, contrasting culture and nature, Christianity and implicit ‘paganism,’ spirit and flesh. Yet at the same time, Tsiolkas invokes his own personal experience as a way of undermining these easy oppositions – confounding straightforward understandings of sexuality as natural, and laying claim to multiple identities as hedonist and intellectual, heir to European history and outsider to mainstream Australian society. Yet despite all this, Tsiolkas’ verbal evocations rarely stray too far from what the film ‘wants’ to mean, aiming to complement rather than radically challenge its rhetoric (in terms of figurative language in criticism, this technique lies at the opposite pole from, say, Manny Farber’s systematically estranging use of metaphor).

There’s a strange, perhaps defensive section near the end of the book where Tsiolkas maintains that he “never quite got film theory” (57) since he doesn’t believe that this “mongrel” art can be “distilled to a pure model of effect and affect” (60). To some extent he’s obviously playing dumb here, but he’s also making a perhaps necessary case for the legitimacy of his critical approach. In contrast to what he sees as the aridity of much academic film theory, Tsiolkas praises canonised reviewers like Pauline Kael and James Agee for their “severe stripped-back language” and “poetic sparseness.” Betraying Tsiolkas’ frequent tin ear for prose, this is the most jaw-dropping passage in the book – I can think of many adjectives that might be used to describe Kael’s work, but “severe” and “stripped-back” are not among them. Still, with these and other swaggering American stylists, Tsiolkas stakes his claim on the strength of his individual perceptions, believing (rightly, in my view) that criticism is finally personal or it’s nothing.

Nothing is more personal about our relation to cinema than our sexual feelings for particular actors, and (as I’ve already noted) as far as Tsiolkas is concerned aesthetic responses and sexual ones are inseparable. The most interesting strand in the book traces the tension between the seemingly innocent, ‘normal’ sexuality depicted in Schepisi’s film and the queer desires of Tsiolkas as a viewer. There’s a certain paradox here, given that this is a writer who’s built his career on the practice of full disclosure, the imperative to admit to everything, no matter how shameful or scary. Get it all down in black and white: what you had for breakfast, what’s playing on your car stereo, the drugs you took and the people you had sex with. This overarching commitment to explicitness (in more than one sense) is both Tsiolkas’ strength as a novelist and his greatest creative weakness. Yet with this book, he pays tribute to a very different aesthetic: one that maintains its poise precisely by leaving certain things unsaid.

Maybe an awareness that some things are best left to the imagination helps to explain why Tsiolkas never quite ‘spells out’ a further paradox implicit throughout his book. On the surface, it’s true that The Devil’s Playground takes heterosexuality for granted as a healthy norm (one character declares that the isolation of the seminary makes it “a breeding ground for bloody poofters”). Yet the scattered, fleeting appearances of women in the film are invested with relatively little power, while images of pubescent boys – often partly nude, filmed in a manner that Tsiolkas gently and rightly calls “both erotic and chaste” (17) – are unabashedly offered to the viewer as a major source of visual pleasure. It’s tempting to suggest that the film’s seeming innocence concerning homosexual desire (outside the context of schoolboy hijinks) operates as a crucial form of discretion, guaranteeing the ‘innocence’ of its own gaze at the sexually responsive yet physically immature bodies of young Tom and his classmates.

These are dangerous waters. I’m not suggesting that The Devil’s Playground is secretly a gay or pederastic film: nothing so simple. Rather, it’s as though this story of male sexual awakening, which recurs again and again in Australian film and literature, automatically carries homoerotic implications which may or may not break through to the surface. Lacking a final, solid form, the current of desire that flows through The Devil’s Playground is depicted as by nature polymorphous if not necessarily perverse. It’s true, as Tsiolkas points out, that when overt ‘perversity’ appears in the film it’s stigmatised as the dark product of repression. Yet we can still legitimately ask: if desire resists the prohibitions imposed by religious faith, mightn’t it equally refuse to be contained within the limits of ‘normal’ sexuality, however broadly defined? Even as we congratulate ourselves on our superior tolerance, the question is still a troubling one. Sometimes reticence is a virtue. For still today there are desires that may not speak.