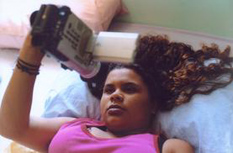 Dreaming in Motion (2002), a package of five short films commissioned by the Indigenous Unit of the Australian Film Commission and SBS Independent, showcases the work of five writer/directors, contributing a range of Aboriginal perspectives to contemporary Australian cinema. Shit Skin, written and directed by Nicholas Boseley, is a return home film which takes the form of an interrupted road trip to Central Australia, undertaken by a grandmother, Nina, with her grandson, Luke, in the driver’s seat. Alternating between Nina and Luke, Shit Skin deftly evokes the long-term impact of historical trauma as it affects a family over generations. The repetitive nature of traumatic experience becomes evident in flashbacks, delayed in time only to be unleashed by sensory experience. Memories of a ruptured childhood are provoked by the scent and touch and taste of place. Deliberately understating the melodramatic potential of Nina’s belated return (62 years after being taken away) the film enables a laconic revisiting of the past, at the same time drawing its characters forward into a more reconciled future. The pain of return impacts on Nina through the senses, transforming the meaning of both time and place. The scent of a twig from a tree, and the splash on her face of fresh water released from its hiding place under the gravelly desert sand, recalls Nina to her childhood self, awakening a sense of belonging which she has tried to deny to her grandson, Luke, “These people, they’re hopeless. I’m glad I was taken away.” When Nina and Luke address each other with rough affection as ‘half caste’ and ‘shit skin’ at the end of the film, there is a sense that the return to the original place of loss allows memory to settle into a less traumatised, more connected sense of belonging, of being able (as Jimmy Little sings over the closing titles) to “bring yourself home.” Shit Skin quietly, yet insistently, evokes the pain of return, and also its necessity, no matter how belated.

The presence of the past, and the necessity of return, are structural themes in Black Talk, written and directed by Wayne Blair. The film takes the form of a conversation between two cousins waiting to go into a funeral, sharing childhood memories, a sense of humour and feelings of loss and shame. Their affectionate bantering turns serious when Scott, who remained behind with his community, asks city-boy Tim where he will find his soul once his assimilated, consumer lifestyle has finished sucking it out of him. Tim’s strong ambivalence towards home resolves itself into grief as the two cousins enter the small, stone church for the funeral. We realise with a shock that this funeral is Scott’s and that the conversation outside the church took place between the living and the dead. Tim has returned for a final conversation with Scott. We learn that despite his material success Tim knows he’s been in the wrong place, however, we are left to guess at the reason for Scott’s early death. The film ends with a sense that the past is never dead, but alive and waiting for recognition.

In Flat, written and directed by Beck Cole, the routine, everyday present where ‘nothing happens’ is brought into view, literally, through the viewfinder of a digital camera given to 15-year-old Marnie by her unreliable dad, glimpsed briefly through the video lens at the local TAB. Flat invites us to contemplate the difference between the unblinking gaze of the film camera as it frames Marnie on a swing against a brick wall, and the softer, more intimate video image as Marnie picks out an old woman sitting on a chair or a neighbour wrapping beer bottles in newspaper before putting them in the garbage bin. This slice-of-life film shares little of the feminist preoccupation with image and identity, even as Marnie lies on her bed and turns the camera on her own face and body. Instead, the final telling image is of a sign painted on the wall of the pawnshop, “loved goods go cheap.” This mute comment on Marnie’s circumscribed world is recorded as the last image on the videocassette before she embraces the inevitable: pawning the video camera to cover her father’s losses at the TAB. A quality of stoicism, evident in Marnie’s laconic exchanges with her little sister and a casual boyfriend, pervades the film, pointing to an austere ethic of survival as the bedrock of daily life. A glimpse of the desert landscape captured on video through the bus window is the only indicator of a time and place whose vast scale is lost to modernity, a loss of vision and connection signified by the ubiquity of film and video images. 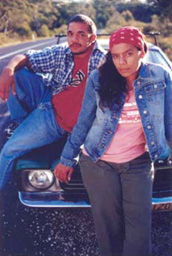 This pervasive sense of loss is undercut in all the films by a dry sense of humour, so dry you can hear the grass crackle underfoot. The final two films in the package bring this crackling humour to the fore, confronting modernity’s conundrum of sex, gender and race with shrewd wit. Turn Around, written and directed by Samantha Saunders, is a gentle romantic comedy which plays with the genre’s central device of recognition/misrecognition between ‘right’ and ‘wrong’ partners. A feminist twist gives the controlling moves to the woman who educates the man into recognising her in her own right. A road trip takes the would-be lovers on three detours. Each stopover educates the man into essential knowledge of the woman’s qualities (respect for elders and culture; sensual affinity with nature; cool control of the pool table) which are different from the glossy magazine appeal of his fantasy woman. When she drives off, leaving him to pursue his fantasy, or not, he has to make his own way home. In an act of comic recognition he returns to wash her car, acknowledging her wheels as the vehicle of his education into sexual equality. Turn Around replaces romantic comedy’s upper class settings (of city nightclubs, designer apartments and ocean liners) with country pubs, modest houses and a Ford with radiator problems. This switch in setting expands the genre, at the same time enlarging the frame through which Aboriginal experience becomes recognisable in cinema.

The four films above undermine the familiar portrayal of Aboriginal characters in cinema as objects of an ignorant, investigative or sympathetic white gaze. Non-indigenous characters are side-lined in favour of the experiences and perceptions of Aboriginal characters. The final film, Mimi, written and directed by Warwick Thornton, breaks this pattern by engaging directly with the whiter-than-white world of the cosmopolitan investor in Aboriginal art. Mimi begins as a send-up of yuppie ignorance and consumerism, then quickly turns into an acutely observed comedy-horror film, featuring the scene-stealing comic talents of Sophie Lee, Aaron Pederson and David Gulpilil. Their star turns, however, are upstaged by the wickedly animated Mimi who wreaks havoc before being lured into a stainless steel fridge and unceremoniously dumped in a waterhole by Gulpilil who declares, ‘Whitefellas aren’t ready for you yet, Mimi.’ Nothing is what it appears to be in this film which delights in improvised mimesis. A plastic-wrapped chook from the supermarket becomes a magpie goose with a feather stuck in its breast. A red cocktail dress and cosmetic cream become a makeshift traditional costume for ceremonially smoking Mimi out of the hall cupboard. A ‘real Aborigine’ is revealed as an errant grandson, more interested in chasing white girls than learning his grandfather’s culture. An Australian collector of Aboriginal art knows so little about where she lives that she dials 911 in an emergency, imitating the terrorised blondes dialling 911 in scary American movies. Mimi takes pleasure in using comic-horror conventions to joke about authenticity, upsetting expectations and undoing pretensions in an original display of visual and verbal wit. Although the delightful Mimi is returned to the waterhole, there is a sense in which Mimi imagines something beyond the return home, reconciled moments between past and present, or the stoic survival of everyday life as suitable endings for indigenous stories. Mimi proposes a spirited quick-wittedness as an inventive, ethical response to the dilemmas posed by black and white encounters within modernity. The distance between the personal watercooler and the outback waterhole is imaginatively traversed in this film, inventing a playful space for unpredictable conversations between indigenous tradition and Australian modernity.