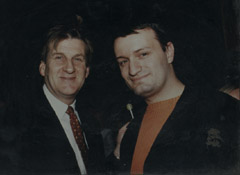 Richard Wolstencroft is the director of the Melbourne Underground Film Festival, aka MUFF, commencing its second annual season in 2001 from July 5-15, and is the director of the sometimes lambasted, othertimes piecemeally praised, festival-launching feature film Pearls Before Swine (1999). Wolstencroft also directed the underseen Tottie Goldsmith vehicle Intruder (1993) and co-directed the cult vampire/gangster film Bloodlust (1992) with Jon Hewitt of Redball (1999) infamy. He is the proprietor of the Hellfire Club and has renown in the industry locally for a certain splenetic and sprawling monologorrhea. He has “authorised” this interview for publication.

Why, Richard, do we need MUFF?

Something must be done to stop the entropy of dull independent filmmaking in this country! We need to carry on from last year’s inaugural MUFF to ensure there’s an ongoing place in our film culture for the films and filmmakers the ‘cabal’ of industry mediocrity would rather you did not see. Not everyone wants to see “polite, safe, slice of life, coming of age dramas and comedies” ad infinitum. In fact, no-one wants to see them at all! And yet they are churned out and churned out and given funding by the Australian film industry, and the Australian public 9 times out of 10 just has no interest in them whatsoever. The funding bodies desperately need to hunt out new talent like avid little boy scouts and help new filmmakers through the imposing bureaucracy that deters a lot of creative individuals from entering the hallowed halls of government funding. Unusual, new creative voices are ready now to speak, voices beyond the control of the ideologues of yesteryear, the bureaucrats and leeches that have grown like parasites on the shores of our film culture since the ’70s, monopolising the film thought and culture of a nation.

MUFF intends to go where no other Australian festival has gone before, with the exception of last year’s MUFF. This is for the good of upcoming filmmakers and the public alike – we are trying to educate the ‘cabal’ that, in breaking with traditional Australian film industry mediocrity and supporting the very types of films we’re championing, the Australian film industry will benefit as a whole. MUFF is an attempt to do something streetwise, contemporary and NOW, aimed at the harmony of thought and action, and we are moving toward MUFF’s potentiality of Being to become the most authentic and daring festival on the Australian film landscape.

You had mooted something called the “Melbourne Underground Collective.” What is/ was MUC?

Yes, an open call to arms for underground, exploitation and cult filmmaking. The idea for the Melbourne Underground Collective (MUC) was inspired by my own experiences with making low budget films and the need for a network to get things done, and to be a general virus of creativity on the corpse of industry mediocrity. The idea was to form a means to provide contacts for low budget filmmakers to do their work without the interference of ideologues, bureaucrats, negativity and bores. The Collective aims to supply a mutliplicious rhizome of contacts to enable new projects to develop, grow and enter into “being” through a network of support for independent filmmakers.

Now, some folks locally name of Greenfilm have organised something very similar to this and held some well-attended meetings lately, and so have been invited by MUFF to operate a couple of sessions during the festival, which invitation they have accepted. This is great to see, the principles espoused by MUC being embraced by a mass of people whom, through their fostering of their own talents amongst one another has them operating and placed further outside of the risk of becoming brain washed/processed too much by the establishment, and should before long lead all of them to producing films demonstrating more creativity, voice and talent than the last twenty government funded wanks.

Why have you decided not to go directly up against MIFF this year?

While starting from fertile ground of anger and disgust last year with MIFF, MUFF has very quickly springboarded into something transcendent of its initial motivation. This year, James Hewison’s MIFF appointment is excellent and bodes well – there is no need for us to run concurrently by way of a “protest” this year, and it’s better we all think that we pip MIFF this time and run just before them – let’s let MIFF’s bastard son get the first word in this year and not have to scream itself hoarse for attention.

Going directly up against MIFF last year ensured much publicity and led to much contemplation in the local film community as all the superabundant spleen vented by many a baffled and angered MIFF-rejected filmmaker and by other filmmakers and jaded filmgoers alike sympathetic to their plight helped kickstart a vital and obviously very timely dialogue here about our expectations of our film culture and industry, very effectively exploring the full ersatz enantiodromia of the problematic of our film culture bodies’ terminal myopia.

We threw MUFF together last year in no more than 3 months. That mad rush lead to a little lateness with publicity and catalogues, unfortunately meaning that the festival only started getting really busy as the event was in its final few days. So much though has been learnt in the last year; last year’s festival led us up a very steep learning curve and the literal handful of us running the show were absolutely flat out the entire time but we got there baby!

What can we expect in MUFF this year?

MUFF is a screening forum devoid of old fashioned agendas and tastes. We were attacked in some quarters last year by pedants stickling over the issue of what defined “underground” and “underground film.” This is an irrelevance and a distraction – our brief here is to play anything that is falling/ has fallen through the cracks of our film culture as dictated to us by the ruling elite.

Again this year we have received and sought a great variety of marginal and marginalised films, and they’ve been coming from everywhere. Of course there a number of new local films, many of them guerrilla efforts produced without support from local distributors or unions, without government money or support from established festivals. And again our new features will be in competition before a jury, including a batch of new Dogme films which we’ve secured.

Michael Helms has joined the team again to add his wisdom on the New Zealand alternative film scene. I have always found it stupid and ignorant that the NZ and Australian industries don’t form closer bonds…we are so close…this will be MUFF’s humble contribution to OZ/ NZ film relations.

A crucial part of the New Zealand section is Matt Boyle and Chris Howard’s Peter Jackson retrospective, which couldn’t be any timelier. The same pair are also behind a presently still slightly nebulous section of the festival examining the validity and necessity of censorship, which ties in nicely with the recent release of a cool book, See no Evil, a Headpress imprint on cinema censorship and shocks from the video nasty days to the present. We’re even at this late moment still engaged in a dialogue with the OFLC bigwigs as we determine just how best to skew this section’s programming and our take on the debate to everyone’s satisfaction.

We have Part 2 of our retrospective of Oz cult cinema; Bill Mousoulis has agreed to help source some interesting stuff for our Australian retrospective and we will also play his excellent Ladykiller – a Super-8 “Godard meets American Psycho” piece (exactly what we want at MUFF…something original and different). Shane Lyons is overseeing a twenty year retrospective of films made by the Melbourne Super 8 group. And MUFF assistant director and Klaus Kinski fanatical obsessive Rebecca Sutherland is using her “Klaus Initiative,” presenting a second showcase of the most original, adventurous and daring short works out there to make all the mainstream fests quake in their boots.

And still there’s more… but if I told you I would have to hunt you down and kill you. There’s a catalogue out soon, it’ll be out on the web site at www.muff.au.com come mid-June.

No, and that should I hope at last put paid to any snide suggestions that MUFF’s all about me, or all about Pearls Before Swine, as some would have you or would have had you believe. But on Pearls, I am presently seeking a distributor, and it’s just been passed and rated ‘R’ here by the OFLC. I believe in the meantime you can purchase a copy of it on the Web from some guy in Finland.

I’m the first to admit my rantings can be over the top but I tell you what scares me the most when I look around at the support given to true guerilla/underground/alternative filmmakers, events and cinema in Australia. The thing that scares me most…is I just might be right! Yikes.

Remember folks, whatever it is, you can do it yourself with will, passion and a lot of blood, sweat and tears. Why just sit back and leave the cliquey, cultural elitist Australian film cabal to fuck the corpse of a virtually non-existent industry? Australian Film has wallowed in complacency since its Renaissance in the 1970s. MUFF vehemently opposes film mediocrity and will keep a sharp eye on Australia and its position as a new Utopia for film kultur.