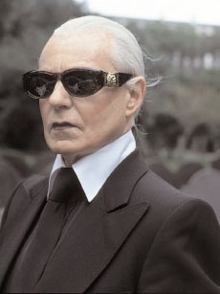 In bringing Thomas Middleton’s Jacobean drama The Revenger’s Tragedy to the screen in terms of a futuristic, dystopian vision of a British society in the aftermath of a catastrophe that destroyed a large part of the earth, Alex Cox invokes the tradition of Middleton’s era to set plays of social comment in foreign times or places. This had the effect of enabling the author to confront contemporary political issues whilst avoiding their specifics. The benefit of so doing was to sidestep debate as to the literal details of the given society and thus gain a clearer perspective on the essentials of the issues tackled (and, of course, sometimes to avoid retribution for criticism from the powers that be). By making a film set in 2011 peopled by characters speaking 17th century English, Cox doubles this distancing.

The landscape of Cox’s Revengers Tragedy (2002) could be said to resemble contemporary Britain as perceived through a dream. Superficially the flamboyant and even camp theatricality of the rather datedly futuristic fashions of this world, closer to Glam than Mad Max (George Miller, 1979), seem as removed from the present as the play’s original dialogue, the odd modern expletive notwithstanding. But these free-floating cultural coordinates are married and welded into a coherent aesthetic structure by the omnipresence of various camera perspectives, starting with satellite images of the devastated earth going through several switches to security and television camera pictures and concluding with familiar historical stock footage. The deliberately tacky, MTV style adopted at these times is on one hand a comment on the decadence and vulgarity of the film’s new ruling nobility. But it also serves to connect the reality of this world to our reality; it might be fantasy, but these visual codes, familiar to us all, make it a media-reality, a contemporary social realism not of the subject but of perception.

It is through the fabric of this nightmare, at once so familiar – even the futuristic costumes and make-up seeming more half-remembered than newly encountered – and so strange, that unsettling reflections of today’s world begin to surface: immanent consciousness of recent disaster (Cox wanted to end Revengers Tragedy with images of the Twin Towers tragedy but was prevented from doing so by the film’s backers); the sharp division of society into the very rich and very poor; lawlessness in the streets; a vulgar and exploitative media. It is the last of these that gives Cox the occasion for the film’s boldest and funniest stroke. The iconography associated with the hysteria surrounding the death of Lady Diana is slyly recreated in television footage surrounding the martyrdom of a virtuous young noblewoman, raped by one of the villains.

In recent years several directors have attempted to adapt Shakespeare to a sort of alternative universe, but in general these films lack the richness Cox brings to his vision of Middleton’s text through his subtle play on contemporary events. Yet Cox also avoids didacticism and on the few occasions when he is obvious in his analogies – most notably in the Diana pastiche – they are always handled with irreverent humour. Gleeful irreverence has been a frequent characteristic of Cox’s cinema and never more so than here. Far from being depressing, Revengers Tragedy unfolds with a demented, bloodthirsty playfulness. If one shot encapsulates the tone and style of the entire film, it is the hero, conspiring avenger Vindici (Christopher Eccleston), turning straight to camera and giving the audience a big wink!

In following his schemes to bring down the corrupt ruling family of the lecherous Duke (Derek Jacobi) who murdered Vindici’s bride on their wedding day ten years before, the audience is in the position of Vindici’s co-conspirators, revelling in each new blow he strikes against the family. Not that the Duke’s villainous clan is a particularly difficult target – when Vindici arrives in town, like the mysterious, haunted hero of one of the Spaghetti Westerns Cox so admires, the family is already on the point of self-destructing through jealousy and squabbling. But Vindici himself overestimates the extent of his control over the narrative and, by extension, our identification with him. The film opens in outer space and, after Vindici is ambushed, his vengeance accomplished and very close to assuming power, it closes with apocalyptic (if rather shopworn) images of nuclear explosions. It is as if Cox allows fate to hand over control of events to Vindici for the specific purpose of destroying the Duke, only to cruelly wrest it from him when this is accomplished – all part of a nihilistic, cosmological joke with the last laugh on Vindici, who has been laughing throughout.

Revengers Tragedy is as much a film about the Duke’s family as it is about Vindici; that is to say, it is a film about power and lust for power. Power as a corrupting force is a theme Cox already tackled in Walker (1987), but that film looked at the feverish delusions of power from the inside and followed the whole ascending trajectory of a regime into its decadence and insanity. Revengers Tragedy shows a regime already on its way down and out, with the swelling forces of anarchy and annihilation waiting in the wings. Its point of view is that of Vindici, a force of destruction external to the centre of power, in love with death in the form of the skull of his beloved, which he carries with him and talks to. Common to both films is a mirroring of contemporary issues via a fluidity of setting, manifest in Walker in the inclusion of anachronistic details such as Coca-Cola bottles, issues of Newsweek and helicopters in its recreation of the 19th century – science fiction projected into the past instead of the future, as Fellini described his Satyricon (1969). They also both make effective and exceptionally unbridled use of Cox’s gallows humour, but to slightly different ends. Whereas Walker builds through a fragmentary series of increasingly outrageous set pieces to a distanced, dazedly visionary image of colonial hell, Revengers Tragedy encourages intense character-audience identification and is driven by a tight, highly adrenalised sense of plot. Thus, the humour in Walker highlights the grotesque and inspires horrified disbelief rather than mirth (I wouldn’t exchange the image of a dementedly grinning Ed Harris eating a piece of a wounded soldier on an operating table for a hundred Apocalypse Nows!) whereas in Revengers Tragedy it functions to make palatable Vindici’s schemes.

Revengers Tragedy marks a break in Cox’s formal approach to his material, abandoning the long takes that have characterised his work throughout the ’90s. Not that there was really such a thing as a Cox long take, in the way that there is an unmistakable Angelopoulos long take. Rather, over the past ten years his project might very well have been to explore the various possibilities that the long take presents. In Highway Patrolman (El Patrullero, 1991) his long takes are intensely physical, bringing the audience close to the pain and discomfort of its protagonist. In the tremendous Three Businessmen (1998), they are architectural, allowing the nocturnal cityscape backgrounds to establish their importance in the drama. But both of these have a detachment and an austerity traditionally associated with the master shot. If any film managed to emancipate it from these associations, it is Death and the Compass (1996). The dizzyingly dynamic use of frequently disrupted and disruptive long takes proves that they can serve chaos as ably as they do lucidity.

Revengers Tragedy has a denser visual style incorporating, as already mentioned, images formed by means interior to the setting – satellites, television, security cameras. These function to heighten a very important strategy deployed throughout the film, namely the transformation of event into spectacle by characters and forces within the movie. Not only does Vindici carry out his revenge in a fashion so theatrical that he actually ends up murdering the Duke on a bedroom ‘set’ constructed in a football stadium, but the media-eye constantly interjects, as in the ‘Diana’ martyrdom. Vindici’s theatricality adds to both the sense of relish with which the viewer shares in his acts and their inherent insanity. The presence of television is one of the symptoms of the almost universal falseness of this society. Everyone is acting; everyone is fooling someone, cheating someone, bullying someone – in short, performing. It is a dark take indeed on the saying that ‘all the world’s a stage’ but, as visible in the emphasis on a constant generating of spectacle from the opening satellite image on, it is a viewpoint evidently not lost on Cox. 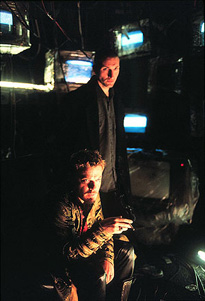 Music is also crucially important, both the pulsing Chumbawumba soundtrack that sets the intensity of the pace, and its interaction with the music of the play’s language. The contrast between the archaic dialogue and up to the moment rhythms of the score is surprisingly effective. They compliment each other to the point that if the film were played with no picture, sections of it might succeed as a sort of opera recording.

Perhaps above all, Revengers Tragedy is an actors’ movie. Under the right circumstances, Christopher Eccleston is a forceful and imposing screen presence. He is admirable as Vindici and ably supported by Eddie Izzard, Margi Clarke and Andrew Schofield. But Derek Jacobi easily dominates the film with an astonishing performance as the Duke. He emanates sheer physical brutishness and barely contained violence with a tightly wound intensity that gives the impression of a walking time bomb. Without a doubt, he has created one of the most genuinely frightening villains in recent cinema.

Even if Revengers Tragedy does not represent a new masterpiece on the level of Three Businessmen or Highway Patrolman, it is certainly a work worthy of Cox as one of the four or five truly great British filmmakers working today.