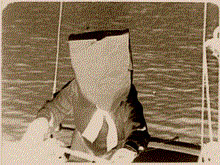 The films of Leslie Thornton have helped to define the very nature of contemporary avant-garde practice. Her work has been consistently in the forefront of that tendency which takes a theoretical and critical analysis of the cinematic image as a central concern, while conducting a painstakingly detailed interrogation of the texture of a highly-mediated everyday life. Thornton’s films directly engage with issues in feminism, colonialist/post-colonialist studies, semiotic theory and cultural analysis. They demonstrate a rich and provocative attention to relations between sound and image and the syntactical potential of the film form. Experimenting with multi-media, specifically the relation between film, video, theater, and still photography, Thornton explores the limits of representation and the myriad discursive relations of spectators to images.

Many claim that the Peggy and Fred in Hell series (1985-1996 and beyond) is the most striking and influential aspect of her creative work (to cite Bill Krohn’s 1993 review in Cahiers du cinéma: “[Thornton’s] place in cinema history has already been assured for the sole reason that she is the author of Peggy and Fred in Hell.”) This series is an extremely innovative, indeed path breaking approach to the concept of the “work.” Dealing with intertextuality, citation, and over- or hyper-codification, and investigating the very structure of filmic representation, Peggy and Fred has been described by Thornton herself as a lifetime project. Peggy and Fred is in many ways exemplary of Thornton’s method and technique. Like many of her films, it makes sustained use of found footage, integrating the material within her film to give it a unique inflection, producing a new readability. It also and paradoxically makes use of an approach of “improvisation,” a constant receptivity to the contingencies of the very process of filmmaking and of the aging process of her subjects (two young children at the start of her project who have since grown to young adulthood). Finally, it refuses to acknowledge the traditional notion of the boundary or frame constituted by the finished work, reveling instead in the interminability of process.

Thornton has continued to work on the Peggy and Fred in Hell series, editing a new form of the project which foregrounds the narrative aspects of the material. Since 2000, she has completed three new episodes: Bedtime, (4 minutes, b/w, video, 2000); Have A Nice Day Alone, (7 minutes, b/w, video, 2001); and The Splendor, (3 minutes, b/w, video, 2002). Thornton has also taken the material for this project into a new realm—that of the installation. In 1999, she was invited to do an installation for a major exhibition, “Presumed Innocent” (on images of children in various art forms) at capcMusée d’art contemporain de Bordeaux. This installation, Quickly, Yet Too Slowly, situates footage from Peggy and Fred in Hell and new material in a space designed for the intermittent and open-ended time of museum viewing. Thornton is currently using some of these elements in a more ambitious installation, The 10,000 Hills of Language, which deals with the conjunction of language, technology, and childhood.

Thornton has been particularly concerned with the intersections between historical periods of colonialism and their representations of the Other and the “colonization” of the female body, as well as the effects of technologies (particularly photography and phonography) on the experience of modernity. Her 1983 Adynata, which has been extensively reviewed and analyzed, circulates around a reading and filmic “reincarnation” of a formal portrait of a Chinese Mandarin and his wife taken in 1861. It addresses Orientalism and Western aesthetics in a rigorous and challenging way. There Was an Unseen Cloud Moving (1988) and Thornton’s current project, The Great Invisible (of which …or lost [1997] is a part), both explore the biography of Isabelle Eberhardt (a woman adventurer/explorer/writer who dressed as a man in order to travel freely in North Africa in the late 19th century). Here, Thornton is concerned with the competing and contradictory nature of the traces/documents/artifacts which are usually activated to produce a coherent narrative in the writing or filming of biography. Isabelle’s story is coincident with the emergence of technologies of representation (photography, phonography, cinema) which have been instrumental in the rendering of “history.” The Great Invisible will be released as a series of autonomous but interlinked episodes. Thornton is currently showing this film as a one hour work-in-progress in public venues (these include, most recently, the Pacific Film Archives, the Whitney, and the Cinema Texas Sixth International Short Film Festival). Her work on this project is in many ways similar to that on her earlier (and ongoing) series, Peggy and Fred in Hell insofar as she works both in sections, honing a particular piece or sequence, releasing it as an independent work, and then returning to it to revise and rework so that the context is continually mutating. Thornton is intrigued with the figure of Isabelle Eberhardt because she seems to condense so many crucial issues of the last turn of the century: colonialism and the lure of the exotic, gender difference and identity, the pressure of social and familial disease (neurasthenia), the fascination of anarchy, and the impact of new technologies (the railway, photography, film, phonography). The Great Invisible works to simultaneously embed and critique forms of narrative and to interrogate the category of biography. It is a difficult film, refusing easy linearity and performing an intense work on the image—its pleasure, its legibility, its historicity. Thornton combines found footage, enacted “historical” scenes, and “documentary” scenes of the present of the film’s making. Lighting, soft-focus cinematography, and the use of intertitles combine to produce effects of undecidability about the status of the image and to produce a parallel meditation on its historicity in relation to technologies of representation. 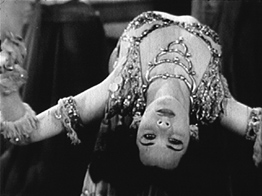 In 1999, Thornton completed two other films, unconnected to either The Great Invisible or Peggy and Fred in Hell – Chimp For Normal Short, (7 minutes, sepia, 16mm film) and Another Worldy, (24 minutes, b/w-color 16mm film). Chimp For Normal Short is a reworking of archival footage of a chimpanzee in various anthropomorphic poses/situations which dissects motion through reversal, repetition, and fragmentation. Another Worldy is a revision of an older film by Thornton, Old Worldy (1998), which juxtaposes old Hollywood footage of dance sequences (from the 1930s or 1940s), ethnographic footage of ritualized dances from “primitive” cultures, and an ironic rendition of 1990s techno-ambient disco rock on the soundtrack. The new film produces fascinating collisions and correspondences between the different materials, pressuring dangerously fixed assumptions about racism, sexism, and the ethnographic gaze. The film encourages tension but refuses easy satire and the assumption of a superior position. Both films have been shown at numerous festivals and museum screenings including the Cinématheque française in Paris, the Whitney Museum, the New York Film Festival, and the Musée Pompidou/Centre Georges Pompidou in Paris.

In 1996 Thornton was given the highest award in the field of independent filmmaking—the Maya Deren Award for Independent Film and Video Artists. This award has been granted to filmmakers of the stature of Kenneth Anger, Stan Brakhage and Yvonne Rainer. In addition, Thornton has received the Alpert Award in the Arts (she was the first Media Arts recipient of this award), a Rockefeller Foundation Fellowship, several Jerome Foundation grants, and National Endowment for the Arts grants. Her film and video work has been purchased for the Collections of the Museum of Modern Art, the Centre Pompidou/Beaubourg in Paris, and a number of universities, including the University of Michigan, San Francisco State, and the University of Wisconsin-Milwaukee. Thornton’s work has been extensively reviewed and widely exhibited. It has recently been showcased in festivals in London, Berlin, and Rotterdam.

Thornton’s work continues to evolve. The trajectory of her work reveals an increasing obsession with narrative as a form and, simultaneously, an insistent distrust of the idea of the static art object or the definitive version of a film. She has become something of a collector of marvelous images, both her own and those she discovers in the debris of film history, subjecting them to a working and reworking which seems to be without limit, and which reveals the aspirations of intermediality. In her film work, it is tempting to see the return of Benjamin’s aura, but in a form which embraces rather than resists technical reproducibility.