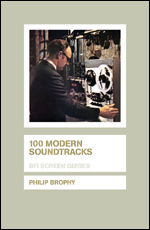 Philip Brophy has programmed his terrific yet frequently overstuffed new book, 100 Modern Soundtracks, like a CD. 100 two or three-page entries on films that apotheosise the modern “cinesonic womb” merge into an endlessly listenable compilation album. If any one track gets dull, zap it and move on to the next. Besides, Brophy would no doubt encourage a reader to move distractedly through his text remote control-like. In fact, reading barely concerns him at all – the interpretive, the synopsising, the decodable can all just fade away. Instead, he wants to transform us from readers into hearers in order to better grasp what he calls the unconsciousness of sound – “that requiring only the slightest act of hearing, placing sound as backgrounded, unfocused, diffused, ambienced” (p. 8). By compelling us to punch away at his tome from chaotic, unpredictable angles, Brophy hopes to prick up our ears to a sonic world that the insidious pull of narrative has cloaked for too long. Thus even if we read the book in order, it offers no teleological thrust. Brophy simply lays his objects of study next to one another alphabetically, from Akira (Katsuhiro Otomo, 1988) to Way of the Dragon (Bruce Lee, 1972). There is no prose-like or even polemical momentum to distract us from our distraction.

But in actuality, all this rhizomatic activity is an illusion. Take in only ten, maybe 15 entries and a meta-film evolves. The Convent (Manoel de Oliveira, 1995) collapses into Violated Angels (Koji Wakamatu, 1967), Escape From New York (John Carpenter, 1981) into Stalker (Andrei Tarkovsky, 1979) for a cohesive entity that is alternately robotic (the “sonically simulative technological processes” of Resident Evil [Paul W.S. Anderson, 2002]; the body as “percussive instrument” in Way of the Dragon) and all too human (the “psycho-sexual blips, glitches, gulps and groans” of Beneath the Valley of the Ultra-Vixens [Russ Meyer, 1979]; “the body as an indistinct, unnamed, anonymous lump” in death from Brakhage’s The Pittsburgh Trilogy [1971]).

This meta-film comes from no place in particular: “Sound’s bombast on the modern soundtrack is authorless and inhuman, yet directional and affecting” (p. 7). A word Brophy likes to use to denote this utopia is “alien” – perpetually Other, irreducible to language. As his meditations on Angel Dust (Sogo Ishii, 1997), The Birds (Alfred Hitchcock, 1963) and Rumble Fish (Francis Ford Coppola, 1983) demonstrate, human speech, if not humans themselves, hold no court here. Besides, as Brophy deduces, human speech results in “mostly an aural stream of the written, where actors – as per stage dramaturgy – are empty vessels through which the words of the author are breathed” (p. 13). Actors, then, never inhabit three-dimensional characters in the meta-film. Identity-emptying nodules like Crash (David Cronenberg, 1996) A Clockwork Orange, (Stanley Kubrick, 1971) or Blade Runner (Ridley Scott, 1982) require viral infiltration not The Method. In fact, they barely require directors. Therefore, it should come as no surprise that Brophy professes to have little need for auteurs: “Where are the auteurs in this book? Names are largely absent… This is in recognition of sound’s animist being – its pre- and post-human aura – which seizes the sonic senses with utmost embrace” (p. 15).

But while the sound of the meta-film may come from nowhere, Brophy continually charges it with assault and battery. Psycho (Alfred Hitchcock, 1960), Contact (Robert Zemeckis, 1997), and Resident Evil worm into the ear with an uncommon violence: “You neither watch Resident Evil nor play it: for its duration, you are played” (p. 193). With an arsenal of terms to describe the modern soundtrack’s much-maligned bombast, Brophy actually succeeds in extending the metaphors used to explore the relationship between cinema and modernity. Film scholars have long since abandoned literature as a model for cinema and even moved beyond theatre and the plastic arts to uncover cinematic correlations in trains, automobiles, museums, shopping centres, criminology (1) and the city. Brophy leaves even these behind to conclude that “cinema’s modern audiovisuality … has more to do with endoscopic exploration, plastic surgery, chemical alternation, electroshock therapy and nerve stimulation” (p. 4). The meta-film calls up the anxiety of being put under the knife, of being mental-healthed into oblivion. It slices into us and knows what’s better for us than we know ourselves.

Above all else, Brophy valorises the asynchronous. Like Michel Chion’s The Voice in Cinema, 100 Modern Soundtracks is an emancipation proclamation, struggling to free sound from its bondage to image. Akira sets the tone for the entire book: “The soundtrack…explor(es) the various ways that sound can be temporally split from image, for we most notice the effect of sound when it does not obey the constriction of image. In Akira, the sound of destruction is thus asynchronous (p. 18). Disdaining “mere coincidence or pointed synchronization”, Brophy positively gushes over that sonic matter which detaches itself from all dramaturgical imperatives and repeatedly pounds at the helpless auditor-victim.

So detached from image is this sonic matter that 100 Modern Soundtracks comes off as a fine piece of music criticism in the style of Simon Reynolds or Kodwo Eshun. At his best, Brophy matches Reynolds’ ability to find language for such seemingly unaccountable phenomena as trance or Can’s Soon Over Babaluma. And as with Reynolds, often his brilliant poésie surpasses if not replaces the object in question (his talk of “phallic sound effects” and “aural hard-ons” in Blue Steel [Kathryn Bigelow, 1989] teeters so closely on the edge of ridiculousness that his entry provides more of a rush than anything in the film itself). Certainly, Brophy means to align himself with such luminous scribes when he situates his soundtracks in a lineage Reynolds would definitely applaud (if only lineage itself were not so bourgeois and orderly): “These are the films that are textually filtrated with the voices of Glenn Gould, Phil Spector, Luigi Russolo, John Cage, Roland Barthes, Link Wray, Erik Satie, Kraftwerk, Yoko Ono, Harry Partch, Jimi Hendrix and Karlheinz Stockhausen, among others” (p. 4).

But if up until this point, Brophy has had his cake, smooshing it through his eyebrows and behind his ears like the prelinguistic infant-adult he so wants to be, here he wants to eat it too. As with Reynolds again, Brophy upholds the anti-egocentric only to reinstall a modernist, largely highbrow ego such as enjoyed by the list of forepersons above. For sure, he has lightly peppered his tome with names under no threat of auteurist resuscitation – Howard Deutch, Delmer Daves, Betty Thomas, Mier Zarchi, Fred Macleod Wilcox. But overall, 100 Modern Soundtracks is a testament not only to the director but to the genius director – Tati, Kubrick, Tarkovsky, Paradjanov, Altman, Oliveira, Godard, Lang, Pasolini, Brakhage, Resnais, Cronenberg, Fellini, Bergman, Jarmusch, Hitchcock, Welles (pumped for, of all things, Citizen Kane [1941]). No matter how hard he tries to shake it, most of the 100 soundtracks emanate from exactly this type of legible and praiseworthy agent. When Brophy hears helicopters and synthesisers swirling around him in Apocalypse Now (1977) he may not be picturing Coppola. But a “sensorial, phenomenological and perceptual” focus does not make a sender (in this case, Coppola) evaporate (p. 15). Sensation is still a message sent and in 100 Modern Soundtracks, senders outweigh receivers as they counter-intuitively pop up in many of the book’s crevices. Why, for instance, include a table of contents that identifies each film by year and director in a book excoriating the Self and the linear? (Hell, why even have a table of contents in the first place?)

That the scale is tipped towards the director/sender is only exacerbated by the assaultive nature of the soundtracks discussed. “Sound is hurled, jettisoned and directed at the audience only in order to figure how sound can resonate with the body of the viewer; how sound itself can attain a bodily presence which sets up a sensational dialogue with our bodies and minds”, Brophy maintains (p. 6). But he rarely leaves room for dialogue, sensational or otherwise. The sound hits the audience/receiver with little chance for feedback or even fusion. Any sort of give and take would most likely give birth to a hermeneutic Brophy is hellbent on destroying. And as one of cinema’s incorrigible moralists whom Brophy disdains in his review of De Palma’s Scarface (1983), I must point out that the receiver of all this sonic violence is often a woman in the film. Given his anti-humanist bent, it seems at times as if he relishes the precarious positions greeting Emily in House by the River (Fritz Lang, 1950), the nurses in Violated Angels or Regan in The Exorcist (William Friedkin, 1973).

If indeed a meta-film emerges from 100 Modern Soundtracks, its negative is, of course, the classical Hollywood film. Despite the appearance of House by the River, Pride of the Marines (Delmer Daves, 1945) and hoary old Citizen Kane, pre-1960 Hollywood cinema is an obvious structuring absence here, a point Brophy makes perfectly clear in his introduction:

Somewhere between the death of live musical accompaniment to so-called silent cinema and the wide application of Dolby surround sound in theatres, the soundtrack lay spatially dormant. That is, whatever ‘space’ was signified by any on-screen or off-screen sound was technologically and ontologically streamed from the front-on emission of the screen (p. 7).

But beyond even its putative spatial dormancy (I’d advise Brophy to look at Thunderbolt [Joseph von Sternberg, 1929], Rain [Lewis Milestone, 1932] and Hallelujah, I’m A Bum! [Lewis Milestone, 1933] for some ontological counterexamples), the classical Hollywood cinema’s greatest sin is sync sound. To Brophy’s ears, cinema becomes pregnant with the most possibilities when an imbalance occurs between the audio and visual tracks. But the irony here is that sync sound is itself an imbalance. This seemingly most natural of classic cinematic sound phenomena happens only through the highly unnatural process of manipulating at least two separate pieces of material – a film track and a sound track.

There’s something downright ooky about this hocus pocus process. Thinking back to my film school days while reading this book, I was shaken to recall that the first piece of film I ever synced up to sound was footage that I had shot of my husband. It was as if I was compelled towards this action in order to face the operations of fate that brought us together. The sheer weirdness of sync sound (itself a fateful operation) dramatises this dance with chance; to use Walter Benjamin’s words, it is “a disorder to which habit has accommodated itself to such an extent that it can appear as order” (2).

But one need not be slumped over a Steenbeck to receive this jolt. As the recent furore over Ashlee Simpson’s lip-syncing gaffe demonstrates, we always have access to moments that highlight the imbalance of sync sound. And then we return to these “natural” sound-image packages in what Peter Knight calls a hermeneutic limbo (3). Reading 100 Modern Soundtracks, though, one walks away feeling that this limbo is solely the self-conscious preserve of great directors and their cinemaniac worshippers.

Still, Brophy accomplishes what all great writers on film do – he sends you back to films with refreshed capacities. The first film I saw after finishing 100 Modern Soundtracks was Rossellini’s Voyage to Italy (1951). All those images of fate and chance began life anew, detonating with folk song, voice grains and an eerie, paradoxical lack of presence. And it was all because Brophy’s book had slathered my ears with fibre-optic caviar.