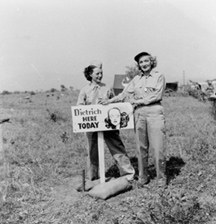 Past and present met at the Potsdamer Platz, heart of the 52nd Berlinale. The main program forced adventurous visitors to take refuge in the Panorama program and the retrospective devoted to European cinema of the 1960s.

The rumour that the Sony Building – a focal point rising high above the Potsdamer Platz – was built right on top of Hitler’s old bunker (hence its reputation as a ‘sick building’), was frankly dispelled during the event. A local taxi driver at the Potsdamer Platz was very resolute about it. Without being asked to do so, he drove me to a spot a few hundred metres away, and pointed at a sandy plain, spotted with cranes. Together we looked upon this place and did our best to transform in our minds this fallow piece of land into the historic place where, 56 years ago, Hitler committed suicide.

It was a shame that I had just missed Im toten Winkel: Hitlers Sekretärin (Blind Spot: Hitler’s Secretary). In this documentary portrait by Austrian filmmakers André Heller and Othmar Schmiderer, included in the Panorama program, Hitler’s former private secretary dared tell her story for the first time on camera. The 81 year old Traudl Junge, who died from cancer just a few days after the Berlin premiere, was in that bunker with Hitler.

It haunted me all throughout the Festival. What kind of story did she tell? Which details did she remember? Did she go back to the place at the Potsdamer Platz where she once scribbled the Führer’s testimony on a piece of paper? I’m afraid I will have to wait for the International Documentary Filmfestival Amsterdam (IDFA), where the film is to be shown this November. I bet that this portrait of Hitler’s secretary will be shown together with the new Leni Riefenstahl film, Impressionen unter Wasser (Impressions Under Water), promised to be ready for Riefenstahl’s 100th birthday in August. How heroically can underwater life in the Indian Ocean be filmed?

One could even conjure an interesting triptych on ‘Hitler’s Women’, if one added to these two films a strange new documentary portrait of Hitler’s adversary, Marlene Dietrich, made by her grandson, J. David Riva. In the Panorama entry Marlene Dietrich: Her Own Song, no serious attempt was made to portray Dietrich as an actress. This film presented her as Germany’s greatest war hero. Much attention was given to her decision to leave Nazi Germany for Hollywood at an early stage, and her visits to the troops in Europe. Around me, in a packed auditorium, some people softly sang along with the famous Dietrich songs “Sag mir wo die Blumen sind” and the more suggestive “You’re the Cream in My Coffee”.

Berlin is madly in love with Dietrich, as was clear from the exhibition on the occasion of her 100th anniversary in The Filmmuseum Berlin Deutsch Kinemathek. Her black velvet Dior brassiere and her famous, translucent Las Vegas dress were there, together with many handwritten tokens of love – scribbled notes by Orson Welles, Alfred Hitchcock, Romy Schneider, Grace Kelly, Jean Cocteau and David Bowie, all great admirers. Even more intriguing were the songs that could be heard, for instance a hoarse William S. Burroughs performing, accompanied only by a tinkling piano, “Ich bin von Kopf bis Fuss auf Liebe eingestellt”.

Perhaps Maria Riva felt somewhat uncomfortable at the end of it all. Dietrich’s daughter, who some years ago wrote a far from flattering biography of her showbiz Mum (Marlene Dietrich, Ballantine, 1994), was now full of praise in this new documentary made by her own son. It made for a strange switch.

Intriguing capers were also stirred by the 37-year-old German director Christopher Roth. In his Competition entry Baader, he focused on a more recent, traumatic part of German history. Red Army Faction terrorists Andreas Baader and Gudrun Esslin (active from 1967 to 1972) were given a hip, Bonnie and Clyde treatment. The audience roared when Roth introduced his film with a hail of bullets for Baader. Total astonishment led to post-screening questions about why Roth had given Baader a sensational, heroic death, when in reality the terrorist committed suicide in a German prison cell. Roth could not come up with a convincing answer. 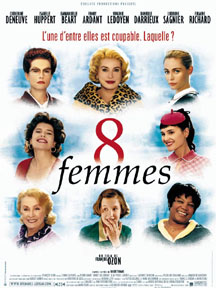 The new Berlinale director Dieter Kosslick came up with a curious selection. François Ozon’s all-female project 8 Femmes (justly awarded with a prize for ensemble performance) was a real highpoint. In Ozon’s murder mystery/musical, the subtle hip movements of Fanny Ardant, Catherine Deneuve and Isabelle Huppert could even be regarded as a response to Baz Luhrmann’s devilish editing trick, Moulin Rouge (2001), in which the question ‘can Nicole Kidman actually dance?’ remains shrouded in mystery. 8 Femmes is a joyfully cinephilic genre exploration, inviting such questions as: ‘In which Douglas Sirk film did I see that inquisitive deer?’ And its song scenes are truly touching, with the 84-year-old French screen legend Danielle Darrieux delicately offering “Il n’y pas d’amour heureux”, a bittersweet song about unhappy love affairs that could have been performed by Marlene Dietrich.

Apart from 8 Femmes there was Halbe Treppe (Grill Point), in which the promising German director Andreas Dresen presented a strong, Loachian take on the humble lives gathered around a sausage stand. Marc Foster’s Monster’s Ball tried hard to keep the right balance as an interracial drama in the sweaty South, with glowing performances by Billy Bob Thornton and especially Halle Berry. These films were presented alongside rather distasteful American productions like Lasse Hallström’s The Shipping News and Ron Howard’s A Beautiful Mind. The Alzheimer woes of British writer Iris Murdoch, as presented in Richard Eyre’s Iris, were the height of calculated sentiment.

It was especially such disappointments that made one flee to the great retrospective of European films of the ’60s. One could, for instance, see Edgar Reitz’s feature directorial debut Mahlzeiten (Mealtimes, 1966), shot in grainy black and white, on a big screen there. This turned out to be a modest prelude to his marvellous Heimat chronicles that appeared in 1984 and 1992. Completely fascinated by Reitz’s storytelling, I remember watching all 26 hours of Der Zweite Heimat: Die Chronik einer Jugend in a row – well, nearly in a row. This meandering, melancholic story of a group of musicians and film students in Munich between 1960 and 1970 will now be followed by Heimat 3. Fortunately, after some financing problems, shooting has recently started. And of course, the lecture on filmmaking in the ’60s by the 69-year-old Reitz, in a little room in the Berlin Filmmuseum, was something to be treasured. Heroes will always be heroes, as was also evidenced by Der Stadtstreicher (The City Tramp, 1965), the first, remarkably playful black and white short by Rainer Werner Fassbinder, about a befuddled tramp in town.

Alongside the French, Italian, British, Scandinavian and Eastern ’60s there was the less explored Dutch ’60s. It was interesting to discover that Adriaan Ditvoorst’s Paranoia, Nicolai van der Heyde’s Een Ochtend van zes Weken and Wim Verstappen’s De Minder Gelukkige Terugkeer can Jozef Katus in het Land can Rembrandt, along with the short Herman Slobbe by the recently deceased Johan van der Keuken, represented our rainbow years. This is curious, because to my mind Turks Fruit (Turkish Delight), made by Paul Verhoeven in 1973, captured the atmosphere of the ’60s like no other Dutch film. Alas, the strict boundaries of ’60s culture, as defined by this retrospective, excluded this magnificent movie that tries to keep up with Rutger Hauer on a crazy motorbike trip across Amsterdam.