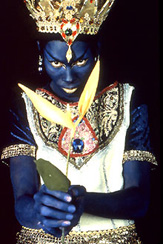 Contrary to the publicity materials describing the film as “not a documentary film or a traditional feature film”, The Diaries of Vaslav Nijinsky is in fact a “documentary” about the Russian born dancer Nijinsky – but this is no ordinary documentary film. This is not the traditional television-style documentary that audiences have become used to: the film does not use a narrator, nor does it include the usual interviews with family, friends, colleagues and critics, intercut with shots of the dancer at work, at home, or walking down the street or along some deserted beach. Nor is it the fly-on-the-wall observational style of documentary that has come to be regarded by many as the only true form of documentary filmmaking. (This would after all have been impossible as Nijinsky died 50 years ago.)

Rather, The Diaries of Vaslav Nijinsky pushes the boundaries of the documentary form. This film is pure cinema. It is a rare cinematic portrait of the artist. In a world where most cinema has become predictable in its form, and where the narrative structure dominates above all else, it is refreshing to be taken on a cinematic journey and to succumb to the beauty of the experience. This is cinema which flows from the screen with kaleidoscopic images taken directly from and inspired by the thoughts and words of Nijinsky.

This is not Cox’s first major documentary film. He previously made Vincent (1987), a filmic portrait of the artist Vincent Van Gogh, based on the letters of his brother Theo, and read by the actor John Hurt. With The Diaries of Vaslav Nijinsky, Cox has taken his approach to documentary filmmaking practice much further and has subsequently made a denser, multi-layered, impressionistic film.

This film is based upon the published diary “Cahiers” which Nijinsky wrote in 1919 during an extremely traumatic period of his life. In 1917 Nijinsky, together with his wife and daughter, retreated to St Moritz in an attempt to escape his overbearing mentor Diaghilev and to await the end of the war. During this time he recorded his inner turmoil in a series of notebooks. Nijinsky has been hailed as one of the greatest dancers of all time yet his career was relatively short – he danced on the stage for only ten years. He was a victim of his time and place, with WWI leaving him stranded in Europe with little opportunity to perform. Unfortunately mental illness overtook his life and he was committed to an asylum for the final period of his life. He died in 1950.

In the 1960s Cox heard Nijinsky’s diaries read by the British actor Paul Schofield on the radio. The words of the diaries haunted him and he eventually found a copy of the diaries in a bookshop in London. They had been first published in English in 1936. He read them and it made a huge impression on him. “I was not even a filmmaker at the time”, Paul recalled after a recent screening and discussion of the film in Melbourne. Then in the mid 1990s, Cox was contacted by Nijinsky’s adult daughter after speaking about the film proposal on American television. The film would eventually take three 3 years of work; it was finally completed in 2001.

All Paul Cox films begin with the music. In The Diaries of Vaslav Nijinsky Cox says the music is primarily the words from the diaries, as read by Sir Derek Jacobi. Paul first met Jacobi during the filming of Molokai – The Story of Father Damien (his 1998 feature film, to be screened in Australia in 2002) and “found that working with him was like working with the most wonderful instrument.” The rhythm and tone of Jacobi’s voice is complemented by classical ballet music and original music by Paul Grabowsky.

The visuals that he has built upon this music/ soundtrack consist of many of Cox’s trademark images: the grainy Super 8 footage of trees, flowers and weathered tombstones. One of the strong recurring motifs is his use of shadows, in particular shadows falling across running streams, sliding down stone steps or leaning against walls. For a filmmaker there are no more basic elements at work than the play between light and shade.

There are other familiar Paul Cox images, either shot specifically for this film or acquired from his own film archives. Images of large waterbirds (in this instance herons) gently move across a winter sky. Paul shot and used these as both a reference to Nijinsky’s own drawings of cranes and as a reflection of Nijinsky’s dance portrayal of a crane. From his personal library of images Paul has used footage shot almost 20 years ago of his daughter Kyra at age 3, representing the role of Nijinsky’s own daughter Kyra.

Cox has treated many of these recurrent images and themes in a painterly way. Sequences unfold gradually, as frames of film are stretched in time using the technique of step-printing, thereby allowing the viewer the time and space necessary to absorb the most minute details within the frame: a flower opening slowly, a bird flying in a staggered motion, or the abstract nature of bare tree branches silhouetted against a cold winter sky.

As The Diaries of Vaslav Nijinsky is about a dancer, Cox has treated the form of his film as a dance. Many images are repeated, they sway back and forth, and days later they still swirl around in one’s consciousness. One of the most memorable scenes is a recreation of Nijinsky’s ballet portrayal as one of two cranes dancing. These are long uninterrupted shots lasting two or three minutes where the camera too becomes part of the dance as it weaves gently between the performers. As Cox says, “Film is a dance. You must keep the shot going … you must feel the dance. With a long take, it is a ballet of sorts.” After a pause he added “… and also, it stops all the options (of cutting away)”. 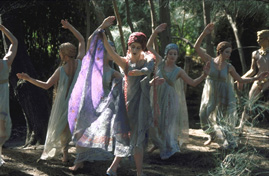 This film was a labour of love for Cox. He did much of the cinematography himself in addition to the writing, directing, co-producing and editing. How he came up with the final form or shape of the film is something that he cannot explain easily. “I don’t understand it” he says, “I just sort of started … it was done with great difficulty and with humbleness. It was a dark search … I went into the mountains and it just started there.” On editing the film, Cox says he spent long hours working alone, often through the night. Sometimes he fell asleep at the editing desk and didn’t wake again until the early morning. But he acknowledges this was the process that he had to follow. “It was like being a priest – no, an altar boy – working in front of the Steenbeck, and the Steenbeck was the altar …” Then he added with a smile, “sometimes I became the priest.”

Cox has great respect for his subject, Nijinsky, and he speaks with great affection of him “Nijinsky was a beautiful spirit. He went mad because of his love of mankind. We live in a world that has gone crazy – it is no wonder that souls like Nijinsky go mad.”

Finally, if as Cox has said “This was the film I always wanted to make, and every other film was just leading up to this,” then the question for Paul Cox as a filmmaker must be “where to now?”